ALL I WANT FOR CHRISTMAS 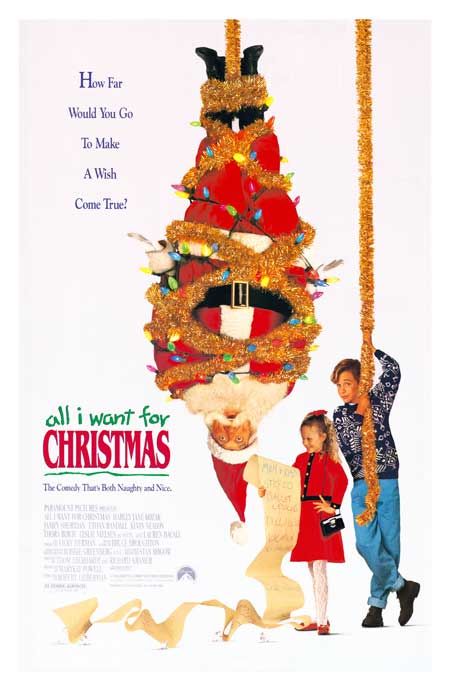 Determined to unite her divorced parents, seven-year-old Hallie goes to Macy's to tell Santa ALL I WANT FOR CHRISTMAS. Hallie's thirteen-year-old brother, Ethan, and girlfriend, Stephanie, concoct a well-meaning but mischievous scheme to make her wish come true. ALL I WANT FOR CHRISTMAS is an uplifting, pro-family film which proclaims the true meaning of Christmas as a church school choir sings "God Rest Ye Merry Gentlemen," though there is a twinkling nod toward A MIRACLE ON 34TH STREET.

ALL I WANT FOR CHRISTMAS is an uplifting and humorous film reminiscent of the Golden Age of Hollywood. The film opens with a church school choir proclaiming the true meaning of Christmas by singing the famous carol “God Rest Ye Merry Gentlemen.” The song reminds us to “Remember that Christ the Savior, was born on Christmas day. To save us all from Satan’s snare lest we might go astray.”

After the choir practice, thirteen-year-old, Ethan, takes his seven-year-old sister, Hallie, home. In the ensuing conversation, it becomes clear that all they want for Christmas is for their divorced parents to be remarried.

However, the desire to bring the O’Fallon family together for the holidays requires more than a “Ho Ho Ho” from Santa. Evidently, Mike and Catherine O’Fallon’s marital problems began two years earlier, when he experienced a mid-life crisis. Disgusted with his yuppie lifestyle, Mike purchased a diner in lower Manhattan; but, Catherine refused to sacrifice her elegant lifestyle, however, and moved in with her wealthy mother, Lillian. Now Catherine dates a smarmy stock broker, Tony Boer. They plan to wed, but Tony is uncomfortable with Ethan and Hallie.

For Hallie, the solution to this dilemma is obvious. She must visit the “real” Santa at Macy’s and request that her parents re-marry. Meanwhile, Ethan is preoccupied with his first teenage crush, a fourteen-year-old named Stephanie. Knowing that Santa isn’t real and also wanting to bring his parents back together, Ethan enlists Stephanie to help make Hallie’s Christmas wish come true by concocting a well-meaning but mischievous scheme involving mice, telephone calls and an ice cream truck.

The wholesome pro-family message in ALL I WANT FOR CHRISTMAS will appeal to all generations. Youngsters will identify with the antics of Hallie, Ethan and Stephanie, while adults will appreciate the domestic problems faced by Catherine, Michael and Tony. For senior viewers, Lillian is a charmingly supportive grandmother.

Robbie Baehr, when asked what he liked best about ALL I WANT FOR CHRISTMAS, said “I liked it all.” He usually finds long stretches of movies boring, but this time he said, “Daddy, this is a good movie. It’s like real life.”

With surprises at every turn, including a MIRACLE ON 34TH STREET ending, ALL I WANT FOR CHRISTMAS unfolds with virtually flawless directing, editing, and acting performances. Regrettably, it does contain three exclamations which could be interpreted as borderline profanity. Also, in one scene, Ethan is startled by an abstract nude painting at a museum.

Watch ALL I WANT FOR CHRISTMAS: