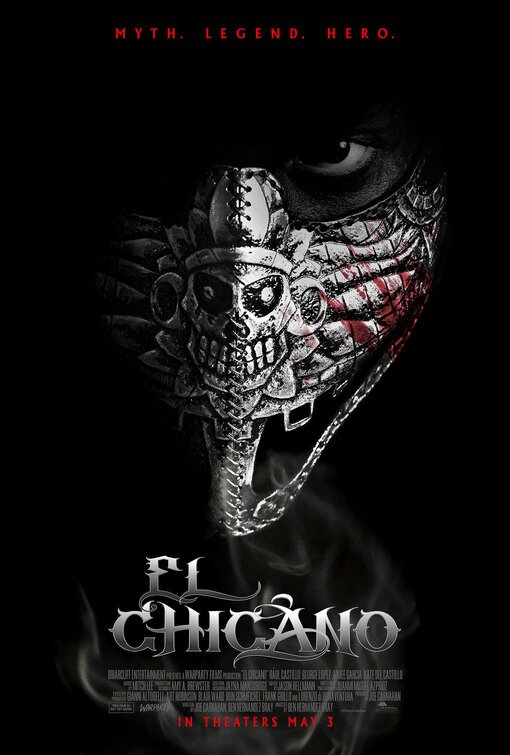 EL CHICANO is about twin brothers Diego and Pedro Hernandez, who grow up in a high crime area in East Los Angeles. Twenty years ago, the twins and a childhood buddy, Shotgun, witnessed the violent murder of Shotgun’s father. Pedro follows the way of the law and becomes a police officer, while Pedro carries out a life of crime until he reportedly commits suicide. Meanwhile, Shotgun becomes a violent drug lord. A high profile case leads Diego to discover his brother was murdered. He recreates himself into the masked street crime avenging legend, El Chicano, and sets out on a mission to make peace with his past and avenge his brother’s death.

Ultimately, there’s little distinction between the actions of the hero and the villain in EL CHICANO. As the masked hero, Diego goes on a violent killing spree, leaving a bloodbath all over East Los Angeles. The storyline drifts from uneventful to gruesome a few times. EL CHICANO has some positive Christian references; however, it’s marred by extreme violence, abundant foul language, and pagan, occult elements. So, MOVIEGUIDE® finds EL CHICANO unacceptable.

(PaPa, OO, CC, B, LLL, VVV, S, A, DD, MM):
Dominant Worldview and Other Worldview Content/Elements:
Somewhat mixed pagan worldview with occult references to conjuring up power from the evil dead through an Aztec knife with which they were killed, combined with overt Christian content, including Christian symbols such as several crosses and images of the mother of Jesus, the Bible is shown twice, family and friendship are extolled, prayer gives comfort to people, and people pray at funerals, at a grave and in their homes, but vengeance through violence and using occult means to defeat evil are primary themes
Foul Language:
More than 100 uses of the “f” word and several “a” and “s” words, plus a few profanities
Violence:
Some graphic and extreme violence and some strong violence includes shootings, stabbings, bludgeonings, explosions, gunfights, punching and kicking, and a disturbing scene of child abuse when mother repeatedly punches her child, plus one scene where a gunshot wound to the neck which causes blood to shoot out of a main character until he dies
Sex:
Some brief sex-related dialogue and a scene with affectionate kissing
Nudity:
None
Alcohol Use:
At least three party scenes with drinking
Smoking and/or Drug Use and Abuse:
Some party scenes with characters smoking and some drug Cartel dialogue, but drug use not shown; and,
Miscellaneous Immorality:
Strong miscellaneous immorality includes dysfunctional families and revenge is the motivation of the hero.

EL CHICANO is about a police detective who grew up in a high crime area in East Los Angeles and turns himself into the masked street crime avenging legend, El Chicano, to avenge his twin brother’s death at the hands of a notorious Mexican drug cartel.

The movie opens with a flashback of the twins and a childhood buddy, Shotgun. They all witness the gruesome murder of Shotgun’s father.

Flash forward 20 years, Diego follows the way of the law and becomes a police officer, while Pedro carries out a life of crime. Shotgun becomes a violent drug lord. Despite reports that Pedro committed suicide, the twins’ mother denies it and insists he was murdered. The young Detective Diego Hernandez was estranged from his brother for many years preceding his death. Diego works for the LAPD and takes on a high profile case of a mass murder against the Mexican Cartel, in the hopes of advancing his career.

When the case leads him to the revelation that his twin was murdered, Diego recreates himself into the masked street crime avenging legend, El Chicano. Diego sets out on a new mission to make peace with his past and avenge his brother’s death.

Diego arrives on the crime scene of a mass murder by the Mexican Cartel, with his new partner, Detective Martinez. Originally taking on the case for professional advancement, Diego quickly discovers the murder victims were directly tied to his brother, Pedro, who apparently changed his direction in life after his release from prison and before his death. As he sets out on a journey to uncover Pedro’s secret life, Diego connects the dots and soon realizes that Pedro was killed by the same organization who carried out the mass execution against their own people.

Then, the cartel murders Diego’s partner, Detective Martinez, in a high speed car chase after the detectives are caught spying on the drug lords. Unable to pursue justice by legal channels, Diego, takes on the identity of the legendary avenger, El Chicano. With the belief that he can take on the powers of the dead, Diego carries out more bloodbaths than the Mexican drug cartel.

While the storyline is confused and goes off in different directions at times, the real problem is the motivation, or lack thereof, of the characters. Both the hero and the villain lack motivation. The villain, Shotgun, supposedly kills his own men to make room for “Jaws,” a leader from a Mexican drug cartel family, who are also Mexican revolutionaries that want to expand the Mexican territory to the United States. Later, Shotgun kills Jaws because he doesn’t want him in his territory. It’s also difficult to believe that a good cop like Diego, who had little to do with his brother, is suddenly full of the rage, will and power to kill everyone in graphic and gruesome detail.

Add in the confused theology of the movie, and you have a complete mess. Both villains and heroes show Christian symbols and pray throughout the movie. However, when push comes to shove, the hero relies on the power of the “evil dead” conjured up in an ancient Aztec sword to win the battle. So, it’s not clear whether the characters or the writers know what they believe. Not only do the actions of the heroes veer from Christian values, such as treating others the way you want to be treated (Matthew 7:12), they border on occultism. There are some nice images and messages of the comfort of prayer, and the value of family and friendship. However, it’s not enough to distract from a rambling storyline that takes viewers from extreme violence to boredom and back several times. This, coupled with more than 100 “f” words and multiple profanities, as well as the occult content, make El Chicano unacceptable for most audiences.