"Never Too Old to Live Your Dream" 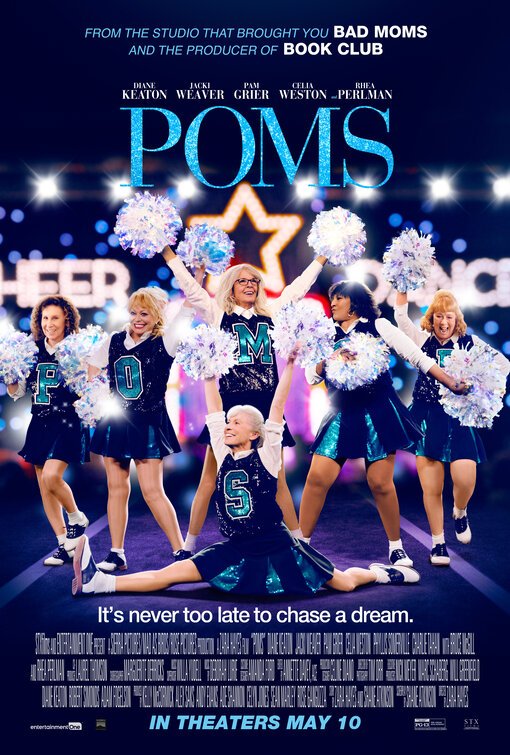 POMS is a comedy about Martha, a woman in New York with ovarian cancer who moves to Georgia and starts a cheerleading club in a retirement community. The women in the club accidentally book themselves to perform at a high school pep rally. They become a laughing stock and a viral sensation at the hands of Chloe, a high school cheer captain. Martha and her friends threaten to tell Chloe’s parents about a party Chloe threw at her house if she doesn’t help them with choreography and with entering a cheerleading competition in the “18+” category. There’s only one thing. The competition’s just three weeks away.

POMS has a clever storyline, laugh out loud moments (mostly age-related humor) and great performances, especially by Diane Keaton and Jacki Weaver. It has a moral worldview that extols friendship and not looking down on people because of their age. However, POM also has some light Non-Christian elements. Finally, it’s clouded by excess foul language, some sexual humor, a couple brief references to substance abuse, and other objectionable content. So, MOVIEGUIDE® advises extreme caution for POMS.

(BB, C, FR, Ro, LLL, V, SS, AA, DD, MM):
Dominant Worldview and Other Worldview Content/Elements:
Strong moral worldview with characters encouraging and looking out one another and promoting friendship and a sweet grandma/grandson relationship and not letting anyone pick on you because of your age, plus one character says the phrase, “Not today, Satan!” but another character says the Hindu word “namaste” while doing a yoga-type dance number, and light Romantic elements where character exclaims that they’re “cheering for themselves”
Foul Language:
23 obscenities, four strong profanities, 24 light profanities, an obscene gesture, some name-calling, and an implied vomiting
Violence:
Light violence includes a character thinks someone gets raped but it never happened, a TV commercial mentions embalming, and a character injures her foot while cheering and winds up in a wheelchair
Sex:
Strong sexual content includes a character implies that another character likes to have younger partners, an image of a cheerleader shaking her rear end, character comments about “getting laid,” mention of a hand job, character gestures towards breasts, character refers to a dance move as “sexual,” husband alludes to wanting to have sexual relations with his wife, teenage couple holds hands, character calls someone a “panty-chaser,” characters uses slang term for breasts, beginning of a sex-ed video shown in high school classroom, mention of cheerleading not being like pole dancing, references to sexual arousal, prophylactics are mentioned, and STDs are brought up twice
Nudity:
No explicit nudity but female characters wear swimsuits, sometimes female cleavage is visible, and women appear in sports bras, and there’s a quick mention of smoking a reefer cigarette, and a character takes medication for cancer; and,
Miscellaneous Immorality:
Strong miscellaneous immorality includes lying, disrespect to elders, characters play poker even though it’s not allowed, character goes to a funeral wake for free food, meanness, secrecy, character gets told to break a hip, and she responds saying “get pregnant,” characters call one another stupid a couple of times, characters threaten to blackmail a teenager if she doesn’t help them, character said she and her husband could either take tango lessons or get divorced, characters throw a brick on someone’s car windshield, and character jokes that she should’ve killed her husband years ago so she could cheerlead.

POMS is a comedy about a woman with ovarian cancer who moves from New York City to Georgia and starts a cheerleading club in a retirement community. POMS has several laugh out loud moments and extols friendship and looking out for other people, but it’s clouded by lots of foul language, sexual humor, light references to substance abuse, and other objectionable content.

POMS begins in New York City, where Martha (Diane Keaton) is having an estate sale. In the next scene, Martha packs up the remainder of her belongings and drives to Georgia, where she moves into a house in a retirement community called Sun Springs. Vicki, the community’s “know-it-all” spokesperson, shows Martha around and explains that there are plenty of activities and clubs for residents to do. If not, members can create one of their own. When asked why she moved, Martha responds “to die,” only she’s not kidding. Martha actually has ovarian cancer.

Martha’s next-door neighbor, Sheryl, introduces herself, but Martha’s reluctant to befriend her right away. Over time, Martha lets down her guard, and the two become close pals. One night while discussing their backgrounds, Martha opens up about how she was almost a cheerleader in high school, but never had the opportunity to perform because her mother got sick and needed care. Then, a lightbulb goes off in her mind. Why not start a cheer club of her own at Sun Springs?

Sheryl agrees to be one of the inaugural members of the club if Martha teaches her grandson, who lives with Sheryl, how to drive. Martha reluctantly agrees. The women hold auditions for the club and gain six recruits!

The squad encounters some opposition from one of the women’s son, who thinks it’s a ludicrous idea. Also, Vicki looks for any reason to cut the club and tie up their rehearsal space. Sheryl tries to help find a new location to rehearse but accidentally ends up booking them to perform at a high school pep rally, where they become a laughing stock and viral sensation at the hands of Chloe, one of the high school cheer captains.

Motivated to keep going, Martha and Sheryl go to Chloe’s house and threaten to tell her parents about a party she threw if she doesn’t help them with choreography and with entering a new cheer competition in the “18+” category. There’s only one thing. The competition is just three weeks away.

Will Chloe say yes? What will become of the squad? How will Martha’s health hold up?

POMS has a clever storyline and several laugh out loud moments, mainly pertaining to age-related humor. Keaton and Weaver deliver satisfactory performances with great comedic timing, and the movie as a whole is well-paced and has clear shots that don’t distract the viewer’s attention. POMS has a moral worldview where characters say sorry for some of their wrongdoing and show the value in true friendship and not looking down on people because they’re too old or young. Additionally, there’s one particular instance where Martha shows respect to her late mother’s memory.

On the other hand, POMS also has some light Romantic worldview with dialogue like, “the only thing that matters is what we think about ourselves.” and the characters are cheering for “themselves” rather than a team. In one scene, a character says “namaste,” drawing on a Hindu worldview. In another scene, characters comment on the fact that a wife’s husband won’t allow her to cheerlead because he’s worried “about the morality of it” and would liken her to a promiscuous woman (that’s putting it nicely). Finally, many scenes are clouded by excess foul language, sexual humor, a couple light references to substance abuse, and other objectionable content. So, MOVIEGUIDE® advises extreme caution for POMS.