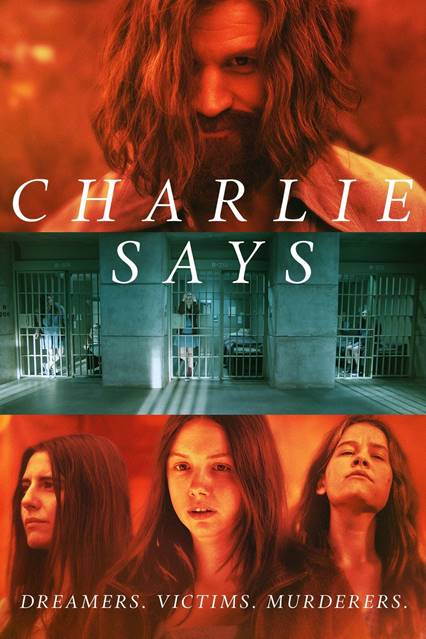 CHARLIE SAYS takes place near Hollywood in 1969, but far enough away to where a group of people can live and not be bothered. Here, Charlie Manson has a following of people who have abandoned their previous lives to pursue Charlie, the one person they believe has more truth and love. However, Manson has ulterior motives with his loyal followers. He begins to feed them a crazy story about a coming race war, prophesied by himself. Soon, his believers will have to prove their loyalty when he begins to assign them increasingly violent tasks.

CHARLIE SAYS is a haunting look into the lives of the female followers in the cult of Charlie Manson, but it contains a high, graphic amount of immoral, explicit content. The story is told from the point of view of a new recruit, who questions the methods of the leader, but ultimately is persuaded to do unthinkable things. The movie’s worldview is negative from beginning to end. Also, the amount of foul language, sexual content, nudity, and drug abuse is excessive. Ultimately, CHARLIE SAYS is more abhorrent than enlightening.

(RoRoRo, PCPCPC, FeFeFe, FRFRFR, HoHo, LLL, VVV, SSS, NNN, DDD, MMM):
Dominant Worldview and Other Worldview Content/Elements:
Very strong Romantic, politically correct, feminist worldview that sees the female murderers under the spell of cult leader Charlie Manson as victims of Manson’s sexist domination of women, with false religious worldviews throughout the movie, including Manson considers himself to be the product of a prophecy referred to in the book of Revelation in the Bible, his followers consider him to be equal in power and wisdom to Jesus and call him their father, Manson uses the Bible in false context to further his own agenda and control his followers, Manson doesn’t allow his followers to read any books except for the Bible, Manson doesn’t allow the women to carry any money, and they always eat second, plus strong homosexual elements as there are same sex sexual encounters, although the young women say that being a lesbian isn’t “the Lord’s way”
Foul Language:
At least, 40 obscenities and profanities include about 30 “f” words, one GD and two Jesus profanities separated by an obscenity, plus girl jokes about urinating in someone’s food
Violence:
Extremely high amount of violence and blood, childbirth scene with blood shown as well as another girl biting the umbilical cord in order to detach it, man slaps woman violently dragging her by her hair, brief scene where man throws knife at a girl standing in front of a door, the group practices stabbing people multiple times to prepare for “war,” the girls referred to killing people as “engaging in the dance of life and death,” scene where multiple people have been murdered with a moderate amount of blood, when the killers are shown they are drenched in the blood of their victims, man slices woman’s face with a knife, man covers another man’s head with a pillowcase and chokes him with a cord and then stabs him multiple times with a lot of blood, woman is stabbed multiple times with the scene focused on the girl who is doing it and has a good amount of blood spraying on her face as she does so
Sex:
Excessive sexual immorality such as young woman mentions that Manson “made love” to all the women under his control, young woman shown performing sexual acts on an older man, jokes about sexual acts, girl takes a younger man behind a dumpster and begins to perform oral sex on him, orgy scene with many sexual acts shown, man grabs a woman’s breasts, man performs oral sex on a woman and is stopped as Manson decides to make it a teaching moment and then explains to him how to give oral sex well, Manson takes one of the new girls and begins to seduce her and says, “try to imagine you’re making love to your daddy,” sex is shown as a form of freedom and rebellion against the world that people left behind them, a couple is shown post coital, girl describes in detail an intense orgasm she had, and some overt same-sex homosexual elements
Nudity:
An example of full frontal female nudity, an example of frontal and rear male nudity, multiple examples of upper female nudity shown during orgy scene, innumerable other scenes with upper female nudity, man strips girls of their tops while they are dancing and orders them to take them off for their performance the next day, and multiple examples of upper male nudity
Alcohol Use:
No alcohol use
Smoking and/or Drug Use and Abuse:
Smoking and extreme drug use includes characters occasionally smoke cigarettes, man mentions he “was high,” people put LSD or acid in everyone’s mouths, multiple examples of characters smoking marijuana and doing acid, a few scenes where people are snorting cocaine, and there is a mention of doing speed; and,
Miscellaneous Immorality:
Very strong miscellaneous immorality content, man says that he lied about being gay in order to escape going to war, strong elements of racism as Manson brainwashes everyone to believe they are preparing for a race war called Helter Skelter wherein black people will rise up and begin murdering them, they are preparing for this supposed war throughout the movie, elements of revenge, man makes threats to people, man brings a girl to a cliff’s edge and tells her to jump if she wants to leave him, multiple examples of stealing and robbing, bad role models, dysfunctional family portrayal, strong immoral behavior of a cult with many false religious elements.

CHARLIE SAYS focuses on the story of a young girl who’s accepted into the following of Charlie Manson in 1969, quickly becoming one of his followers and eventually committing murder for him. Although quite well done, this movie contains an exorbitant amount of immoral, graphic, questionable content. CHARLIE SAYS is more abhorrent than enlightening.

The movie begins when a young woman named Leslie Van Houten is welcomed to spend a few days with a group of people in a commune outside of Hollywood, at the Spawn Ranch on the northernmost side of the San Fernando Valley. She’s soon introduced to the leader of these people, Charlie Manson. He makes her feel special. He makes her feel beautiful. Most importantly, he makes her feel loved. Right away, a tab of LSD is placed on her tongue and she accompanies the group up a mountain where they have a service of types. Instruments are played and everyone sits in awe as Charlie speaks. He talks about denying the things of the world, living off the land and living their lives with pure love. He points out a woman’s scars and has everyone around her tell her how beautiful she is despite these things.

The next day, Leslie is invited to go scavenging with the girls in town to look for food. Before they leave, Charlie instructs her to give any cash she has to a man, because women aren’t allowed to have money. Later that night, she makes the decision to stay, and Charlie gives her a new name, Lulu. It doesn’t take long before she’s a believer of all the things Charlie says, and Charlie himself. She makes newcomers feel welcome and does as she’s told.

One member of the group who pops in when he can is a member of the famous band, the Beach Boys. Charlie plays and writes music as well, and this man tells him that he pitched one of his songs to the band. Soon, a big shot music producer comes out to hear Charlie play, and Charlie wants to make sure everything is perfect. Despite what Charlie says, the producer doesn’t seem to be impressed and gives him the runaround when Manson tries to contact him. He decides to go personally, but when he arrives to the house, there seems to be a party, and they say that the producer isn’t there.

Furious, Charlie returns, beginning to devise a plan. He begins teaching his followers that there will be an uprising of black people starting a race war against white people, called “Helter Skelter,” a reference to a minor silly song performed by the Beatles. Charlie has everyone practice using knives and stabbing imaginary black people to prepare for this supposed war. Soon, he instructs a few of his followers to go to that house and kill everyone in it.

Throughout this story, there are scenes that flash forward to when Lulu and two other Manson girls have been convicted of murder and are sitting in high security cells. They still cling to the teachings of Charlie and believe that one day they will live underground, yet emerge years later with wings like butterflies. A woman working at the prison takes time to talk to them regularly. She does crafts with them and tries to make them see the truth about the chaotic rubbish that Charlie filled their heads with for more than a year, and other women for even longer.

This story is nothing short of haunting, showing a glimpse into the world of the women who were completely brainwashed by Charlie Manson into believing that whatever he said was true. Written by a woman who belonged to a cult when she was a child, CHARLIE SAYS is very well done, with compelling characters that can create empathy within the audience with ease. If the purpose was to make the viewer feel disturbed and frustrated, the filmmakers have succeeded. Listening to the girls’ wholehearted belief in Charlie Manson is heartbreaking, especially as their world slowly begins to shatter.

However, the questionable immoral content in CHARLIE SAYS is absolutely excessive. The movie has a very strong Romantic, politically correct, feminist worldview that often blames Charlie Manson’s sexist philosophies for brainwashing the women under his control to commit murder for him. For example, Manson refuses to let the women under his control carry money, and they always eat last.

CHARLIE SAYS is also dominated by false religion. Manson teaches freedom of expression and love, as well as parts of the Bible, yet compares himself to Jesus and believes that a prophecy in Revelation is referring to him. Manson also preaches free love, so there’s an extremely high amount of sexual content and nudity that’s almost completely unnecessary to properly tell this story. The violence and foul language is also extreme, with many bloody scenes and almost 30 “f” words.

Ultimately, CHARLIE SAYS is more abhorrent than enlightening. Despite its chilling portrayal of Charlie Manson and his hypnotic hold on his followers, susceptible viewers might end up copying some of the evils they see in CHARLIE SAYS.