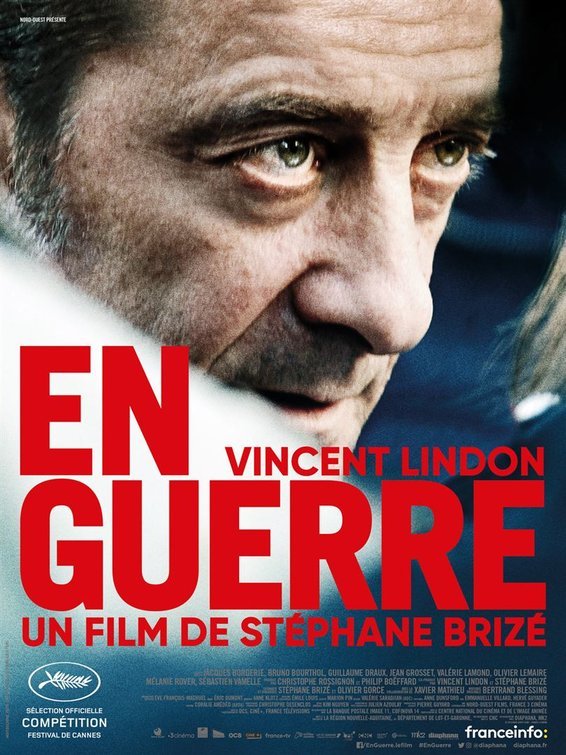 AT WAR is a French drama. It follows a strident auto workers protest led by a passionate union leader. The workers agreed to work longer hours without additional pay or bonuses to make the factory sustainable while the company agreed to keep the plant open for five years. However, the company breaks this agreement two years into it, and now the workers are furious. Because they don’t have any other options for a job in their town, their only choice is to fight the plant closure.

AT WAR is told like many “slice of life” French movies, seeming almost like a documentary following real people rather than a scripted film. However, the movie is rather dialogue heavy, and it’s easy to get lost in the many extensive arguments. It does bring a raw truth to the plight of the workers and their families. Despite that, the movie has a superficial, stereotypical humanist, anti-capitalist, socialist worldview of the story’s political conflict. As such, it promotes a left-wing view of “class warfare.” AT WAR also contains lots of foul language and some disturbing violence.

(HHH, AcapAcapAcap, SoSoSo, CoCo, B, LLL, VV, A, MM):
Dominant Worldview and Other Worldview Content/Elements:
Very strong humanist, anti-capitalist, socialist worldview promoting class warfare in movie that quotes Marxist, socialist playwright Bertolt Brecht where workers protest and fight a greedy, recalcitrant auto manufacturer that breaks an agreement and tries to divide the workers while totally rejecting a possible positive solution to resolve a major conflict, and movie depicts them as only caring about their profits, movie castigates government for doing nothing to help the workers other than lending verbal support, and some moral elements (the movie is right that a company should honor its commitments to its workers, and, if it does have to break a past agreement or contract, it should offer some compensation for breaking that agreement or contract, or not make such an agreement in the first place);
Foul Language:
At least, 49 obscenities (including at least seven “f” words) plus a person sends feces via mail as an act of protest, a man makes a joke about going to the bathroom, a man’s house is graffitied including a crass name on the wall, one example of a man insulting a woman in a very inappropriate way, and protestors yell at the company CEO in unison to “show us your bum”;
Violence:
Moderate amount of violence (some of it disturbing) with many scenes involving protests where people are shoving/pushing/kicking officers, the mob flips a car over that has people inside of it, and when a man emerges from the car he has some blood on his head, and a man pours gasoline over himself and sets himself on fire, but the disturbing scene cuts almost immediately after he lights it;
Sex:
No sexual content;
Nudity:
No nudity;
Alcohol Use:
People are shown a few times having celebratory drinks in a bar, but no apparent drunkenness;
Smoking and/or Drug Use and Abuse:
No smoking or drug use;
Miscellaneous Immorality:
Strong miscellaneous immorality icnldues strong elements of greed throughout as the company bosses stereotypically are shown to only care about money and their shareholders, the company bosses hardly budge in their negotiations and refuse a possible solution offered by their workers, examples of bad marriages as the main character is divorced, and another woman tells the story of her husband with whom she has a bad relationship, and some elements of lying, deception and anger.

The French labor drama AT WAR is made under the overarching axiom from Marxist, socialist playwright Bertolt Brecht: “Whoever fights can lose. Whoever doesn’t fight, has already lost.” This statement is true for Laurent, a French labor representative who’s fighting with everything he has and with nothing to lose. Two years prior, the German auto company where Laurent and 1,100 other people work, Perrin Industries, made an agreement for the next five years with their employees. The workers agreed to take on extra hours for no additional pay, as well as without any bonus payments. They were told that this sacrifice by them would sustain the company and guarantee them jobs for the next five years. However, two years into this agreement, Perrin Industries officials announce they’re closing down the company’s factory in Agen, France. The workers in this factory calculate, however, that they’ve saved the company more than five million euros by putting in these free extra hours, and now they want what was promised to them.

The workers begin to strike. They bolt the factory’s gate while they protest outside of the factory for justice. Laurent and other representatives for the workers union meet with leaders of the corporation, but they want to speak directly to the CEO. The government has been no help to them at all, because a court has ruled in agreement with Perrin to shut down the factory. The protest continues, with people demanding to speak to the CEO, but they get nowhere because the CEO’s assistants refuse to let them. The company has offered the workers severance pay, but Laurent and other workers believe that a severance package hardly guarantees anything, and the workers want more stability than one paycheck. However, as the weeks pass, the company raises their severance offer by thousands of dollars, and some of the workers begin to sway. They are starting to become divided instead of presenting a united front. Some of the workers want to accept the severance pay and return to work for the time that the factory will remain open. This creates more tension between the protesters, company and those who have decided to digress.

Finally, the CEO agrees to meet with the union representatives, something the reps have been fighting toward for months. Laurent also is able to announce to the factory workers that they have a potential buyer for the factory, which would guarantee everyone jobs again, for a different company. However, the negotiations at the grand meeting don’t go as well as hoped. The CEO refuses to sell to this other buyer, refuses to keep the factory open and refuses severance packages to the more radical protesters.

Laurent is at a loss. He has fought with passion, risking martyrdom. He has one final move, but will he make it?

AT WAR follows the common form of French cinema in a “slice of life” story, telling the story of many characters fighting toward a goal. This, of course, fits the movie’s socialist, anti-capitalist view of class warfare, the workers against the business “owners.” Although not a directly true story, it does reflect the attitude of many left-leaning activists and trade union leaders in France and other parts of Europe. While entertaining, the movie is sometimes rather dialogue heavy. As a result, a viewer who doesn’t speak French could easily get lost in all the movie’s many argumentative scenes. Actor Vincent Lindon plays Laurent. He spearheads this story, easily portraying a man with great passion who’s fighting for something he believes.

As hinted above, AT WAR has a strong humanist, anti-capitalist, socialist worldview that promotes the left-wing view of “class warfare.” The capitalist business owners are viewed in a stereotypical way. They’re totally greedy and recalcitrant, even when the workers offer a possible positive solution to resolve the conflict with the company. That said, the movie is right when it contends that a company should honor any agreement or contract it makes with its workers. If, in the end, the agreement or contract does have to be broken for some good reason, a company should offer some kind of reasonable compensation to the workers for breaking it. AT WAR also contains lots of foul or crude language and some disturbing violence. Ultimately, the combination of this content and the movie’s stereotypical anti-capitalist, socialist worldview are totally unacceptable. There are, of course, evil capitalists just as there are evil workers, but AT WAR’s socialist worldview is itself a belief system that lacks redeeming qualities. Also, as a socioeconomic system, socialism historically doesn’t work.