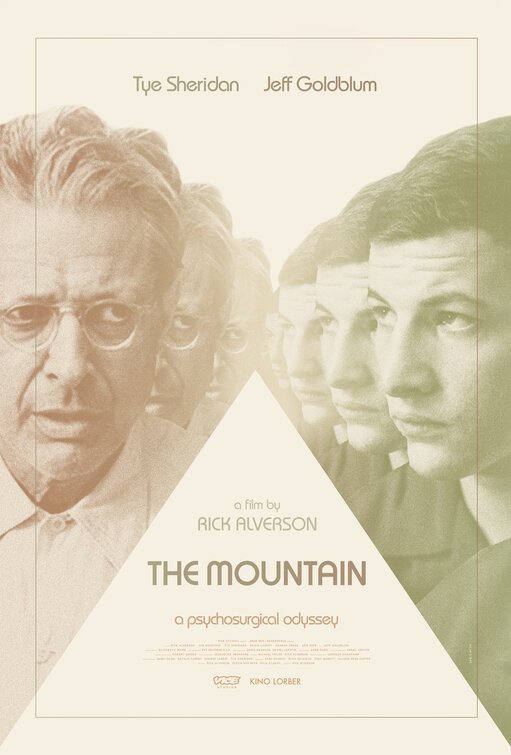 THE MOUNTAIN, set in the Pacific Northwest in 1954, opens on young Andy wanting a better relationship with his distant father. Andy’s father dies at the ice rink where Andy works. So, Andy partners with Dr. Wallace Fiennes, who wants Andy to take photos of his lobotomized patients. Grappling with the moral consequences of these procedures, Andy meets Susan, a mentally ill patient. Together, they form a bond despite the mental decline of Dr. Fiennes as well as Susan’s own mentally ill father.

Tye Sheriden and Jeff Goldblum deliver superb performances in THE MOUNTAIN. The use of color in the mental asylums give viewers a glimpse into what it was like to be mentally ill in 1954. The movie is like a morality tale about narcissism, pride and ego. It also exposes the negative consequences of past controversial mental health therapies. Despite this, THE MOUNTAIN has a high level of sexual content, plus excessive nudity, scenes of using a manmade Ouija board, and some disturbing violence and foul language. Viewers will be turned off by all the edgy, objectionable content in THE MOUNTAIN.

(BB, Ab, FRFR, OO, PaPa, LL, VV, SSS, NNN, AAA, D, M):
Dominant Worldview and Other Worldview Content/Elements:
Strong moral worldview that’s like a morality tale on a doctor’s narcissism, pride, and ego, which also elicits sympathy for the doctor’s victims while exposing the negative consequences of controversial mental health therapies in 1950s America, marred by some immoral behavior and objectionable content, plus elements of false religion as main character uses a homemade Ouija board to contact his dead mother, and a mentally ill man makes references to Eastern, New Age beliefs in what are called “Ascended Masters” and preaches a bizarre form of Buddhist, New Age reincarnation and “enlightenment” (the journey of the two main characters takes them to a growing center of the New Age Movement, which started its heyday in the 1960s);
Foul Language:
10 obscenities and four strong profanities;
Violence:
Moderate level of violence includes two scenes of a woman receiving shock therapy, a scene of blood as a woman dies while having a lobotomy, and one scene of two mentally ill patients thrashing around and being restrained by hospital security;
Sex:
Extreme sexual content includes a man looks at pornographic images and sees a picture of an hermaphrodite, five scenes of depicted fornication, one scene of implied fornication, one scene of a man watching two people making out, a scene with oral sex, and two people kiss;
Nudity:
A man looking at pornographic images sees a picture of a including a picture of a hermaphrodite with both male and female genitalia, upper female nudity when a woman gets dressed, one scene with a teenager in his underwear, and nude images on a wall;
Alcohol Use:
Alcohol use and several scenes of drunkenness include a father with a drinking problem;
Smoking and/or Drug Use and Abuse:
Scenes with people smoking cigarettes;
Miscellaneous Immorality:
Very strong miscellaneous immorality includes lying, deceit, boy gambles with owner of ice rink in card games, white patients are treated better than black patients, man steals a photo he has taken of one of the patients, envy, revenge, doctor convinces assistant that lobotomies are the best treatment for the mentally ill but doctor is mentally ill himself, character’s father is controlling and distant, but son wants his father’s love and approval, and doctor only cares about himself and not his patients.

THE MOUNTAIN is a strange and edgy but interesting drama set in 1954 in the Pacific Northwest of the United States. A young man named Andy, who works as a Zamboni driver for an ice rink, grapples with the institutionalization of his mother. Despite Andy’s pleas to see his mother, his father refuses to let him see her. Andy tries to connect with his father, but he’s drunk most of the time, and, when he isn’t, he dismisses Andy or makes disparaging comments. When Andy’s father dies at the ice rink, Andy must make a life for his own, until a doctor, Wallace Fiennes (played by Jeff Goldblum), comes to find Andy and asks him to help him take photos at his hospital.

Andy quickly learns that Dr. Fiennes (or Wally, as Andy is asked to call him) is a lobotomist who performs shock wave therapy on mentally ill men and women and then performs lobotomies for medical research. Andy understands Wally has performed a lobotomy on his institutionalized mother.

As Andy and Wally travel to perform lobotomies, it’s hard to distinguish who is the doctor and who is the patient as Wally’s life and career begin to unravel. Because of the trauma of his parents, Andy’s mental state also declines, making him identify with (and ultimately relate to) the mentally ill patients on which Wally is performing his lobotomies. Andy eventually becomes a patient himself, starting to hear the voice of his mother coming through a homemade Ouija board. At one asylum, Andy meets Susan, a patient with whom Andy falls in love. As he watches Wally perform a lobotomy on Susan, Andy begins to resent Wally’s controversial measures to heal the insane.

The cinematography in THE MOUNTAIN can’t be beat. Many scenes are of picturesque mountains and windy roads, displaying the beauty of the places Andy and Wally visit. This, along with its accurate depiction of 1950s America, where scenes (especially of the hospital) are shot in muted tones like grey and white. What’s even more breathtaking is Director Rick Alverson’s ability to tell a story with little or no dialogue. The first half hour of the movie features no words or voices, yet packs a powerful punch as the movie encourages viewers to empathize with Andy’s plight of having a mentally ill mother and a cold and distant father. The scene of the father’s death is especially chilling. Alverson’s ability to depict the scene with no blood or gore while just employing the simple use of facial expression and camera shots helps viewers understand fully the life-changing moment that the father’s death will be for Andy.

Although not much religion is specifically mentioned, Andy uses a Ouija board to communicate with his mother. Also, at the end of the movie, Susan’s father engages in a rant about “Ascended Masters.” According to Eastern and New Age teachings, Ascended Masters are spiritually enlightened beings, once human, but now having gone through a series of initiations, are now spiritually transformed. This leads the audience to understand Jack believes people who have gone through lobotomies have gone through the sixth and final initiation, meaning they are now “enlightened.”

Director Rick Alverson is a brilliant filmmaker. His attention to detail in terms of wardrobe and props places viewers right in the place and period in which the movie is set. In addition, his use of color in the mental asylums gives viewers a glimpse into what it was like to be mentally ill in 1954. Also, he elicits superb performances by Tye Sheriden and Jeff Goldblum. That’s where the positive elements end, however. The average moviegoer will find THE MOUNTAIN a little slow and sometimes puzzling.

Even so, THE MOUNTAIN exposes the negative consequences of controversial mental health therapies in 1950s America. As such, it explores the consequences of using shock therapies and lobotomies to cure mental health patients in a time when those procedures were quickly giving way to the use of medication and other therapies. The movie is also a kind of morality tale about narcissism, pride and ego. Dr. Fiennes firmly believes in his methods, but he only cares about himself, not his patients. Ultimately, the movie’s take on narcissism, pride and ego will leave discerning viewers not only grappling with the moral implications of his methods, but also leave them deeply saddened for the patients who endured such treatment, as well as for Andy, a sexually confused young man who’s been abandoned both by his institutionalized mother and his father’s tragic death.

Despite these positive qualities, THE MOUNTAIN has an extreme amount of sexual content, with several scenes of depicted fornication, dreams of hermaphrodites and explicit nudity. THE MOUNTAIN also has some foul language, disturbing violence, alcohol abuse, and a fair amount of miscellaneous immorality such as lying, envy and revenge. Even if they like parts of THE MOUNTAIN, viewers will be turned off by all this edgy, objectionable content.

Director: Director Rick Alverson is a brilliant filmmaker. His attention to detail in terms of wardrobe, props places viewers right in the place, period in which the movie is set. In addition, his use of color in the mental asylums gives viewers a glimpse into what it was like to be mentally ill in 1954. Also, he elicits superb performances by Tye Sheriden, Jeff Goldblum. That’s where the positive elements end, however. The average moviegoer will find THE MOUNTAIN a little slow, sometimes puzzling.