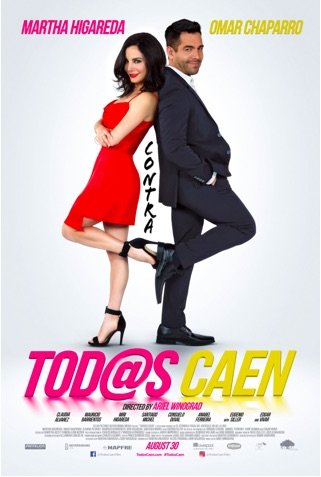 TOD@S CAEN is a Mexican romantic comedy. It follows Mia and Adan, two people who believe they know how to manipulate the opposite sex and want to help others do the same. Mia works for a TV studio and has been working to create a show for women. However, the show can only be greenlit if she secures the affections of Adan. They both realize they each know how to play dating games, so they try to outdo the other. However, as they spend more time together, the games begin to turn into real emotions. How can Mia tell Adan she’s using him to get ahead?

TOD@S CAEN tells a predictable, familiar story. Because of the similarities with movies before it, the movie seems to drag. There are some funny parts that help keep the viewer’s interest, but the story isn’t very original. There’s also an extremely high amount of questionable content, including a lot of language, sexual innuendos and content. Also, the characters look to their own hearts for guidance and nothing else. TOD@S CAEN is excessive and unacceptable.

(RoRoRo, Fe, LLL, V, SS, NN, A, MM):
Dominant Worldview and Other Worldview Content/Elements:
Strong Romantic worldview that shows the underlying message of following your heart and doing what feels right, although it begins with the main characters portraying themselves as tough and selfish knowing what to do to get their way, they eventually have their hearts broken, but the lesson they learn is to open their hearts to love again, not much morality for the characters to follow and no mention of God or looking to Him for guidance or comfort, plus minor feminist elements to teach women they don’t need validation from men, but she goes to a negative extreme
Foul Language:
At least, 56 obscenities and eight profanities, plus an obscene gesture, man is informed his genitals are showing, older man passes gas, two people are shown vomiting on one another
Violence:
A man falls from a window injuring himself, one scene during a women’s wrestling match showing some mild violence including a man being beaten by the women incurring some facial bruises, different men are slapped in the face multiple times
Sex:
Strong sexual content includes many comments suggesting sexual acts or fornication, implied fornication as a man says goodbye to a woman “the morning after,” a man and woman seem to be moving toward intercourse until he falls asleep in his underwear, comments about men only wanting to have sex, woman has other woman chant “I want men to screw me with their eyes” during a cycling exercise class, main couple is shown kissing and moving toward intercourse on multiple occasions although nothing else is shown, a few examples of genitalia being drawn onto someone else’s face, a woman’s ex kisses her while she is in a relationship, but she denies him, architects design a building that is shown to have a resemblance to male genitals, countless crude jokes with many comments about different women’s breasts, a joke about menstruation, a man makes a joke about a porn star
Nudity:
Partial sexual nudity includes men shown in underwear multiple times in sexual situations and once when a man sends photos of himself to his girlfriend, woman shown in bra multiple times sexually and while changing clothes, upper male shown while wrestling, women wrestlers are wearing revealing outfits, rear nudity as a man is tricked into removing his clothes, woman emerges from a bedroom wearing only a T-shirt and underwear
Alcohol Use:
Characters are shown throughout the movie taking shots of tequila, drinking wine, a few scenes in a bar/club with everyone drinking, woman drinks straight from tequila bottle while working, no apparent drunkenness but consistent alcohol consumption
Smoking and/or Drug Use and Abuse:
No smoking or drug use; and,
Miscellaneous Immorality:
Strong miscellaneous immorality includes many examples of dysfunctional marriages and families, negative examples of relationships, both main characters give awful dating and relationship advice to the men and women in the audience, a woman has left her husband and son for another man, couples are shown on a reality show having been unfaithful, elements of revenge as a woman sets out to break a man’s heart after he broke the heart of her daughter, and examples of moral relativism throughout as the characters justify their immoral action