THE DAY SHALL COME 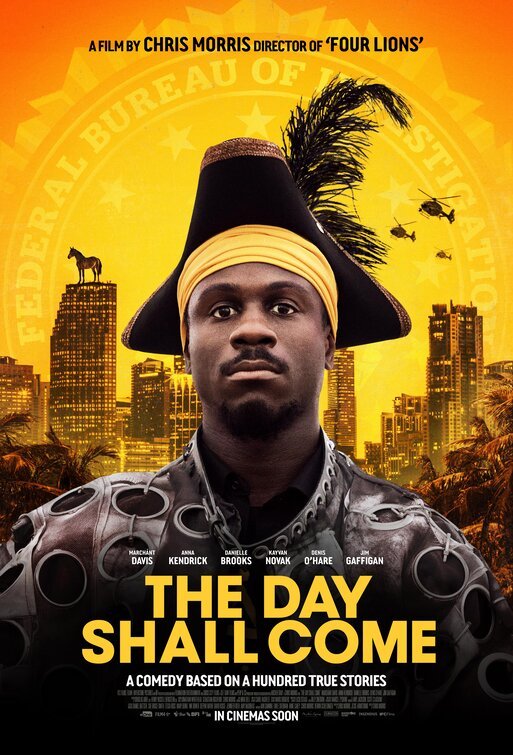 THE DAY SHALL COME follows Moses Al Shabaz as he scouts Miami recruiting for his Black Jihadist army. He preaches in the name of many, including Black Santa, Black Jesus and Muhammed, and disapproves of guns until the time comes for white people to be overthrown. An FBI anti-terrorist team nearby finds a video of Moses preaching these extreme words to his army of four. However, their methods aren’t lawful. They go to extreme measures to coerce Moses into different illegal acts, when all Moses is after is a little bit of money to help his farm survive.

THE DAY SHALL COME does nothing to help the race issue. The story takes an extremist view, with radicals on both sides, including white and black supremacists. The agents who work for the FBI only care about convicting minorities, and they get those convictions through coercion and manipulation. The attempt to turn this movie into a comedy was a terrible move. Most of the comedy falls flat. THE DAY SHALL COME has an abhorrent Romantic, politically correct worldview and lots of bizarre theology.

(RoRoRo, PCPCPC, APAPAP, FRFRFR, LLL, V, S, N, A, DD, MMM):
Dominant Worldview and Other Worldview Content/Elements:
Very strong Romantic, politically correct worldview depicting the FBI as a racist institution out to frame minorities and depicted America as a racist country absolutely controlled by evil, racist white people, with very strong false religion elements throughout as the main characters follow a religion with a “star of six” where they preach support for a “Black Jihad,” believing that “God” will empower them to overpower the white race, a man believes that God will grant him supernatural powers which can also be attributed to the leader’s schizophrenia, the leader and his followers pray in the names of six gods, some of which include Muhammed, Black Santa and Black Jesus, they are also training physically and spiritually for the day where they have enough of an army to overthrow the white race by God’s will (dinosaurs also figure somehow in this wacky plan)
Foul Language:
At least 89 obscenities (about a third are “f” words), 12 profanities, some racial slurs, multiple comments regarding male genitals, men are shown urinating into a container
Violence:
One instance where a man is shot in the head with a toy crossbow penetrating with minor blood, and a man violently grabs another man’s crotch and threatens him
Sex:
References to oral sex, and the FBI teams up with a man they know to be a pedophile, but they don’t do anything about him because of his assistance
Nudity:
A few pool party scenes includes upper male nudity while swimming and girls in bikinis
Alcohol Use:
People are shown having alcoholic drinks at a pool party a few times, a man comments that something was said when he was drunk, but no shown drunkenness
Smoking and/or Drug Use and Abuse:
Some cigarette smoking, smoking marijuana, a young man tries to buy some Ecstasy, and a man needs prescription medicine for mental health;
Miscellaneous Immorality:
Themes of racism throughout the movie in the message of the story and the characters, the main characters are training to see the day when the white race will be overthrown, FBI agents pose as white supremacists, strong elements of government and law corruption as the agencies are coercing minorities to commit crimes so they can charge them falsely, the FBI teams up with a man who they know is a pedophile and refrains from charging him because of his assistance.

THE DAY SHALL COME follows Moses Al Shabaz, a self-proclaimed preacher who scouts the streets of Miami looking for army recruits. His small group of believers consists of four people, plus his wife and daughter. They believe in the “Star of Six,” which consists of characters such as Black Santa and Muhammed, and trust that at the sound of a horn will summon dinosaurs to come to their aide. He believes in a nonviolent life, throwing away any guns they find, and teaches others that God will supply the right kind of bullets when the time comes.

Moses lives an impoverished life, barely scraping by and trying to pay his landlord with items from their farm. He’s happy however, especially with his daughter and wife beside him. Also, his wife always reminds him to take his medicine so that he won’t believe he can communicate with animals.

On the other side of town in Miami, the FBI is making moves on a young Muslim man. They have someone working undercover to try to convince this man that it’s God’s will to blow up a pool party. Even though the Muslim man is reluctant to do it, he’s convinced to press the final button, causing him to immediately be arrested and charged as a terrorist. The FBI celebrates its entrapment0. victory, and they move on to their next case.

Meanwhile, a young female agent named Kendra has seen a few videos of Moses online where he proclaims that their goal is to destroy the government, and she proposes him as their next target. They send in their informant, who also happens to be an excused pedophile, and he tells Moses that he has an uncle who is interested in investing in their regime. Moses is on the verge of eviction, so he takes a meeting with the Islamic State, which is actually just a few undercover FBI informants. They tell him that they want to give him weapons, but he declines, telling them he and his group don’t believe in guns.

However, after the meeting ends, he’s told that the Islamic State will only give them money if he accepts their weapons. He immediately accepts, and the FBI believe that they’ve got him now. However, after talking with his wife, he comes to realize this isn’t what he believes and cancels the partnership.

Even so, he’s still out on his rent and about to be evicted. His landlord tells Moses he needs some radioactive material, and if he can get that, then his home will be safe. He calls the man who he believes to be in the Islamic State and makes a very bad move right in front of the FBI. Soon, he has several canisters that are promised to be filled with uranium the next day, but his army isn’t fully on board. It just so happens that the people who want this are Neo-Nazi white supremacists and are willing to pay $100,000 for it. Moses and his crew decide to fill the canisters with urine and beans and head back to sell it. However, little do they know that this Neo-Nazi gang is actually all part of the FBI trying to catch them in the act.

Agent Kendra finally gets through to her boss in time to call off the raid, saving Moses and his friends. However, just when they think they’re in the clear, there’s still another plan from the government to pin a terrorist act on him, and Moses and his friends are left completely helpless.

THE DAY SHALL COME is a political statement about the alleged coercion of minorities to perpetrate and then confess to crimes that they originally had no intent to commit. Although such injustice sometimes may occur in the United States, this movie tells the story in a way that feels more like a call for black supremacy rather than equality. The main character is waiting and preparing for a day where the white race is “overthrown.” He preaches this message to his few followers with great passion. Although it seems harmless in the little impact he has on his direct community, the impact of putting it in a movie is much greater. Besides this, the filmmakers add so much humor into their movie that most of it falls flat, with many of the jokes and punchlines feeling witless and at times pointless. That said, as a breakout role for lead actor Marchánt Davis, he is arguably the best part of THE DAY SHALL COME, portraying his character with truth and conviction.

THE DAY SHALL COME has a very strong Romantic, politically correct worldview. America is seen as a thoroughly racist country controlled by evil white people. Also, the FBI is depicted as a corrupt institution out to frame minorities, including Muslims, for crimes they didn’t commit. Also, the lead character, who has to take drugs to control his schizophrenia, preaches a bizarre false religion where they preach support for a “Black Jihad,” believing that “God” will empower them to overpower the white race. They also pray to a “star of six,” which includes Muhammed, Black Santa and Black Jesus, that will help them overcome the white people. Finally, they train physically and spiritually for the day where they have enough of an army to overthrow the white race by God’s will.

THE DAY SHALL COME has a high amount foul language, some racial slurs and many inappropriate comments. In addition, the corrupt FBI agents team up with a man they know to be a pedophile, but they don’t do anything about him because of his assistance. The violence, drug and alcohol use is minor, but the movie’s crazy worldview is abhorrent.