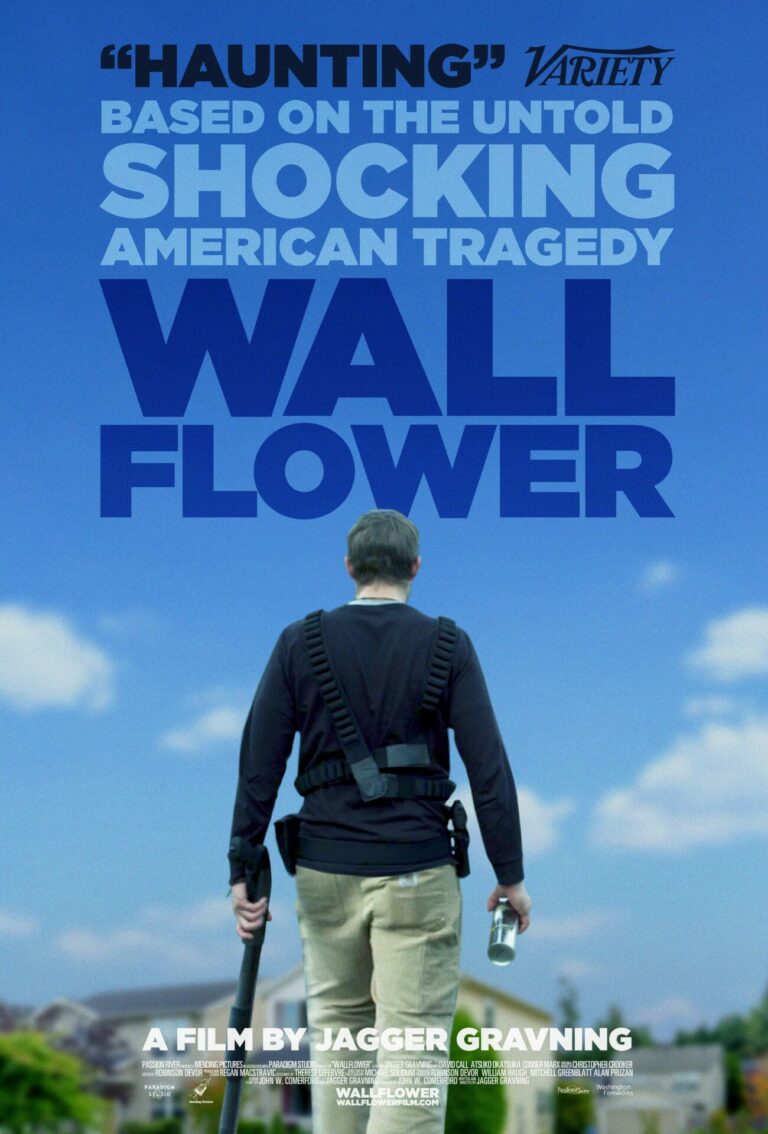 WALLFLOWER tells the story of the Capitol Hill massacre in 2006 in Seattle, where six people were murdered at a party. One night, some friends attend an electronic dance music rave, partying, drinking and taking drugs. Kyle Huff is there too, hanging out watching the others. He’s invited to an after party and visits there, but doesn’t really feel like he totally fits in with the gang. Later, he returns with a gun and plenty of ammo, murdering those in the house, and then himself when confronted by police.

WALLFLOWER tells this tragic story through a series of flashbacks and forwards taking place within the same 24 hours. There’s little to no background to any of the characters, including the murderer, whose only motivation is a recent breakup and hatred for hippies. Consequently, the movie creates overwhelming apathy for almost all the characters, and, when they are murdered, it’s pretty unemotional. WALLFLOWER has a strong humanist worldview. People expressing skepticism about God’s existence and think that the here and now is what matters. WALLFLOWER also contains lots of foul language and substance abuse.

(HHH, AbAb, PaPa, FRFR, HoHo, LLL, VV, S, N, AA, DDD, MM):
Dominant Worldview and Other Worldview Content/Elements:
Very strong humanist worldview throughout movie about a real-life mass shooter and his victims where no one looks to God for purpose, and most seem to believe that the “here and now” and pleasure are the only things that matters, human beings are the judge and only the present material world exists, and there is some conversation about God and how the idea of God creating himself doesn’t make any sense to the people in the movie, and strong pagan elements include some false New Age experiences about the universe while partaking drugs, plus a primary subplot is that the main female character is dealing with a breakup in her lesbian relationship with another woman
Foul Language:
At least 71 obscenities (including many “f” words), two profanities, several obscene gestures, and some perverse name calling
Violence:
One major massacre scene where a man shoots many people in a house, killing many, but nothing really graphic or extremely bloody is shown
Sex:
Some inappropriate sexual comments are made throughout the movie, one of the main female characters is dealing with a break up in her lesbian relationship with another woman, and a group of people discusses if they would switch genders from birth if they had the chance and why
Nudity:
Rave scene where some girls are shown scantily clad, a man takes off his shirt in excitement, and a drawing of female breasts is shown a few times
Alcohol Use:
Alcohol use throughout, people are shown drinking from flasks and directly from full bottles, a character says they’re drunk, and one girl is shown to be underage and consuming alcohol
Smoking and/or Drug Use and Abuse:
Multiple scenes of people smoking cigarettes, and heavy drug use includes marijuana use, a girl says she’s “rolling” on MDMA or Ecstasy, people are shown taking pills at a rave, a girl smokes through a bottle and passes out for a minute, people are shown doing cocaine, a bowl of psychedelic mushrooms are sitting on a table, and a man takes one;
Miscellaneous Immorality:
A man tries to take a passed out young woman into his car, but other people stop him, many people blame their issues on their parents, a character’s friend killed his parents and then himself, and a young woman talks about how her artwork is too perverse to show to anyone.

WALLFLOWER tells the story of the Capitol Hill massacre, where a man murdered six people in Seattle during an after-hours house party. There was a huge rave one night in March 2006, with teenagers and young adults coming together to dance to electronic music, drink and do drugs. Kyle Huff attends the rave, but, unlike most of the people, he comes alone. He mostly seems to stand around watching the party happen.

A group of friends are having a great time together. One teenager sees Kyle and reaches out to him, saying that he looks lonely. Another guy sees him and extends an invitation to the after party that he’s having at his house. Kyle seems to be struggling with a recent breakup. He also has written a letter expressing how much he hates hippies and that the time is now to end things.

Kyle appears to be quite the loner but shows up at the after party anyway. He lurks, listening to other people’s conversations and occasionally contributes his own thoughts. He sees a young female, who looks like she could be underage, and offers to give her a ride home after he sees a guy trying to get her drunk.

However, Kyle’s demeanor has made everyone else around him feel strange, as he quietly hangs around. There is a young woman in the house who was rude to him at the rave. She apologizes for that, but then later is very rude to him again. She’s going through a breakup with her girlfriend, and, when she happens to see her, she freaks out, throwing a beer bottle at her car and threatening to kill herself.

The teenage girl who was kind to Kyle earlier at the rave is also at the after party, and they strike up a conversation. He practices talking to her in the mirror, but the actual conversation doesn’t go exactly how he expected when he actually does it. He seems to be interested in her, but she doesn’t reciprocate. He follows other people, finding some in the basement having an odd conversation. They are discussing if they would switch genders from birth if they had the chance, and why. There, he finds a bowl of psychedelic mushrooms and decides to eat one.

Later, Kyle returns home and retrieves a gun, some ammunition and a spray paint can. He marches back with a crazed purpose, painting “NOW” on the sidewalks on the way. He approaches the house, immediately shooting everyone in view. He goes inside and does the same. Some hide, some escape, and then the police arrive.

This story is told through a series of flashbacks and flashforwards during the night and next morning following the rave, during the after party. The script doesn’t include any background information on any of the characters. The most extensive secondary story besides the massacre is the breakup between a girl and her ex-girlfriend, but even that hardly expands. Without any look into the people on-screen, the audience has no reason to feel emotionally connected to anyone, creating almost complete apathy for something that should be heartbreaking. The movie reveals little about the vicious killer’s motivation, because he seems to have a longing to be friends with the people he later murders. He doesn’t leave angry, and he doesn’t seem to be seeking revenge on anyone, yet he commits this heinous crime.

WALLFLOWER follows a very negative humanist and pagan worldview, with a man centered world presented where God is a question that doesn’t make sense to the characters, and almost anything goes. Everyone does what they please, and revelation comes by the pathway of drugs and leads to false New Age enlightenment about the universe. There is heavy drug and alcohol use taking place at the rave and the after party, so there is nearly constant substance abuse. Finally, people make inappropriate comments throughout regarding body parts or sex, the main female character is a lesbian, and WALLFLOWER contains many strong obscenities. Ultimately, the movie seems to offer little true insight.