"Fighting for Faith and Freedom" 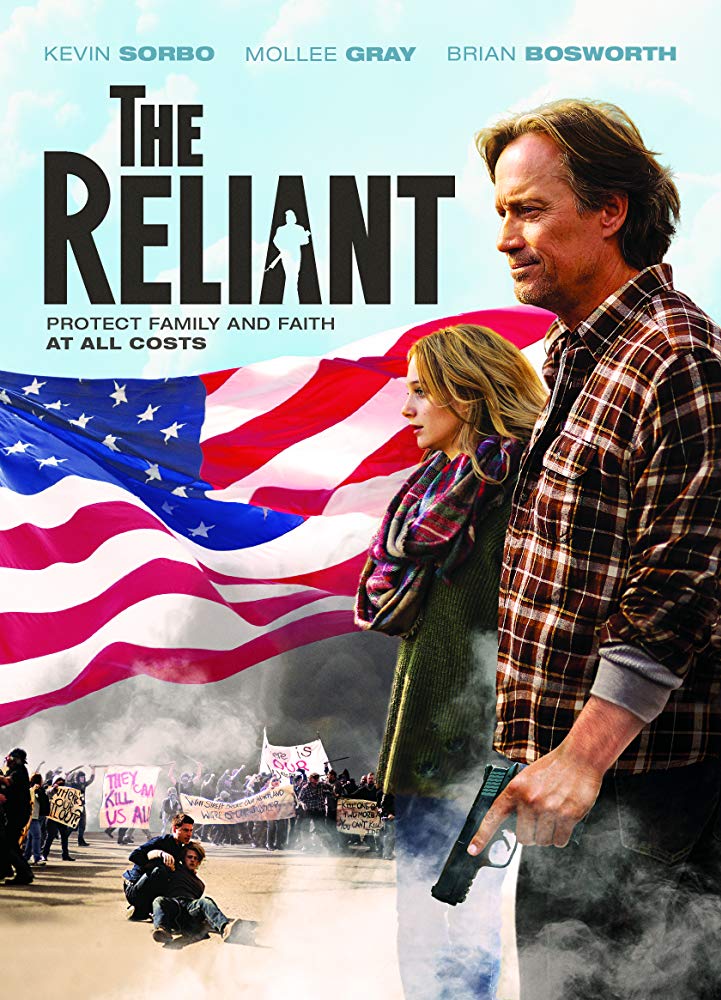 (CCC, BBB, PPP, L, VV, M):
Dominant Worldview and Other Worldview Content/Elements:
Very strong Christian, biblical, moral, evangelistic, and patriotic worldview, with many Scripture quotes, conversations about God, references to Jesus and the Gospel, two people lose their Christian faith but regain it and are baptized, prayers, hymn singing, four Christians witness to skeptics and nonbelievers, and a very strong defense of American liberty/freedom, especially the right to bear arms
Foul Language:
No obscenities and two light exclamatory profanities
Violence:
Strong, light and sometimes intense violence includes several gunfights, man saves another man’s life by waving a gun at his attackers, man shot with an arrow, it’s implied that a deer is killed with an arrow so that its meat can feed a couple young adults and their younger sisters and brother who are on the run and hiding in the wilderness from bad guys, bad guys try to break into a car being driven away by a young adult trying to protect his three sisters and brother, people wounded or killed with guns and rifles, riots depicted, some fighting, deputies subdue a criminal, and an implied gun accident occurs off screen
Sex:
No sexual content
Nudity:
No nudity
Alcohol Use:
Bad guy drinks something from a flask
Smoking and/or Drug Use and Abuse:
No smoking or drugs; and,
Miscellaneous Immorality:
Villain is out for revenge but eventually repents and gets saved and young adult woman’s brother expresses doubts about God and Jesus, but she keeps witnessing to him, often using Scripture to do bring his faith back.

THE RELIANT is an excellent adventure movie about the children of Christian parents in Ohio who must defend themselves when the social order breaks down and their parents are taken from them by a thug who’s out for revenge against their father. Defending both faith and freedom, including the right to bear arms, THE RELIANT is one of the most thrilling, best written and best acted contemporary Christian movies. There is some gun violence and many intense moments that warrant caution for some older children who may be sensitive about such things.

The movie opens with a distraught man named Jack (Brian Bosworth) carrying his daughter, Faith’s, body into a hospital in Zanesville, Ohio. A doctor, Rick (Kevin Sorbo), takes Faith away to examine her, even though his own wife is in the maternity ward giving birth to their new daughter. Jack tries to follow them but is prevented from doing so. He gets angry and pulls a gun. “I can’t lose my Faith,” Jack screams. “She’s the only one I have.” Using Jack’s concern about his daughter, a police officer eventually manages to calm Jack down and arrest him.

Seven years later, Doctor Rick and his wife, Liz, and their children Sophie, AnnaLee, Eli, and Faith are celebrating their older brother, Jimmy’s, birthday. Sophie, age 19, is engaged to a nice young fellow named Adam. At the birthday party, she gets upset when her father presents Jimmy with a new rifle for a present. Sophie tries to remind everyone about what happened to her sister, Becka, but the movie doesn’t provide any details. Her mother manages to calm Sophie. When Sophie’s alone in her room, she mysteriously hides some sort of key in a jewelry box. While all this is happening, news anchors on the TV mention that there are increasing riots in America’s major cities because of a collapse in the American dollar.

Rick tries to take Jimmy and Eli to a local store to buy some bullets for Jimmy’s new rifle, but there’s a terrible riot happening. The rioters invade the store, and the family barely escapes. Back home, Rick frantically tries to gather the family together to leave the city. However, he can’t find the key to the family’s gun safe, and it becomes clear that the key Sophie hid upstairs is the gun key.

Suddenly, some of the rioters show up at the house. They include Jack, the angry man from the hospital, and his mean young friend, Clint. Rick and Jimmy grab the few guns not locked up in the safe to defend themselves. Jack, Clint and the other rioters start shooting, and a gunfight breaks out. During the gunfight, Jack and Clint shoot Rick and wound Adam. They also wound Faith, the child that Liz was delivering when Jack brought his own Faith into the hospital. However, Jimmy, Sophie, AnnaLee, and Eli manage to spirit Faith away in the family SUV, while their mother, Liz, is left behind to be captured. With the gunfight over, Jack, who’s bent on revenge for Rick’s inability to save his own daughter, finally shoots Rick dead. He tells Clint to watch Adam and Liz while he tries to hunt down the other children.

Jimmy and the other children manage to escape, however. They hide out and try to survive in the woods on the supplies they managed to put in the van before escaping. Among the supplies are a teepee tent. The spot where they decided to hide is a favorite family spot. “Be prepared” was one of their father’s mottos during the troubled times that hit the country.

As the days and weeks drag by, Faith recovers, and the children finally retrieve some supplies from the house. They also run into Adam, who’s recovered from his own wounds but has disappointed Sophie because he’s become a scavenger and a thief.

However, Jimmy begins to doubt they can hide in the woods forever. He also begins to have doubts about the family’s strong Christian faith. “Where is God?” he asks Sophie, who tries to answer her brother, but her excellent answers don’t mollify her brother. Neither does the strong faith of their younger teenage sister, AnnaLee, who tries to lead the family in Christian prayers and hymns.

Can Sophie and AnnaLee make Jimmy see reason? Will Jack track them down? Finally, what happened to their mother?

THE RELIANT has a great cast of young actors. The ensemble is supported by fine performances from several older veterans, including Kevin Sorbo, Julia Denton and Brian Bosworth. The script is very well written and contains lots of intense, exciting action/adventure and moral, spiritual, psychological, and theological depth that adds to the character development. The result is one of the most thrilling, intense, enjoyable, stimulating, and emotionally powerful contemporary Christian movies.

THE RELIANT promotes both Christian faith and American liberty.

The movie is filled with great references to God, Jesus and Scripture, plus some prayers and hymns. The hymns are often led by AnnaLee, the middle sister. Also, Sophie tries to help Jimmy regain the faith he lost when their father was killed. Eventually, an early family tragedy involving Jimmy is revealed, and the emotional stakes in the movie are raised. Everything ends on several powerful redemptive notes that will grab the viewer’s heart and soul. THE RELIANT really has one of the best endings for recent faith-based Christian movies.

THE RELIANT has no obscenities or other similar lewd or obscene content. It does have lots of gun violence and many intense scenes as the family hides from or fights the bad guys. Consequently, MOVIEGUIDE® advises caution for some older children who may be sensitive about such things.