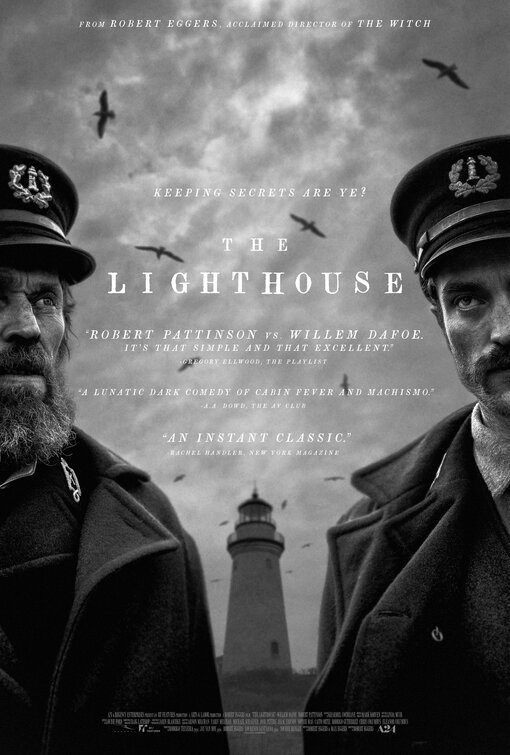 THE LIGHTHOUSE takes place on a small island off the coast of New England as two lighthouse keepers perform their duties. A young man named Winslow has just taken the job as the “second” to Thomas Wake. Every day, Winslow rises to struggle through tough physical labor, and then deal with Thomas, who drinks his weight in alcohol every night. As time passes, Winslow finds himself doing the same, but his mind begins to take a turn during the day. He dreams of a romance with a mermaid, sees strange creatures in the ceiling and begins to draw suspicions about his co-worker. However, when a storm hits the small island, it’s questionable if Winslow can hold onto his sanity.

THE LIGHTHOUSE is directed by the same director as the occult horror movie THE WITCH, and the two movies follow a very similar style. The overall tone is very dark, eerie and unsettling. THE LIGHTHOUSE is packed full of immorality, extreme alcohol abuse, violence, perversion, and sin. There is a lot of cursing and inappropriate sexual content. Media-wise moviegoers will find THE LIGHTHOUSE abhorrent.

(PaPa, H, O, C, LLL, VVV, SSS, NNN, AAA, D, MM):
Dominant Worldview and Other Worldview Content/Elements:
Strong pagan worldview with many other elements dispersed throughout, pleasures and flesh driven desires take precedence in the motivation for the storyline and characters, some pagan elements cross over into occult themes with superstitions coming true and belief in reincarnation, although there is one minor element where a man claims to be a “God-fearing man,” but he doesn’t behave like it and is never acknowledged again besides that one short conversation, many fantasy themes as it is unclear what is reality and what is delusion, a man says a sort of prayer to “King Triton” while trying to curse someone else
Foul Language:
More than 45 obscenities and profanities, with 15 GDs, two uses of the “f” word, and one time saying “Jesus, Mary and Joseph” as an exclamation, a man is shown vomiting, men are shown urinating into buckets or water many times, the bucket is shown once with urine and feces in it later being thrown into someone’s face, a man passes gas throughout the movie, a few inappropriate comments
Violence:
Extreme and strong violence includes a dead body is shown floating in the water, a man is slapped violently in the face, a man is very high above the ground and falls, a man angrily grabs a seagull and kills it by slamming it’s head repeatedly against concrete, a human head is found in a lobster trap, a few fistfights and wrestling, a man punches the glass on a clock causing his hand to bleed, a man is treated like a dog with a leash/collar and then showed buried alive, a man’s shoulder is chopped open with an ax, a man’s head is chopped with an ax showing a spray of blood, a man falls down a large staircase, a man is being eaten by birds shown to be very bloody and painful, and two stories about murdering another person
Sex:
Multiple explicit scenes showing self-abuse, a man fantasizes fornicating with a mermaid and is shown in a close up touching her breasts, one sex scene with the mermaid, a man is implied to be masturbating, and a bodily fluid is shown dripping down, a man says he would have sex with a steak
Nudity:
Upper female nudity shown multiple times a few times extremely close up in sexual situations, rear male nudity shown in a sexual manner, upper male shown while doing physical labor, one shot of the mermaid’s crotch area showing what is meant to resemble female genitalia, full male nudity shown from the side
Alcohol Use:
Extremely heavy alcohol use throughout and many examples of drunkenness, when the characters run out of alcohol they drink what can be assumed to be a fuel or kerosene mixed with honey
Smoking and/or Drug Use and Abuse:
Characters smoke tobacco in a pipe or rolled into a cigarette throughout the movie; and,
Miscellaneous Immorality:
Immoral content throughout including examples of lying and deception, running from the law, crimes without punishment, moral relativism throughout as there is no guide or compass for the characters, and they do as they please or what is the best thing for them.

THE LIGHTHOUSE takes place on a tiny island outside of New England back in the 1890s. A young man named Ephraim Winslow has just began his new job as “second” working directly underneath Thomas Wake, who’s been the lighthouse keeper on this island for years. Initially, Winslow seems to be a straight shooter, refusing the offer of an alcoholic drink because it’s forbidden according to the handbook. However, when he tries to pump some water into his tin cup, the brown color and even worse taste makes it impossible to drink.

Ephraim wakes up every day and begins to perform his tasks, carrying coal across the island, shoveling into the furnace and keeping up with the maintenance around the lighthouse. Although he feels he’s working very hard, Thomas constantly nags him, telling him what a terrible job he’s doing. Thomas has been doing his own thing for years, and the way he behaves would make it seem he’s used to being alone. He holds the only key to the top of the lighthouse and makes it clear that Winslow is not permitted up there. Winslow takes the few moments that he has alone to fantasize about a mermaid that he imagines has washed up on the shore. He pictures them together and allows his mind to wander.

After one too many laborious dinners with Thomas, Winslow finally decides to agree to a drink. This begins a new relationship with the two co-workers. They start to spend all night drinking together, passing out in different places, only to wake up the next morning forced to continue the tough physical work. As their days go on together, information begins to unravel about Winslow, and he grows suspicious of Thomas.

Soon, a massive storm hits, and the relief that was meant to bring them supplies won’t get to them until the storm has passed. The two men make do by drinking some sort of fuel mixed with honey in order to continue their drinking binge and not lose their feeling of intoxication. However, as the storm continues, the line between realism and insanity begins to severely blur, leading these men down a dark road.

THE LIGHTHOUSE is directed by Robert Eggers, who previously wrote and directed THE WITCH, and the two movies share a very similar style. They both follow a very dark and eerie style, bordering on scary at times. There are many fantasy elements, the characters imagining scenarios, and viewers left to question what is real and what has been imagined. The sole two actors in this movie carry it with great strength and ease, delivering powerful performances. This style of storytelling doesn’t appeal to everyone and is very subjective when it comes to the quality.

Sadly, THE LIGHTHOUSE has an extremely high amount of immorality and inappropriate content throughout and is governed by a strong pagan worldview with occult references. There are many explicit sexual situations that are completely unnecessary, as well as a total abuse of alcohol throughout the entire movie. The characters are drunk almost the entire time and show a total lack of morality. The Winslow character uses “GD” over 15 times, and they are both shown urinating many times, as well as once vomiting from overuse of alcohol. There is also a substantial amount of violence, showing blood spatters, and a few scenes that can be very disturbing. THE LIGHTHOUSE is not uplifting in any way, with a complete lack of anything redemptive. Media-wise moviegoers will find THE LIGHTHOUSE abhorrent.