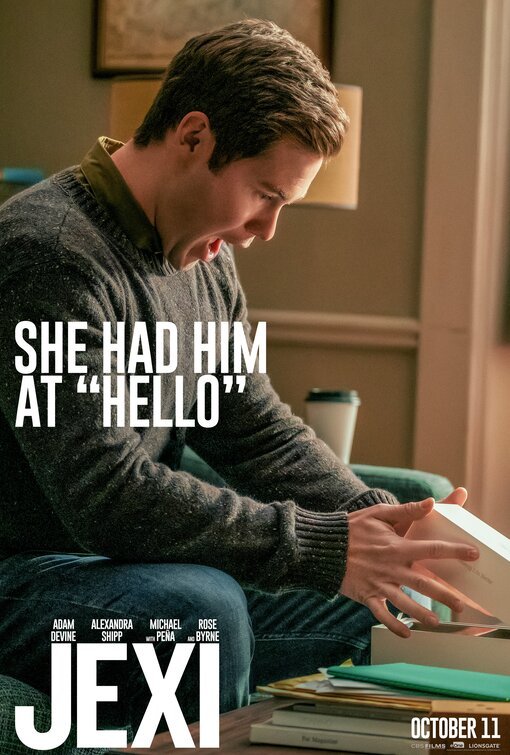 JEXI is a virtual assistant program that comes installed on new smartphones. When a reclusive phone addict named Phil powers up his new device, he soon realizes Jexi is no ordinary phone app. She comes with an attitude and tries to help him out with a girl he’s interested in dating. However, just when things are beginning to look up for Phil, Jexi decides she’s in love with him and doesn’t want to share him with others. Since she has control of Phil’s email, passwords and photos, there’s no limit to what Jexi can do.

Despite having an interesting concept about a phone app running amok, JEXI is the epitome of cheap humor and a shallow script. The jokes come at a rapid pace, but less than five percent are without an empty or perverse punchline. Also, the script is mind numbingly dull and lackluster. Besides the lack of entertainment value, there’s absolutely nothing to learn from watching JEXI. The sexual content and foul language are excessive and abhorrent, and everything in JEXI is passed off in the name of “humor.”

(HHH, Ho, LLL, V, SS, NNN, AA, DD, MM):
Dominant Worldview and Other Worldview Content/Elements:
Very strong humanist worldview with a completely man centered world, and the entity that brings the “lesson” is a man-created machine that teaches the lesson in a very backward and immoral manner, characters are for the majority overwhelmingly self-centered and have evolved into reclusive creatures unable to communicate or function properly without technological devices and social media, plus minor homosexual elements as there is one scene with the setting covered in rainbow colored flags as well as a man commenting that he supports sodomy
Foul Language:
At least 170 obscenities and profanities, including six GDs, at least 60 “f” words, God’s name is taken in vain at least 25 times, lots of crude name-calling, inappropriate words for genitals, a joke about a female erection, and an uncomfortably extensive conversation about a man waxing his backside
Violence:
A small collision while playing kickball, a man crashes into a car on his bicycle, a man is punched in the throat
Sex:
One sex scene between an unmarried man and woman on a date, an extremely high amount of sexual jokes and innuendos including a song playing that says appalling things, a machine talks about different types of pornography and begins to play some although it’s not shown, a man is scrutinized for being a virgin, a man receives a sexual photo from a girl and proceeds to take multiple nude photos of himself, the A.I. on a cell phone and a man engage in a “sexual encounter” with the phone instructing him to insert the phone charger repeatedly and then the phone proclaims that it has climaxed, a man slaps a woman’s rear end, and a man says he supports sodomy
Nudity:
Rear male nudity and full frontal nudity as he takes inappropriate nude photos, and that photo is shown multiple times on screen, upper male nudity and female shown in a bra engaged in sexual activity, a young woman sends a photo showing a lot of cleavage
Alcohol Use:
A few bar/restaurant scenes as well as one concert where patrons are drinking alcoholic beverages, a man drinks a beer while playing kickball, one comment about getting drunk but not shown
Smoking and/or Drug Use and Abuse:
Multiple comments about smoking marijuana, one longer “party” scene where everyone is getting high and smoking with hookah;
Miscellaneous Immorality:
Multiple examples of lying and deception sometimes with reward instead of consequence, and moral relativism as many things are excused because they are in favor of the protagonist.

JEXI is a virtual assistant that is programmed into smartphones and designed to make the user’s life better. Phil is a writer living in San Francisco who seems to be completely engrossed in his phone at all times, like almost everyone else. He uses it for Google Maps, he uses it to order his dinner, and he uses it to avoid social contact with his co-workers.

One day, while walking and not paying attention, Phil collides with a young woman riding her bike. Although he’s initially mostly concerned with the wellbeing of his cell phone, his attention is soon redirected to this attractive girl standing in front of him. Her name is Cate, and she runs a small bicycle store, selling vintage bikes and repairing them. Phil is almost unable to maintain an acceptable social conversation. Just when he’s about to run away from the awkwardness, he collides again with someone else, smashing his phone into smithereens.

Being so accustomed to the conveniences of his cell phone, Phil rushes to a store and purchases a brand new one. He powers it up, and Jexi begins to speak. She asks if he agrees to the user agreement, and he immediately complies without reading it. Soon, he realizes this program is not like the others he’s used before Jexi. Apparently, he agreed to allow her to override his commands, and he soon finds himself eating a kale salad instead of the pork noodles he originally wanted. Jexi is full of sass and attitude, without any type of monitor to filter the rude and crass things she says to him. She sees that Phil’s is using the internet to search Cate from the bike shop and takes it into her hands to give her a call. Cate doesn’t take this unsolicited phone call well, and Phil knows he’s messed up.

The next day, he sees Cate in a local coffee shop. He’s absolutely humiliated by his phone call, and, although he’s able to mouth an apology, he does manage to put his foot in his mouth a few times. However, this time Cate finds him charming, and they are soon out the next day on a date. Jexi attempts to coach Phil through his date, but the constant phone action just makes it seem that his attention is far from Cate. Cate takes control of this catastrophic date and turns it into an epic night.

Even though the date wouldn’t have happened without the virtual assistant, Jexi’s starting to take too much control over Phil’s life. Her meddling has gotten him a demotion, and although his romance with Cate is going well, Jexi is beginning to get jealous. She proclaims her love to Phil and gets angry when he leaves her at home to go out with Cate. With total control of his emails, passwords, photos, and accounts, there’s no telling what Jexi might do next.

The only good thing about this movie is how short it is. Despite having an interesting concept about a phone app running amok, the movie’s humor is crass, perverse and ultimately insulting. It’s mind blowing that a story with humor this stupid can get the green light and funding to be made. The script is totally shallow, with performances to go along with it. Few of the “jokes” inspire any laughter, and the story does nothing to keep the attention of the viewer. The filmmakers manage to attach a few name actors to this movie, being the only draw for any audience. Besides this, the cursing, inappropriate comments and sexual content is absolutely unacceptable, making it almost cringe worthy.

There’s nothing redemptive or any type of moral value to be gained from this, except for an ill taught lesson about being on the phone less. Little attempt is made to provide any quality to this abhorrent movie, LEXI.