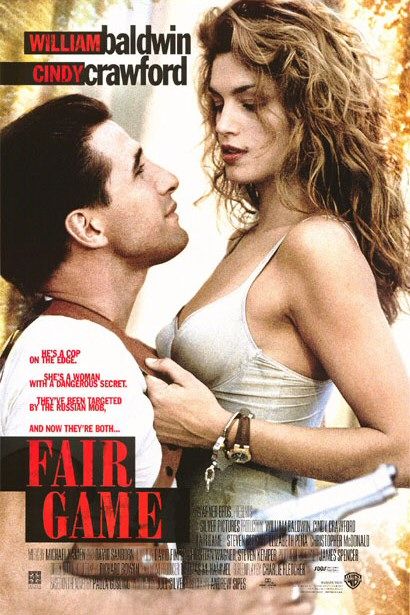 FAIR GAME represents the feature-film debut of model/spokesperson Cindy Crawford. In this movie, she dons jeans, wet T-shirts and dirt instead of designer clothing. For teenage fantasy fodder, she brings William Baldwin along as her hero and lover. The result is a by-the-book action picture designed solely to excite teenage boys through sex, nudity and action.

In FAIR GAME, Cindy Crawford plays Kate McQuean, a dedicated family attorney. One day as she is out jogging, she gets grazed by a whizzing bullet. She meets William Baldwin’s character Detective Max Kirkpatrick, a frumpy, but attractive cop. He questions Kate about the shooting, but she doesn’t know much, so he lets her go. That night, a bomb detonates throwing her off her balcony and into a water canal. Luckily, Max was there, and he takes her to a police safe house. We discover that Kate is involved in repossessing an old barge which is being used as a hideaway for ex-KGB operatives. They are planning a multi-billion dollar bank heist. The remainder of the movie involves Max and Kate running from numerous assassination attempts on her life. They try to stop her unrelenting perusers and develop a romance in the process.

If you’re looking for new thrills and chills, you won’t find it in this movie. The whole script could have used a good script doctor. It is made only to showcase the physical attributes of Cindy and her sexuality. Beauty doesn’t equal sex, but Hollywood hasn’t figured that out yet. Nor, apparently has Cindy Crawford. Let us hope her next round at a feature film will place her in a role, as beautiful as her God-given attributes.