"God Will Never Give You More Than You Can Handle" 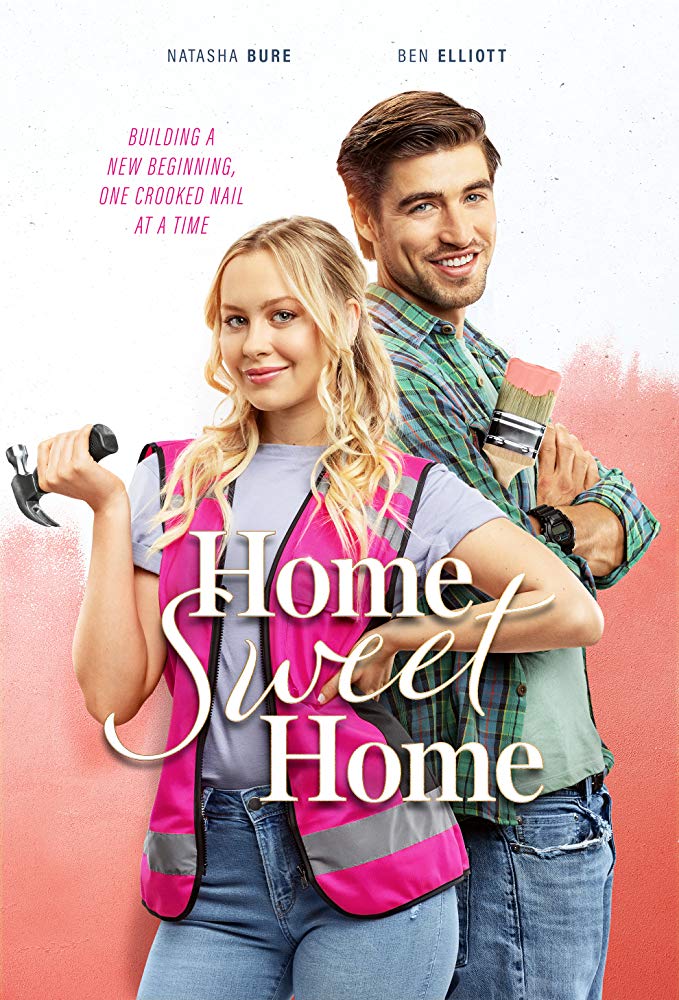 HOME SWEET HOME is a faith-based romantic comedy on Pure Flix about a young girl named Victoria who chases after a new guy named Jason in her new home church. Unknown to Victoria, Jason is a devout Christian and healing from a broken relationship. Victoria joins Jason’s volunteer home building ministry in the church, but she’s not sincere about her faith and isn’t upfront about her feelings toward Jason. Just before Jason is about to be open to a relationship with Victoria and arrange a date, another man enters the picture. Now Victoria is stuck between two guys. Victoria has a decision to make, but first she better examine her religious convictions.

HOME SWEET HOME is a cute romantic comedy with strong faith-based content that drives the characters’ decisions. The acting could be better, but Christ is uplifted and glorified throughout the movie. Ultimately, HOME SWEET HOME is a good movie for teenagers and young adults, because it’s about finding faith while looking for love. As such, it’s both edifying and enjoyable. For all these reasons, MOVIEGUIDE® finds HOME SWEET HOME positively delightful.

(CCC, BBB, A, M):
Dominant Worldview and Other Worldview Content/Elements:
Very strong Christian, moral worldview where Christian faith is uplifted and encouraged, people attend church services, people build homes for those in need, and several Scripture references throughout, particularly Matthew 19:26,
Foul Language:
No foul language,
Violence:
No violence,
Sex:
No sexual immorality, but a dating couple kiss twice,
Nudity:
No nudity Alcohol use: Man and a woman are pictured drinking socially Smoking and or Drug Use or Abuse: No smoking or drugs and;
Miscellaneous Immorality:
Female character wears loud makeup and exposes her arms and legs to get a male’s attention, then succeeds in flustering him.

HOME SWEET HOME is a faith-based romantic comedy, now streaming on Pure Flix, about a young woman named Victoria who chases after the new guy in her co-worker’s home church. Unknown to Victoria, Jason is a devout Christian healing from a broken relationship. HOME SWEET HOME is a cute movie with significant Christian content about finding faith while looking for love.

Victoria Tremont (played by Natasha Bure) is a social butterfly who works in a local coffee shop. Known for her flirtatious nature, Victoria turns on the charm when Jason Holman enters, but the handsome stranger is completely uninterested. Confused, Victoria tries to insert herself into Jason’s life. Victoria finds out that her co-worker attends the same church he does, Sun City. She also discovers Jason has just moved into town to start his own volunteer ministry in the church for building affordable housing for people.

Victoria shows up to the first meeting in full hair and makeup, finally catching the attention of Jason, who’s thrown off guard by her dolled-up look. Victoria signs up for the first day of the building ministry meeting and meets Meagan, a cute, shy girl who’s in love with Wyatt, one of the other guys from church. Victoria and Meagan make a deal. If Meagan teaches Victoria how to build a house, then Victoria will teach her how to get Wyatt.

Meanwhile, Jason begins to like Victoria. However, after being burned from a past serious relationship in California, he’s hesitant to enter into a relationship. Also, Jason’s pastor advises against getting involved, saying that Victoria looks like a handful, so Jason maintains his distance. As the building of the house continues, Victoria’s brother-in-law leaves her sister for another woman, and Victoria has to build a new home for her nieces and nephews.

While she rebuilds relationships, Victoria tries to become a “fake” Christian, learning Bible verses and Jesus jargon. It doesn’t work until a car crashes into her own home and takes out a piece of the wall.

Later viewers learn that this wasn’t the first time Victoria’s house needed some remodeling. When Victoria was five years old, her parents divorced, leaving her without a true male role model in the house. Victoria goes to sleep at her sister’s house. Victoria spots her Bible, a gift from her grandma and begins to read Matthew 19:26, the same verse she began to read when the car crashed into her home.

Jason comes over to Victoria’s house to inspect the damage, revealing his own personal damage from his serious ex-girlfriend Rachel. Victoria and Jason talk for a while. He then invites Victoria to the concert being held at their church. However, Victoria hasn’t totally transformed. Another man, Ron, is interested in her, and she and Ron already have made plans for the same day as the concert.

Stuck between two guys, Victoria prays, but they both show up at the coffee shop. Jason leaves when he sees Ron holding a bouquet of flowers for Victoria. She runs after Jason and he confronts her about why she joined the volunteer project. She admits that she likes him and wants to be closer, but Jason storms off, angry at her for lying.

Victoria goes on the date with Ron, only to discover that he’s also a complete fake. She leaves Ron and drives to the concert to see Jason. However, God steps in, and Victoria is forced to decide what she really believes.

HOME SWEET HOME is a cute romantic comedy with strong faith-based content that drives the characters’ decisions. The acting could be better, but Christ is uplifted and glorified throughout the movie. Ultimately, HOME SWEET HOME is a good movie for teenagers and young adults, because it’s about finding faith while looking for love. As such, it’s both edifying and enjoyable. For all these reasons, MOVIEGUIDE® finds HOME SWEET HOME positively delightful. HOME SWEET HOME was a submission to the Kairos Prize in 2017.