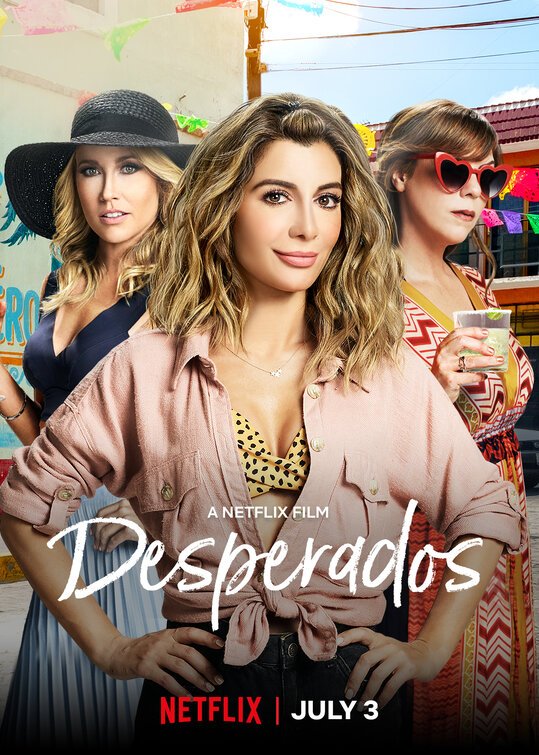 DESPERADOS focuses on Wesley, a young woman desperate to get her life together after many failed job interviews and dates. After a blind date fails, Wesley meets the man of her dreams in Jared. After a month of dating, Jared goes silent. Wesley’s worried their relationship’s just going to be another failed attempt at finding herself. She sends a ranting email to Jared but finds out Jared’s been in an accident in Mexico. Now, Wesley must travel to Mexico with her two reluctant friends to delete the email before Jared reads it.

DESPERADOS has a talented roster of actors but ends up drowning what little charm it has with lots of foul language, an obsession with lewd, crude joking, and a feeble story. The movie has a strong Romantic worldview, with pagan elements, where the characters are motivated by their lust for self-love and also visit a pregnancy shaman. DESPERADOS does contain brief instances of forgiveness, honesty and unconditional love between Wesley and her friends. However, due to the excessive lewd content and constant foul language, MOVIEGUIDE® deems DESPERADOS excessively immoral and unacceptable.

(RoRoRo, Pa, Ab, FR, C, B, HoHo, LLL, V, SS, N, AA, DD, M):
Dominant Worldview and Other Worldview Content/Elements:
Very strong Romantic worldview with characters being motivated by their sexual desires and baseless relationships, with light pagan elements, including an immoral speech about marriage, a moment of false religion where a character visits a pregnancy shaman called the “angel of peace,” and movie opens with a character applying to a Catholic school where two crucifixes and a Bible are seen on screen, and some forgiveness and unconditional love occur, plus there are some homosexual references, including a lesbian kiss
Foul Language:
At least 75 obscenities (including some “f” words), 48 profanities (including two instances of GD), many of the obscenities are seen written on screen through text bubbles, plus a woman accidentally vomits in another woman’s face, and several obscene gestures occur
Violence:
A woman falls and hits her head, and some blood is shown, a character is electrocuted by a fence, a woman is punched in the face by another woman, multiple characters jump off a balcony injuring themselves, but it’s played as a joke with nothing graphic, a woman falls from a tree and gets scratched by a cat, a man is covered in cuts and bruises after getting into a car accident that happens offscreen, a separate scene depicts a car crash, but no one is hurt
Sex:
Strong sexual content includes a dolphin thrusts against a woman in the ocean, the woman also gets hit in the face with the dolphin’s genitals which is graphic but brief, an unmarried couple kiss passionately and fornicate, but no nudity is shown, a character experiences cheating and is encouraged to have a “revenge affair,” a brief plot point shows a homosexual hook-up, two women kiss each other passionately, and while no nudity is shown groping is seen on screen, later it is stated that the two women had lesbian sex, there is a running joke of a character being a pedophile, and several scenes depict inappropriate, although accidental, interactions between a young boy and a 30-year-old woman, in one instance a sex toy is dropped on the ground, and the young boy picks it up, the woman accidentally enters the boy’s hotel room wearing nothing but a towel, the towel is caught on a hook, and the boy closes his eyes but accidentally touches her breast while handing back the towel, lastly the boy performs CPR on the woman at a later point in the movie, unmarried couple kisses passionately, a woman kisses a few men on the cheek as a gesture of friendship (non-sexual), a man holds a plate in front of his pants, a lot of the sexuality comes by way of the dialogue, in one instance a school guidance counselor says that abstinence-only sex education doesn’t work, the counselor suggests self-abuse to girls who are pressured to get physical, there is a brief conversation about birth control pills and erectile dysfunction medication, the eggplant emoji is used often in reference to male genitals, there are characters who are anti-marriage and view divorce as something to be celebrated, and many jokes describe sex, male and female genitalia, ejaculation and self-abuse in graphic detail
Nudity:
A woman runs through a hotel naked, but only her back is seen as she covers herself with her hands, a towel or a blanket, some women wear swimsuits that show cleavage, there is mention of a girl whose boyfriend sent a topless picture of her to his teammates
Alcohol Use:
Several characters drink wine, beer and other forms of alcohol throughout the movie, at home, in bars, and on the beach, several characters get drunk multiple times
Smoking and/or Drug Use and Abuse:
Jokes about drinking, cigarettes and drug dealers, a character takes several Percocet pills to fall asleep;
Miscellaneous Immorality:
Lying, deceit and there’s malicious joking about a character’s dead father.

DESPERADOS follows, Wesley, a 30-year-old woman who’s unemployed and single despite having plenty of interviews and blind dates. Feeling as if she’s fallen behind in life compared to her two best friends, Brooke and Kaylie, Wesley is desperate to find a way to advance her life and not have to eat the food of the child she babysits.

After a failed blind date, Wesley stumbles into a guy named Jared, who checks off all the boxes. He’s handsome and seems interested in Wesley. However, soon after meeting Jared, she realizes that she’s faking her way into his heart but is willing to overlook their lack of chemistry to begin her new life with him.

After a month of dating Jared, Wesley doesn’t hear from him for five days and is distraught at the idea that Jared could be another failed attempt at a relationship. She’s consoled by Brooke and Kaylie, who, along with the help of some alcohol, help her write a calloused and hostile email to Jared. Regrettably, Jared calls Wesley just as the email is sending, telling her about a severe car crash he experienced while in Cabo, Mexico.

Having misinterpreted Jared ghosting her, Wesley knows that her perfect image will be ruined if Jared reads the email. Despite some reluctance, she convinces Brooke and Kaylie to join her on a mission to go to Cabo and delete the email from Jared’s computer while he recovers in the hospital. Eventually, Wesley must decide what’s more important to her: having real relationships with people who see her for who she truly is, or faking it for the ideal man.

DESPERADOS is a romantic comedy that leaves prudence and storytelling at the door in favor of sexual escapades and crude language. DESPERADOS has a talented roster of actors with Nasim Pedrad who starred in 2019’s ALADDIN and Lamorne Morris from NEW GIRL but ends up drowning out what little charm it has with excessive immorality and crude dialogue.

DESPERADOS has a dominant Romantic worldview and some pagan elements. Characters are motivated by their lust for self-love. They also visit a pregnancy shaman. DESPERADOS does contain brief instances of forgiveness, honesty and unconditional love shown to Wesley by her friends. However, due to the excessive sexual content, and constant profanity, MOVIEGUIDE® deems DESPERADOS excessively immoral and unacceptable.