"Give God a Chance" 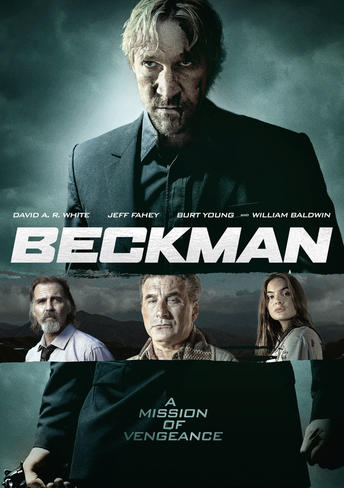 BECKMAN is a thrilling action movie set in Los Angeles about a former hitman named Aaron Beckman who gives his life to Jesus Christ. Aaron gets baptized and eventually starts leading a congregation as a pastor. However, an evil man named Reese threatens to hurt Aaron’s adopted daughter, Tabitha, for Reese’s cult. Eventually, Aaron finds himself wrestling with his faith about when he will stop his violent attempts to rescue Tabitha. Along the way, Aaron encounters people he knew before giving his life to Christ. He also uncovers a human trafficking ring. The choice about how Aaron acts in stopping this ring and rescuing Tabitha will be up to him.

BECKMAN unites a compelling conversion movie with Liam Neeson’s TAKEN movie, geared toward a Christian audience. BECKMAN has stellar action scenes and plenty of jeopardy and suspense, but the beginning is a little jumpy and confusing. BECKMAN has a strong Christian worldview that depicts the importance of repentance, faith and letting God direct your life. MOVIEGUIDE® advises strong caution however, because of some heavy violence and a human trafficking subplot in BECKMAN.

(CCC, BBB, PaPa, FR, VVV, A, M)
Dominant Worldview and Other Worldview Content/Elements:
Very strong Christian, biblical, moral worldview where man comes to faith in Christ after a career of violence and gets baptized and becomes a pastor at an L.A. church, Scripture is quoted, repentance and faith are extolled, Christian characters encourage others to look to God instead of themselves to overcome life’s challenges, faith community adopts repentant sinners into their community with open arms, the value of church is extolled, worship is depicted in a church, confession of sins is extolled, and protagonist takes down a human trafficking ring, with some moderate paganism where the villain is a cult leader and has followers who obey him at every turn, one scene at the end shows the cult leader with face paint and looking to his followers to do his bidding to complete a ritual, but it’s clear that this isn’t something worthwhile, and cult leader character makes a comment about “the universe” putting things in order and talks about finding true freedom, but it’s clear he’s just too creepy to believe
Foul Language:
No foul language
Violence:
Some very strong and strong action violence includes gunfights, some characters get wounded from gunfire, woman’s neck breaks at the hand of a villain causing her to die, hand to hand combat, quick choking, characters get held captive against their will, woman gets stabbed in the back, and blood is depicted, character holds a drill to someone’s eyeball which inflicts an injury, character gets hit across the head with a rock, man gets shot through the hand, character takes people against their will in car, and the car spins out on the road after a series of events, woman slices a man across the face causing him to bleed, and villain mentions that some captive female teenagers are sold to high profile clients for sex, but it’s clear that the females don’t want that
Sex:
No sex scenes, but movie involves an evil sex trafficking operation
Nudity:
No nudity
Alcohol Use:
Alcohol use at dinner
Smoking and/or Drug Use and Abuse:
No smoking or drugs; and,
Miscellaneous Immorality:
Lying, bounty hunters come after people in search of money even though they’ve been friends in the past.

BECKMAN is a thrilling action movie about a former hitman who gives his life over to Jesus Christ, but finds himself wrestling with his faith when an evil cult leader kidnaps his adopted daughter. BECKMAN has a strong Christian worldview that depicts the importance of repentance, scripture and letting God direct your motivations in life, but MOVIEGUIDE® advises strong caution for teenagers and adults for some of the violence.

The movie begins with high stakes. The protagonist, Aaron Beckman, runs out of a warehouse after being forced to fight and kill his friend, and abscond with $350,000. Aaron finds solace at a church in the area. The pastor greets him with open arms. Aaron offers the pastor all of the money in exchange for shelter, but the pastor only takes what he need to save the church and burns the rest of the money. Aaron stays at the church for months and comes to know Jesus as his personal Lord and Savior. Aaron gets baptized.

A year later, the pastor dies, and Aaron takes over the church. However, Aaron’s still haunted by his past and wants to abandon the church. At that point, a troubled teenager named Abigail arrives and compels Beckman to stay. The movie jumps ahead another year. Beckman and Tabitha have found happiness as father and adopted daughter. Inspiring each other to find meaning and joy in life.

Things seem to be perfect for Aaron, Tabitha and their church community. However, a sudden flash forward shows Beckman screaming and driving recklessly into the desert.

Cut to ten hours earlier. A group of thugs led by a man named Reese burst into the church office looking for Tabitha. Apparently, a fellow church member around Tabitha’s age named Tom, talked about Tabitha to one of Reese’s henchmen, which led them to the church. Before finding the church, Tabitha had escaped from Reese’s cult, but Tom didn’t know that. Reese and his people kidnap Tabitha and wind up killing a sweet woman named Abigail while cracking a pistol over Beckman’s head, knocking him unconscious.

Cut back to Aaron, who’s now trying to do whatever it takes to save Tabitha from Reese and his cohorts. One of the thugs with Reese in the church was a woman named Janice. Aaron successfully locates Janice. Her life seems unassuming, but she’s actually a highly skilled killer. Aaron takes Janice, her brother and her husband hostage in their car, but the car has an accident and an injured Aaron ends up in Janice’s basement with two female captives.

Aaron escapes, however, and resumes his search for Tabitha. However, there’s another problem for Aaron. A $100,000 bounty has been placed on his head. A few interested bounty hunters find Aaron. Aaron escapes from two of them, but a third man shows him mercy.

Meanwhile, Tabitha’s friend, Tom, winds up running with Aaron. Tom tells Aaron that the violent methods he’s using don’t align with his faith in Christ. Tom offers a dollop of wisdom that Aaron should give God a chance.

Will Aaron take Tom’s advice, or will he continue to pursue Tabitha’s rescue as he pursued other people before he gave his life to Jesus?

BECKMAN is like a marriage of a compelling conversion movie and Liam Neeson’s TAKEN, geared toward a Christian audience. BECKMAN has many noteworthy elements like some stellar action scenes and plenty of jeopardy and suspense, but the beginning jumps too much. As a result, the first act is a bit confusing, so some viewers may get lost trying to follow the plot.

That said, BECKMAN has a strong Christian worldview that depicts the importance of repentance, scripture and letting God direct your motivations in life. Characters who know Jesus as their Lord and Savior consistently encourage the protagonist to look to God for help instead of taking matters into his own hands. The movie also has a strong message against human trafficking, which becomes a major subplot in the movie’s second half. BECKMAN has some strong and very strong violence, however, including many depictions of blood, gunfire and similar things. There’s also one scene where a villain talks about selling teenage girls to high profile clients for sex. So, MOVIEGUIDE® advises strong caution for teenagers and adults for BECKMAN.