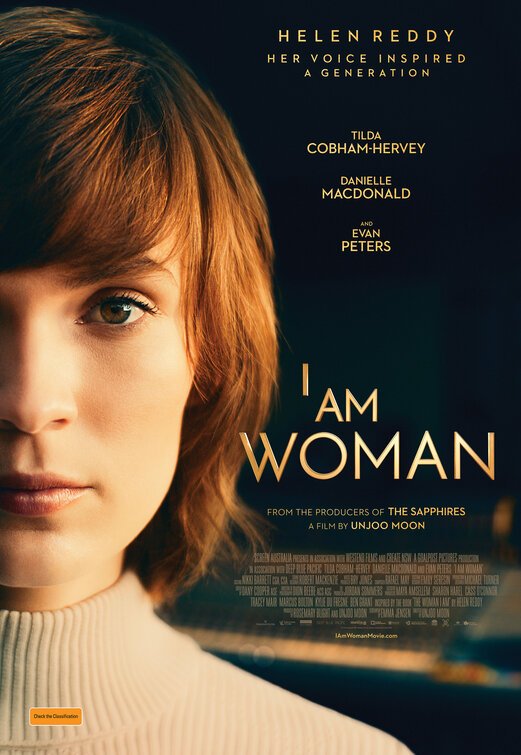 I AM WOMAN zooms in on the life of singer Helen Reddy. Divorced, Helen and her toddler daughter, Traci, move to New York City from Australia in 1966 so that Helen can sign a record deal. However, the deal collapses, and Helen almost calls it quits. Then, she meets Jeff Wald, who becomes her lover, manager and husband. The pair and Traci move to Los Angeles, hoping Helen’s music will find more acceptance on the West Coast. After months, it finally does, when one of Reddy’s songs becomes a feminist anthem. Eventually, though, Jeff’s drug abuse puts a damper on happiness.

I AM WOMAN has great production values and captivating performances by the two people playing Helen Reddy and her husband. Helen clearly loves her two children, but I AM WOMAN has a strong Romantic, leftist, pro-abortion, feminist worldview. It promotes following your dreams without guidance from God, female empowerment and radical leftist Civil Rights ideas. Also, the movie suggests women can only be truly fulfilled if they have professional careers. Sadly, I AM WOMAN has lots of unnecessary strong foul language.

(RoRo, PCPC, FeFe, BB, C, FR, Ho, LLL, V, S, A, DD, M):
Dominant Worldview and Other Worldview Content/Elements:
Strong Romantic, politically correct, feminist, pro-abortion worldview about an Australian woman becoming a popular vocal artist and a leading voice in the “women’s liberation” and “feminist movement” in the 1970s, including an “Keep Abortion Legal” sign, a focus on following your dreams with guidance from God, a focus on women sometimes or often finding more fulfilment from a career than family, the pro-abortion Equal Rights Amendment is promoted, a popular song becomes a feminist anthem, but mitigated by some strong moral elements as parents care for their children and friendship is extolled, and one positive reference to God being on a character’s side when the person followed their dreams, plus a politically correct false religion reference occurs when Helen says while accepting an award that she’d “like to thank God because she makes everything possible,” and a quick mention of homosexuality as protestors take to the streets in the 1970s
Foul Language:
At least 51 obscenities (including about 38 “f” words), six profanities (including two profane mentions of Jesus), a characters flips off some photographers, one toilet reference, and use of the British/Australian curse word “bloody”
Violence:
A husband gets angry sometimes but never hurts his family physically, but he does get into a tussle with a man in one scene as he holds a knife and threatens to kill someone in another scene
Sex:
Implied fornication as a man comes to a woman’s door with her underwear from the prior evening and a dating couple kisses then later gets married
Nudity:
No nudity
Alcohol Use:
Social alcohol use
Smoking and/or Drug Use and Abuse:
Smoking, characters seen snorting cocaine a few times, character has problems with drug abuse, and mentions of marijuana in a positive way, though movie says the real-life subject of the drug abuse gets sober and has been sober for over 30 years; and,
Miscellaneous Immorality:
Greed and some content featuring examples of a dysfunctional family.

I AM WOMAN is a biopic that zooms in on the life of Australian vocal artist Helen Reddy, who became an icon of the women’s Civil Rights movement with a feminist anthem. The main performances in I AM WOMAN are extremely good, and the movie is pretty engaging, but the movie has a strong Romantic, feminist, pro-abortion worldview with lots of gratuitous strong foul language and references to drug abuse.

I AM WOMAN begins in New York City in 1966. Helen Reddy and her toddler daughter, Traci, are in the Big Apple to close a record deal that falls through. Along her journey in the big city, Helen meets Lillian, a fellow Australian woman who’s a music reporter in town. Lillian throws Helen a birthday party to welcome her to the city, and Helen meets a young man named Jeff Wald who’s taken with her.

After a brief courtship, Jeff, Helen and Traci venture to Los Angeles where Jeff and Helen will marry, and he will manage her music career. Helen seems indignant that the music industry doesn’t like her musical persona, but still she insists she’s more than a housewife and capable of greatness. While putting Traci to bed one night, Helen comes up with “I Am Woman,” a 1971 song about female empowerment that becomes a hit in 1972 and an anthem for the “women’s liberation movement” in 1972. The song catapults both her and Jeff into an overnight success.

Helen begins performing the song everywhere and becomes a face for the women’s movement of the 1970s. The song is used to support the pro-homosexual Equal Amendments Right (ERA). During this time, Helen gives birth to a son, but Helen’s marriage with Jeff has become more business-like than a partnership, and they bicker constantly.

One day, Lillian moves to Los Angeles, but her reception from Helen is less than friendly because Helen’s now a global superstar. Sadly, Lillian dies of asthma-related complications, but Jeff insists that Lillian knew Helen loved her, and they continue on their tour and don’t go to her funeral.

Eventually, Jeff’s infatuation with narcotics ends his marriage with Helen, and they go their separate ways. Helen takes years off from singing until her now adult daughter, Traci, insists she sing her iconic “I Am Woman” song in 1989 in Washington, D.C.

The movie concludes by citing information about the real-life characters.

I AM WOMAN has captivating performances by Tilda Cobham-Hervey as Helen and Evan Peters as Jeff. The costumes and color correction seem historically accurate. Also, some of the shots in the movie consist of engaging slow-motion moments showing Helen and Jeff dealing with stardom as Helen becomes famous. These things add up to a pretty engaging movie

I AM WOMAN also shows Helen and Jeff caring for their children. Otherwise, however, it has a strong Romantic, politically correct, feminist worldview. For example, Helen is focused on following her career dreams but finds those dreams stymied by a male-oriented society. Furthermore, the movie’s radical feminist focus displays some disdain toward men in general and promotes the idea of the professional career woman, at the expense of women who just want to be mothers and homemakers. Also, a banner in one scene reads “keep abortion legal,” so being pro-abortion is clearly part of the movie’s radical feminism. Finally, the movie strongly supports the Equal Rights Amendment (ERA), which gives the United States Congress and the President the power to enforce a constitutional amendment declaring, “Equality of rights under the law shall not be denied or abridged by the United States or by any State on account of sex.” The movie doesn’t get into any of the conservative arguments against the ERA. For example, conservatives believe the ERA would outlaw all restrictions on abortion, force taxpayers to fund abortion no matter their personal religious and moral beliefs against abortion, deprive working women of special legal protections in the workplace, endanger the privacy and safety of women and girls by removing sexual designations for bathrooms, locker rooms, jails, and hospital rooms, destroy Social Security benefits for stay-at-home mothers, ban legal obligations of husbands to pay dependent wives’ medical bills, and wipe out state laws that exempt a woman from having to pay her husband’s debts even if he abandons her. Also, women already have equal rights to education, housing, public accommodations, and employment under the 14th Amendment.

I AM WOMAN also has an expression of false religion. When accepting an award, Helen says she’d “like to thank God because she makes everything possible.” It is important to reject such feminist identifications of God because, in the Bible, God has chosen to present Himself by stressing masculine qualities of fatherhood, protection, direction, strength, etc. Also, considering all the incredible violence that godless men create, it’s more important for men to have an All-Powerful Father God to follow than for women to have some politically correct designations for the Deity who created them. Besides, the Bible says women were created from men, so the use of masculine pronouns to describe God actually includes women. Also, the Word of God in the Incarnation chose to come as a man, Jesus, because it was the man Adam who brought sin to all the male and female descendants of Adam, which includes Helen Reddy and Gloria Steinem. In addition, women have many women of faith they can emulate, including the Virgin Mary, Sarah, Ruth, Esther, Miriam (the sister of Moses), Rahab, Elizabeth (the mother of John the Baptist), the deaconess Phoebe (Romans 16:1), Lydia (Acts 16:15), and Prisca, who with her husband risked her life to save Paul’s.

I AM WOMAN also contains lots of strong gratuitous foul language and, of course, some drug references, including the examples of Jeff’s drug abuse that leads to his breakup with Helen.