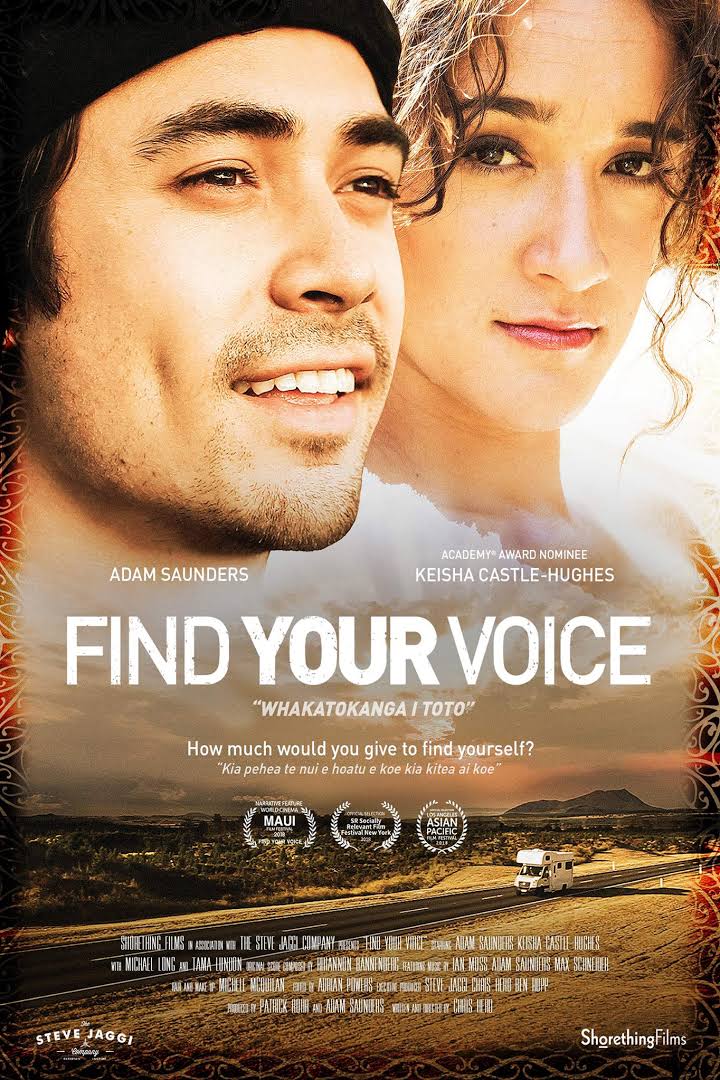 FIND YOUR VOICE is a comedy from Australia and New Zealand. A shallow, conceited young Maori man in Sydney named Elvis, or “E” for short, thinks he’s God’s gift to rap music. Despite having a beautiful singing voice, E pursues a rap music career because he thinks that’s where fame and fortune lie. However, E has no talent for rap music. When he wins the lottery, he decides to travel to New Zealand to reconnect with his ethnic roots and his family. Once there, E becomes interested in a pretty singer. However, his ego and pursuit of fortune get in his way.

FIND YOUR VOICE has some funny, touching moments, but the plot meanders. Also, the lead character is unappealing and annoying. FIND YOUR VOICE has a light moral worldview. The lead character’s eventual self-awareness overcomes his conceit, selfishness and misguided pursuit of fame and fortune. However, it takes a series of disasters and family tragedy to alter his behavior. FIND YOUR VOICE also contains many unnecessary obscenities and profanities and a scene of substance abuse. So, MOVIEGUIDE® advises extreme caution.

(B, Ro, C, FR, Pa, LL, V, S, N, AA, DD, MM):
Dominant Worldview and Other Worldview Content/Elements:
Light moral worldview where self-awareness eventually overcomes lead character’s conceit, selfishness and misguided pursuit of fame and fortune rather than excellence, and there’s a positive Anglican priest character, and the lead character prays twice in movie’s first half, but otherwise Christianity has no effect on the rest of the plot, plus two men visit a native Maori community center in New Zealand to hear some traditional Maori music, and there appear to be some displays of pagan religious figures and symbols
Foul Language:
15 obscenities (including at least one “f” word), four strong Jesus profanities, one GD profanity, and one or two possible “f” words that were hard to hear and determine for certain
Violence:
A punch is thrown, lead character sets fire to another man’s motorcycle out of revenge but later makes things right, angry young man takes a small log and hits a campfire and the flames accidently burn up young woman’s backpack, and man discovers the insides of his van are trashed
Sex:
Light inuendoes about getting women in rap lyrics
Nudity:
Upper male nudity in several scenes (for example, men in native dress dance to music)
Alcohol Use:
Alcohol use and drunkenness in one scene as cheaters ply a man with liquor to defraud him out of more of his money
Smoking and/or Drug Use and Abuse:
Smoking and cheaters ply a man with pills to defraud him out of more of his money; and,
Miscellaneous Immorality:
Strong miscellaneous immorality overall includes white car driver almost hits bicyclist and driver calls him a racial epithet, and bicyclist calls him a “white trash yobbo” (yobbo is British slang for a lout or bully), uncontrolled anger, recording studio businessman defrauds lead character out of some money, lead character is thoughtless.

FIND YOUR VOICE is a comedy from Australia and New Zealand about a shallow young Maori man in Sydney trying to break into rap music because he wants money and fame, but he has no talent for it (though he has a beautiful singing voice), so he returns to New Zealand to reconnect to his ethnic roots and his family. Despite some funny, dramatic moments, FIND YOUR VOICE meanders too much, the lead character is unappealing, and there’s plenty of unnecessary foul language, so, despite its feel-good ending, watching the story play out feels like a waste of time.

The movie opens with a young Maori man in Sydney, Elvis “E” Peniaha, on his bicycle rushing to his work at a guitar shop owned by “Roadie,” a musician who’s spent years on the road with various musical acts. When E passes the Anglican church he attends, his pastor invites him to take part in choir practice, but E brushes him off, saying he has to work. However, he promises he’ll stop by next week. Before getting to the guitar shop, E stops off at a convenience store to check his lottery numbers. As the clerk checks the numbers, E prays to God for winning numbers, but the clerk soon informs him that there are no winning numbers on his lottery receipt.

After working a while at the guitar shop, E reminds Roadie he has to leave for an audition. Outside, two friends pick him up in their car, and they drive to the audition at a record company. At the audition, E and his friends perform a very bad rap song, complete with hokey break dancing moves.

Meanwhile, E gets a call from his aunt in New Zealand who raised him. She pleads with E to come visit, adding that his Uncle Willie is very sick and would like to see him. E blows her off, however.

A few days later, the secretary calls E to tell him the record company isn’t interested in signing his rap group. She tries to let him down easy, but E gets angry and rides his bike to the record company, where he barges into an executive meeting and chastises the company’s managers. E clearly thinks he’s the greatest thing in rap in years, but one of the men finally tells him that his rap music is terrible. He calls E “talentless” and “delusional.” The man is right, but E refuses to accept the truth.

Back at the guitar shop, E is still angry. He tells Roadie how great a rap artist he is, but Roadie agrees with the man at the record company. He adds, however, that he thinks E has a great singing voice; he’s just not a good rapper. Despite Roadie’s opinion about his singing voice, E gets extremely angry at him and quits his job.

Shortly thereafter, E visits the Anglican church and prays in the pews while the pastor leads the choir. The pastor is pleased to see E praying, but he’s concerned because E is clearly troubled.

E again visits the convenience store to check out his Lotto numbers. When the clerk tells E that he won the whole shebang, E at first doesn’t believe him, but the clerk is adamant. Just as the clerk’s earnest words start to reach E, Roadie walks into the store. E tells Roadie he thinks he just won the Lotto, but Roadie doesn’t believe him. The clerk assures them it’s true. Outside, Roadie celebrates with E, telling E that he’s now a bonafide millionaire.

Roadie and E make up with one another. E decides to use some of his lottery winnings to travel to New Zealand to visit his family and explore his Maori roots. He invites Roadie to come along, and Roadie agrees. In New Zealand, E buys a fancy van to drive to his aunt’s house. Before getting there, Roadie and E visit a Maori community center, where they hear some Maori folk singing. A young, beautiful Maori woman is one of the singers. E is clearly attracted to her, but she’s put off by E’s conceited attitude and swagger.

On the way to his aunt’s house, E and Roadie just happen to run into the woman, whose car has broken down at a road stop. E starts calling the woman, Princess. He offers her a ride. She agrees, so long as he can get her back to the big city, Auckland, by evening.

Things don’t go as planned, however. A series of comical disasters follow. E is responsible for some of the disasters. Also, he continues to pursue his misguided search for rap music fame and fortune.

Though it’s become clear by this time in the movie that E really does have an excellent singing voice, he’s not really interested in pursuing pop singing as a career. He thinks rap music is so popular that only becoming successful there can he achieve the fame and fortune he craves. Roadie tries to warn him, but E’s conceit leads him to spend lots of his Lotto winnings creating a rap record with a local recording studio. The man running the studio is only too happy to take E’s money, even though E has no idea what he’s doing. Not only that, E keeps stumbling over his rap lyrics, which are really, really bad. To ensure that E spends more and more of his money, the man and his studio crew ply E with alcohol and pills to keep him going and keep him spending his money.

FIND YOUR VOICE has some funny, touching moments, but the movie meanders too much. The premise doesn’t become clear until the movie’s second half. Also, the lead character is unappealing and annoying. When he falls for the female singer, he talks to her like he’s God’s gift to women, as well as God’s gift to rap music. He also seems rather dense and doesn’t really change until the very end. As a result, despite the movie’s feel-good ending, watching the story play out feels like a waste of time.

Content-wise, FIND YOUR VOICE has a light moral worldview where the lead character’s eventual self-awareness overcomes his conceit, selfishness and misguided pursuit of fame and fortune. However, it takes a series of disasters and a family tragedy to wake up this clueless young man.

Also, despite the two scenes showing the lead character praying, his prayers still seem strongly tinged with self-interest. In addition, the movie never follows up its Christian references in the movies second half. A good Christian screenwriter could take this story and develop a great, inspiring faith-based movie from it. In doing so, it would be a good idea to lighten the lead character’s flaws so that moviegoers could find a better reason to root for him to change his ways. For example, any person who’s watched a lot of movies and TV programs probably could think of a lead character who has huge flaws but still has at least one redeemable quality, like compassion or honesty. Though E reconciles with Roadie and invites him along to New Zealand, all expenses paid, this moment lasts so briefly in FIND YOUR VOICE that it doesn’t make much of an impact.