"Occult Horrors from a Devil-Worshipping Babysitter" 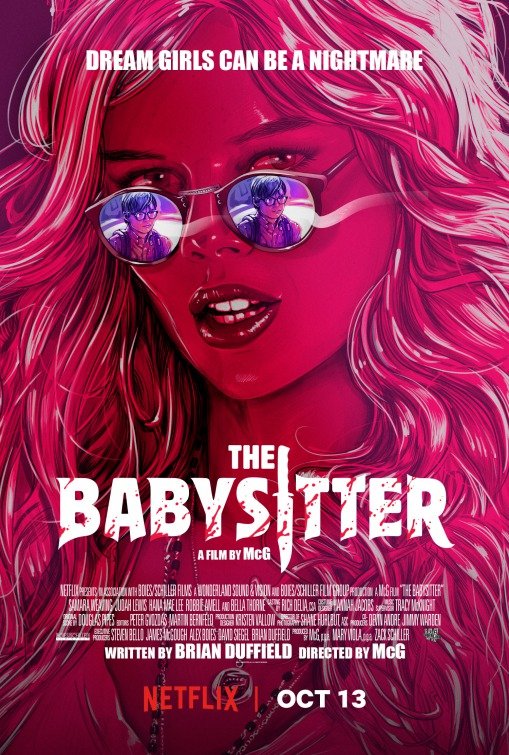 THE BABYSITTER is the first of two occult horror movies on Netflix. The story follows Cole, a 12-year-old boy whose parents are on a weekend getaway. Cole’s popular, hot babysitter Bee arrives. They spend a fun Friday night dancing, swimming and eating pizza. However, instead of going to bed when he’s supposed to do so, Cole stays up to discover what Bee does when he’s asleep. Cole catches Bee and her friends murdering someone in his living room in a ritual to the Devil. They come to get some of his blood to use in their ritual. Cole pretends to be asleep, but later Bee catches him trying to escape. Now, Cole has to find a way to stay alive as Bee and her friends try to kill him too.

The young actors in THE BABYSITTER play their parts well, but the rest of the movie isn’t so good. Also, the story’s plagued by strong, scary occult, pagan elements, mixed with constant foul language, strong lewd content and extreme violence. THE BABYSITTER has a light moral worldview, but the movie is otherwise abhorrent.

(B, PaPaPa, OO, C, H, PC, Co, Ho, LLL, VVV, SS, N, AA, DD, M):
Dominant Worldview and Other Worldview Content/Elements:
Light moral worldview about a 12-year-old boy fighting murderous Devil-worshipping teenagers shows villains killing and doing whatever they need to in order to complete an occult ritual of human sacrifice to the Devil to make their dreams come true, with some Christian elements (such as a comment about Jesus not needing directions to Heaven, how Jews have scrolls to guide them, and Christians have Bibles to guide them, but Devil worshippers have verses from the Devil to follow, a character makes the Sign of the Cross and prayer is mentioned as a way to defeat the demonic villains, but Christian, biblical means are abandoned after hero says he can overcome the demonic teenagers by himself), plus a politically correct comment mentions the communist group Black Lives Matter and some homosexual references in one scene
Foul Language:
92 obscenities, 15 profanities, strong name-calling, and some racial slurs
Violence:
Some extreme, strong and light violence with lots of blood throughout includes boy gets hit in head with basketball, boy pushes other boy around, girl keys a bully’s bike tire, boy seen using knife to fix a toy car, girls stabs boy with two knives in the head, two cops killed by rod through the eye and shot, girl shot in the heart, boy passes out, boy falls off landing over staircase and is stabbed through the next with a glass trophy during the fall, boy falls from window trying to escape murderous villains, boy traps girl and sets a firework off that blows up and kills her, boy is choked, boy hit in the face, house is egged, one character accidently hangs himself while falling from a tree house and dies, guns shot, things are thrown and smashed in a fight, girls head is shot off, character drives car into house to try and kill someone, and dead bodies seen
Sex:
Strong sexual content includes implied sexual stimulation under bed covers between a married couple, teenage girl kisses her friends (boys and girls) in game of truth or dare, mean and lewd jokes, comment about genitalia and conversation about hooking up with people, boy stares at female breasts, talks about sex, an orgy comment, and a teenage girl licks someone’s face
Nudity:
Upper male nudity while boy gets a shot, upper male nudity, and girl in a bikini while swimming, upper male nudity for no reason other than guy is ripped, female midriff shown twice
Alcohol Use:
Underage drinking, but no drunkenness, young boy offered a shot of alcohol and accepts it but only pretends to drink it
Smoking and/or Drug Use and Abuse:
No tobacco smoking, but there’s a comment smoking marijuana, and teenage babysitter tries to drug 12-year-old boy with a sleeping potion, but he only pretends to drink it; and,
Miscellaneous Immorality:
Boy lies and steals, but in an attempt to save himself from killers, movie has a bad father figure, teenage rebellion, and there’s a mention of parents being divorced.

THE BABYSITTER is the first of two occult horror movies on Netflix, where a 12-year-old boy has to escape his cold-blooded teenager babysitter after he catches her and her friends murdering someone for a ritual sacrifice to the Devil. The young actors in THE BABYSITTER play their parts well, but the movie is plagued by strong, scary occult, pagan elements mixed with constant foul language and lewd content and extreme violence.

The movie opens with Cole and his best friend, Melanie, waiting on rides home from school. Melanie’s dad comes to get her, but he refuses to take Cole home, so he walks. As Cole walks home, he’s approached by Jeremy, the school bully, and his buddies. Jeremy calls Cole names while pushing him.

Enter Bee, Cole’s older, good-looking, popular babysitter. Bee comes and gets Jeremy and his friends to leave Cole alone. Bee takes Cole home and jokingly tells him they will party on Friday night when she’s over to watch him.

Cole is kind of babied by his parents. So, when the weekend comes, and they’re set to spend yet another weekend away in a hotel, Cole is excited to hang out with Bee. The Friday she’s set to come, Melanie asks him what Bee does when he goes to sleep. Cole says he doesn’t know, and Melanie tells him to stay up that night and find out the answer.

Bee arrives at Cole’s house that afternoon just as his parents are leaving. They dance, swim and make pizza. Cole and Bee are really two peas in a pod as they also talk video games. The two of them have a great relationship.

When it’s time for Cole to go to bed, Bee offers to let him take a shot of alcohol to help him sleep like a baby. Cole says yes, but before taking it says Bee has to do it with him. While Bee leaves to get another shot, Cole secretly pours his out and just acts like he takes it. Bee comes back and takes her shot, and Cole heads to bed.

Just as Cole is about to turn the lights out, Bee checks on him. Bee eventually leaves, but, when Cole hears her friends come over, he jumps out of bed to spy on them so he can report back to Melanie. Bee and her five friends are sitting in the living room playing spin the bottle. Cole sees all the action when Bee is dared to kiss all her friends. However, when she gets to the last one, Bee stabs the guy in the head with two knives.

Cole freaks out and learns that Bee worships the Devil and got her friends in on her latest ritual. However, things turn south when Bee catches Cole trying to escape the house after spying on them. Now, Cole has to try to fight off Bee and her killer friends.

THE BABYSITTER is a sad excuse for a horror movie. The movie also tries to be comical, but fails at that. Instead, it’s plagued with lots of foul language, lewd content and extreme violence. The violence and most of the situations of how the characters die are pretty unbelievable. The movie features some well-known actors, and they play their parts well. If the script would have had much less crude content, maybe it could’ve been better.

Though THE BABYSITTER has a light moral worldview where a boy must survive some Devil-worshipping teenagers, it’s plagued by strong, scary occult, pagan elements. The teenage villains perform a ritual for the Devil to make their dreams come true. From there on out, they do whatever they want to get what they need or to save themselves. The young boy’s friend tries to help him and there are a couple light Christian references in THE BABYSITTER, but the movie is otherwise abhorrent.