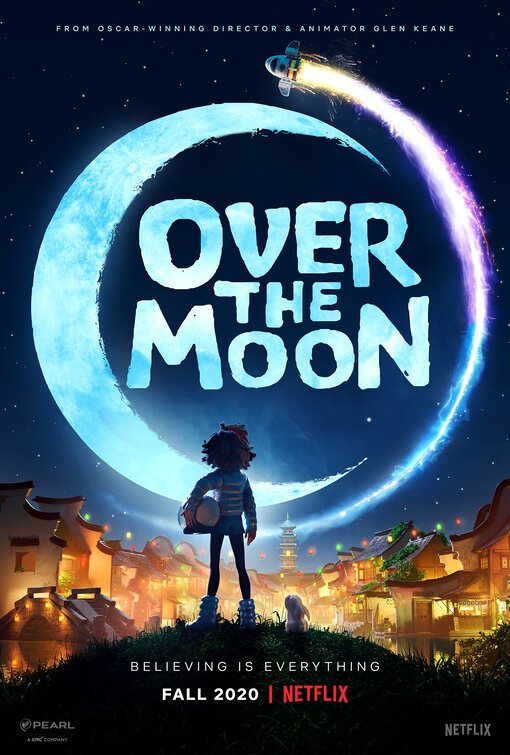 OVER THE MOON is an animated fantasy about a 12-year-old Chinese girl named Fei Fei. Before she dies unexpectedly, Fei Fei’s mother tells stories about a moon goddess from Chinese folklore. Four years after her mother’s death, her father starts dating another woman. Everyone writes off her mother’s story as a silly myth. Enraged that her father would forget her mother and her stories, the razor-sharp Fei Fei builds a rocket ship to prove the moon goddess exists. Fei Fei, her future stepbrother and her pet bunny find themselves on an adventure to a fantastic lunar kingdom full of strange, funny creatures.

OVER THE MOON is an endearing, beautifully animated musical about the healing power of family. The music, performances and animation work well together. Although there are heavier elements of sadness and loss, the movie balances it out with lighthearted animated fun. Eventually, Fei Fei learns to deal with her grief and love her new family. That said, OVER THE MOON contains some pagan Chinese mythology as a backdrop to its otherwise beautiful story of healing. So, MOVIEGUIDE® advises caution for children.

(PaPa, FR, BB, C, V, M):
Dominant Worldview and Other Worldview Content/Elements:
Strong pagan, mixed worldview includes a moon goddess, celebration of a moon goddess holiday, children go in search of the moon goddess even though stories about the goddess are dismissed as myth by adults, the pagan backdrop is used to highlight the lead female character’s imagination and love for her mother, with some strong moral elements such as characters learn valuable lessons of how to heal, deal with grief and love others, a strong emphasis on the healing power of family and love, plus some moral, redemptive themes such as sacrifice and forgiveness
Foul Language:
No foul language, but some brief name-calling
Violence:
Some light violence and jeopardy/death includes a young girl loses her mother to illness and struggles to overcome her grief, references to a scary place called the Chamber of Exquisite Sadness, stories about a goddess on the moon who fought off demons and took an immortality potion to await reunion with her loved one even though she doesn’t know he has already died on earth, a boy thinks he can run through walls but only runs into them, animated fantasy violence, rocket almost falls back to earth but instead crashes on the moon, and other moments of mild peril
Sex:
No sex
Nudity:
No nudity Alcohol Use/Abuse: No alcohol
Smoking and/or Drug Use and Abuse:
No smoking or drugs; and,
Miscellaneous Immorality:
Some brief verbal bullying.

OVER THE MOON is an American-Chinese animated musical fantasy that follows a 12-year-old girl’s adventure to a fantastic kingdom on the moon with her soon-to-be stepbrother, a pet bunny and a frog. OVER THE MOON is an endearing, beautifully animated musical about the healing power of family, but its fantastic story features a fabled moon goddess, so MOVIEGUIDE® advises caution for children.

The movie opens with a Chinese family as the mother tells her daughter, Fei Fei, a story about a moon goddess named Chang’e. As the mother sings, illustrations tell the Chinese legend of love and loss.

The family owns a business selling mooncakes, which they also make as a family. Fei Fei learns how to make the mooncakes and helps her mother sell them around their Chinese village. However, as the musical number grows somber, Fei Fei’s mother gets sick. Her parents get her a pet bunny as a gift, but her mother dies shortly after this. Fei Fei and her father mourn, but Fei Fei still honors her mother and remembers her stories and love for mooncakes.

The movie cuts to four years later. Fei Fei and her father are still running the business, and Fei Fei is excelling as a STEM student. While Fei Fei’s father has begun the healing process and is even dating another woman, Fei Fei has not recovered from her mother’s death. In fact, she feels betrayed by her father. Eventually, he brings the woman home to celebrate the Chinese Mid-Autumn Festival. His girlfriend has a young son named Chin, who takes on the annoying little brother role without Fei Fei’s consent. When her father, family and friends dismiss her mother’s stories as a silly myth, Fei Fei resolves to prove them wrong.

Fei Fei constructs a rocket to the moon. She builds the rocket and launches it into the sky. Everything is going according to plan, but suddenly she starts falling back through the atmosphere. She knows her calculations were correct but didn’t account for a stowaway, her future stepbrother, Chin. However, the rocketship still manages to crash land on the moon.

OVER THE MOON is an endearing, beautifully animated musical about the healing power of family. The music, performances and animation all work well together to show how Fei Fei learns to deal with her grief, embrace her new family, and learn to love. When Fei Fei and Chin first arrive in the moon’s fantasy realm, the moon goddess appears as a pop-star, which can be jarring. Although there are heavier sadness and loss elements, the movie balances it out with lots of lighthearted animated fun. Characters learn valuable lessons through their hardships and eventually respond with love. Sadly, OVER THE MOON contains pagan Chinese mythology as the backdrop to its otherwise beautiful story of healing. So, MOVIEGUIDE® advises caution for younger and older children.

Watch OVER THE MOON: