"The Price of Justice Is Everything" 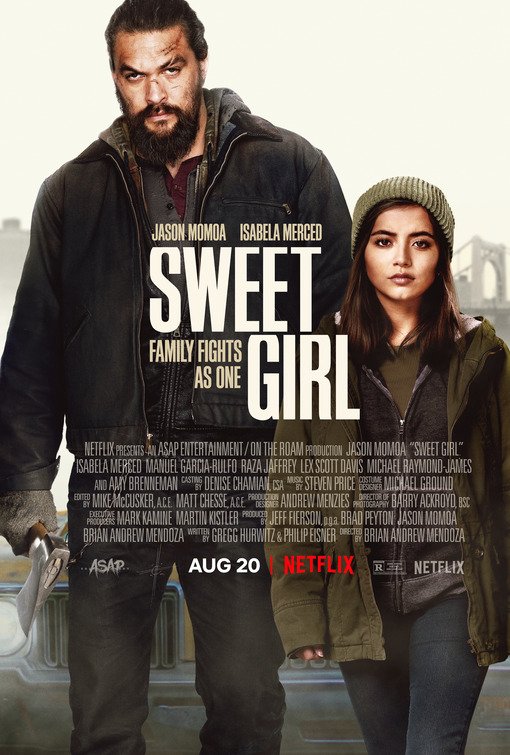 SWEET GIRL is a dramatic thriller on Netflix about a devoted family man who swears revenge on a pharmaceutical company that pulls a drug that could have saved his wife’s life. Left alone with his daughter and medical bills he can’t pay, Ray seeks justice. A journalist reveals he has proof the pharmaceutical company committed crimes. The journalist is killed in front of Ray and his daughter. This leads to several attempts on their lives because of the journalist’s information. On the run, the pair not only fight for justice; they also fight to stay alive.

SWEET GIRL is a very entertaining, soul-stirring drama wrapped in an exciting thriller. The movie is full of electrifying twists and turns, with some provocative philosophical questions. It has a strong Christian, moral worldview about a Christian family in distress, with references to God and the Cross of Christ and pro-family themes. Evil and greed are consistently rebuked, and the redemptive power of love is extolled. SWEET GIRL also contains intense violence and some strong foul language. So, MOVIEGUIDE® advises extreme caution for older teenagers and adults.

(CC, BB, PC, LL, VVV, MM):
Dominant Worldview and Other Worldview Content/Elements:
Strong Christian, moral worldview consistently measures the title character’s actions against the way in which she was raised to do the right thing, the Cross of Christ is prominently displayed in the home of the main characters, a lead character weeps and cries out to God in his distress, evil and greed are consistently rebuked, and strong family ties and bonds are combined with redeeming love, plus there’s some politically correct charged rhetoric that’s ultimately, however, rebuked by the story’s outcome
Foul Language:
Seven “f” words, two “s” words, a “b” word, and a GD profanity
Violence:
Some intense, extreme violence such as several violent fight scenes, man is shot in head, several stabbings, man smothered to death with a plastic bag, and woman held under water until she stops breathing
Sex:
No sex
Nudity:
No nudity
Alcohol Use:
No alcohol use
Smoking and/or Drug Use and Abuse:
No smoking or drugs; and,
Miscellaneous Immorality:
Strong miscellaneous immorality includes stealing, revenge, greed, envy, and some moral relativism.

SWEET GIRL is the head spinning, gripping, brilliant account of a devoted family man, Ray Cooper, who vows to get revenge when a pharmaceutical company pulls a cancer treatment drug that could save his wife’s life. The movie highlights the power of love, the importance of good family values and doing the right thing, contrasting these elements with the pursuit of justice, which at times is confused with revenge. SWEET GIRL explores some very deep philosophical questions with a light Christian and moral worldview. The movie is wrought with violence and a fair amount of foul language, so extreme caution is recommended for older teenagers and adults.

Ray Cooper is a loving, devoted husband and father. His wife lies in the hospital dying with cancer. He and his daughter, Rachel, are elated when they’re told that a pharmaceutical company named Bio Prime has released a life-saving, experimental drug. Before his wife can receive treatment, however, the drug is pulled. Ray threatens the company’s CEO on live television. He vows that, if his wife dies, he will hunt him down and kill him.

Ray’s wife soon dies, and Ray’s left almost destitute with medical bills he can’t afford to pay. He looks for answers. In a turn of events, a journalist seeks Ray out and informs him he has proof Bio Prime committed crimes, including payoffs to offshore accounts, bribes and corruption. When the journalist is murdered in front of Ray and Rachel, who follows Ray without permission, it sets off a series of violent murders.

Eventually, the murders are traced back to Ray due to the public threats he made. Ray and Rachel go on the run, dodging bullets at every turn. Conflicted, Rachel reaches out to a detective on the case, Sarah Meeker, to plead their case. Rachel asserts that she was raised by good parents and was always taught to do the right thing, but now they’re forced to kill their would-be assassins in self-defense.

How far do Ray and Rachel have to go to win justice, expose high-level criminal politicians, and get out of the mess they’re in now?

SWEET GIRL is a very entertaining movie with some great acting by Jason Momoa, who plays the father. The plot is full of electrifying turns, not to mention a mind-blowing twist that leaves viewers reeling. It is a soul-stirring drama wrapped in an exciting thriller, which keeps viewers engrossed, searching for answers. The movie combines great entertainment with great philosophical questions about good people forced into doing questionable things. The movie opens with the father’s narration, “As the years pass, life is nothing more than the experiences that made us.” Christians of course believe in redemption. We are not the sum of our mistakes or tragedies, but rather the sum of the love and saving power of Jesus Christ. There is nothing that can separate us from the love of God that is Jesus (Romans 8:37-39).

SWEET GIRL has a strong Christian, moral worldview that consistently measures the title character’s actions against the way in which she was raised to do the right thing. Her father weeps and cries out to God in his distress. The Cross of Christ is prominently displayed in their home. Also, evil and greed are consistently rebuked, and strong family ties and bonds are combined with redeeming love. There is, however, some politically correct charged rhetoric, but this content is ultimately rebuked by the story’s outcome. SWEET GIRL also contains intense violence and strong foul language. So, MOVIEGUIDE® advises extreme caution for older teenagers and adults.