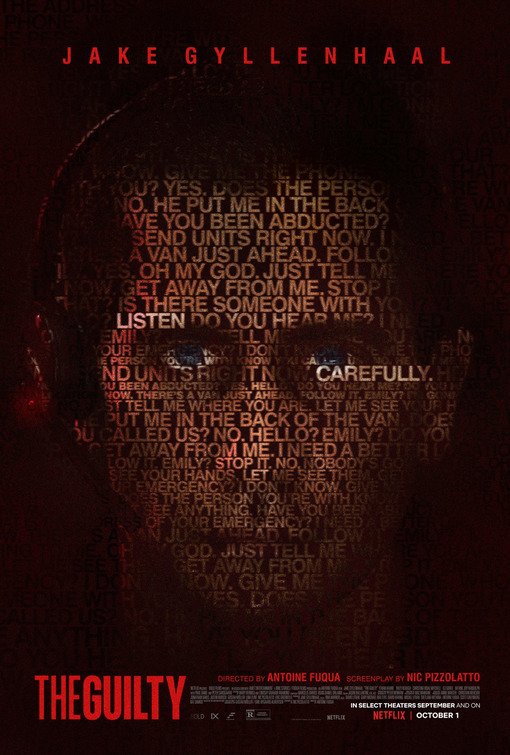 THE GUILTY is an high stakes thriller on Netflix. A 9-1-1 operator named Joe tries to aid a kidnapped woman, Emily, through the phone. Joe pieces together from another caller, that she’s Emily’s daughter, Abby, who’s alone in the family’s house with her brother. So, Joe is focused on trying to make sure that Emily and her children are safe from harm. Meanwhile, Joe’s own family and professional life are in disarray. Will Joe be able to see past his circumstances to lead this family to safety?

THE GUILTY is riveting. It has great production values, is very atmospheric and contains an excellent performance by Jake Gyllenhaal as Joe. The movie has a strong moral worldview with overt Christian elements. The opening shot displays John 8:32 about truth setting people free. The whole movie’s pursuit is to shine a light on the truth and to promote justice and love. There’s also some pro-family content about protecting and making time for people you love. However, THE GUILTY is marred by excessive foul language and disturbing, implied violence. So, MOVIEGUIDE® advises extreme caution.

(BB, CC, PP, Pa, LLL, VV, S, AA, DD, M):
Dominant Worldview and Other Worldview Content/Elements:
Strong moral worldview with strong Christian elements where the opening shot displays John 8:32 about the truth setting people free and the whole movie’s pursuit is to shine a light on the truth, plus justice and love are promoted, there’s some pro-family morality about protecting the ones you love and making time for them, truth ultimately wins out over lies, and the movie stresses confession and taking responsibility for one’s actions, plus there’s a strong positive attitude toward the police and their job of serving the public, mitigated by some pagan immorality
Foul Language:
83 obscenities (mostly “f” words), seven strong profanities involving Jesus, two GD profanities, 18 light profanities, and one scene of depicted vomiting
Violence:
Strong implied violence as all occurrences are recounted by characters or take place as a caller listens, a character mentions there’s blood on a little girl’s hands and shirt, there’s mention of a baby boy being cut up and murdered with blood on family members’ hands, instances where a character hits someone in an attempt to flee, an aggressive dog heard barking and gnashing its teeth, depictions of wildfires and explosions on the news, mention of a person having a knife on their person to be used for harm, and mention of shooting a teenager in cold blood
Sex:
No sex scenes, but man alludes to the fact he’s cheated on his wife
Nudity:
No nudity
Alcohol Use:
Coworkers mention they should grab a beer, character mentions he’s had two beers, and one 911 caller is drunk
Smoking and/or Drug Use and Abuse:
911 caller says he’s taken speed, and it’s clear he’s abused, and police recall a drug bust; and,
Miscellaneous Immorality:
Disrespect for authority, an alleged kidnapping incident occurs.

THE GUILTY is an intense, high stakes thriller on Netflix about a 9-1-1 operator who tries to aid a kidnapped woman and her daughter through the phone. THE GUILTY is riveting, with a strong moral worldview based on the Christian, biblical premise that the truth will set you free, but it’s marred by excessive foul language and disturbing violence.

Jake Gyllenhaal stars as Joe Baylor, who works for the 911 Communications Center for the Los Angeles Police Department. One night, raging wildfires affect the tri-county area. It’s clear that Joe is a cantankerous employee who seems to be off his game. Until, that is, Joe takes a call from a woman named Emily, who’s been kidnapped. Joe encourages Emily to talk to him as if he’s her child, so she can evade the suspicions of her captor. Sadly, though, they get disconnected.

Soon afterwards, a young girl named Abby calls. Joe pieces together that Abby is Emily’s daughter, and he begins to encourage Abby the best he can from afar. Apparently, though, Abby and her brother Oliver are home alone, and their father is the man who took Emily.

Joe doesn’t always stay on the phone with Abby or Emily, even though his thoughts are clearly on the gravity of their situation, not on other callers. At one point, Joe makes a call to his estranged wife so he can speak to his own daughter, but she declines his request since the girl is asleep. Viewers pick up from various conversations that Joe has with fellow police personnel that he’s on some type of probation, instead of in the field, which explains why he’s at the call center and why he’s distant from his family.

Although Joe is limited from what he can do to ensure Abby, Oliver and Emily’s safety, he loops in the Highway Patrol on the calls. Meanwhile, his partner outside the communications center is checking on things both on the road and at Emily’s residence. Will Joe’s limited perspective prevent him from leading Emily and her children to safety?

THE GUILTY has a great production quality and achieves its pursuit of a thriller-genre, even though most of the dialogue happens between characters through a phone. The music is eerie and helps the movie’s overall atmosphere. Jake Gyllenhaal plays his role to the letter, depicting a nice range of emotions for Joe Baylor so that viewers can identify with Joe’s quest for justice and truth.

THE GUILTY has a strong moral worldview with Christian elements. The opening shot displays John 8:32 about the truth setting one free, and the whole movie’s pursuit is to shine a light on the truth, along with promoting justice and love. Also, there are pro-family messages about protecting the ones you love and making time for them. Ultimately, the truth wins out over lies. There’s also an emphasis on confession, and how police officers are here to help the public. That said, there’s an excessive amount of strong foul language, including many “f” words and many profanities. THE GUILTY also has a strong amount of disturbing but implied violence. So, MOVIEGUIDE® advises extreme caution.