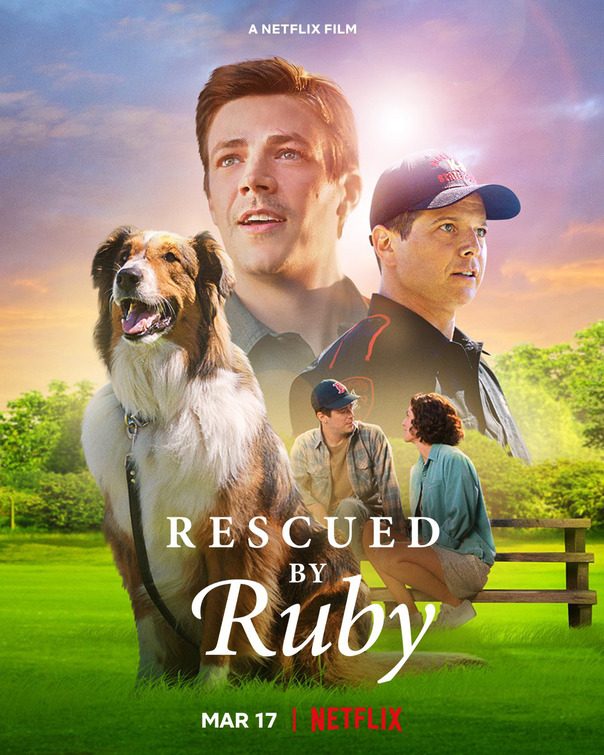 RESCUED BY RUBY is a comedy on Netflix based on a true story about an aspiring K9 officer who adopts a shelter dog named Ruby to help achieve his professional goals and provide for his growing family. Ruby is rambunctious and brings some stress to Danny’s family life. However, all she needs is some tender loving care. There’s an upcoming test to get into the K9 unit, though. So, Ruby and Danny have their work cut out for them. Will they be ready in time?

RESCUED BY RUBY is a terrific movie for the whole family. It has a strong moral worldview with some light Christian and Romantic elements. The story promotes providing for one’s family and protecting one’s community. It also extols having a good marriage. Finally, there are also positive comments about being close to God and about God’s Providence. However, the hero wants to follow his professional dream, though it’s rooted in his desire to do purposeful work and provide for his family. RESCUED BY RUBY is a heartwarming, engaging movie, but there is some jeopardy involving police work.

(BB, C, Ro, L, V, M):
Dominant Worldview and Other Worldview Content/Elements:
Strong moral worldview with some light Christian and Romantic elements, movie promotes providing for one’s family and adoption and protecting one’s community, the husband and wife have a good marriage where they communicate well and are supportive of one another, a character jokes, “the taller the hat the closer to God” and another says “that’s a wink from above” in a reference to God’s Providence, plus Romantic elements come into play as hero wants to follow his professional dream, but it’s rooted in his desire to do purposeful work and provide for his family
Foul Language:
One OMG profanity, one “h” obscenity, and two shut ups, man urinates in the yard to teach his dog how to do the same, implied and depicted dog urination, depicted dog poop, and a body bag is depicted coming out of a crime scene
Violence:
Dog playfully rips up pillows, and K9 team finds a missing boy in the woods, and he appears with some blood on his forehead and scratches
Sex:
No sex scenes or sexual immorality (a married couple kisses)
Nudity:
No nudity
Alcohol Use:
No alcohol use
Smoking and/or Drug Use and Abuse:
No smoking or drugs; and,
Miscellaneous Immorality:
Police officer jokes that the world would be better off without humans.

RESCUED BY RUBY is a comedy on Netflix based on a true story about an aspiring K9 officer and a shelter dog named Ruby who he adopts to help achieve his professional goals and provide for his growing family. RESCUED BY RUBY is a terrific, heartwarming movie for the whole family, with a strong moral worldview and some light Christian references to God, but there is some jeopardy involving police work.

The movie takes place in Warwick, Rhode Island. A dog named Ruby lives at an animal shelter and has for the last six months since she doesn’t have an adoptive family. Meanwhile, Daniel O’Neal is a state trooper who aspires to his dream of gaining a specialty in the K-9 unit. However, this marks Danny’s eighth attempt to qualify, and time is ticking since applicants have to be under 30 to apply, and Danny is 29.

While admiring the K9 unit in action, Danny meets Seamus Brady, a retired maintenance man for the police who seems to know a lot about the K9 program. Danny rushes off to get to work. At the shelter, the manager gives Ruby one day before the vet comes to put her down. In the manager’s mind, Ruby is unadoptable, but one of the shelter employees holds out hope.

According to the lead K9 officer, Matt Zarrella, Danny needs a German Shepard, which can cost up to $10,000 to try out for the K9 unit. He also thinks Danny’s temperament is all over the place and isn’t the right fit for the K9 unit.

After their conversation, Danny and his wife, Melissa, talk on the phone. She tells Danny she’s pregnant, and Danny is elated! In his mind, this opportunity will be positive for their growing family. Later, Seamus tells Danny off the record that he doesn’t actually need a German Shepard to try out for the K9 unit.

Danny goes to the local dog shelter and winds up adopting Ruby, who’s half Border Collie. Danny brings Ruby home to his family, his pregnant wife, Melissa, and their young son. Ruby is rambunctious and brings some stress to the family’s lives. Danny takes her to training school and all she does is run around, dig up the family garden and so much more. Melissa goes back and forth with Ruby, but ultimately tells Danny that Ruby is like him. Maybe all Ruby needs is routine and unconditional love?

The long-awaited tryout day comes, and Ruby does well up until the end. Zarrella again tells Danny he’s not cut out for this line of work. Danny leaves dejected until his wife brings up the idea of their similarities again. She notes that Danny worked hard to overcome learning struggles in school and maybe it would have been better if he had been homeschooled. Cue the lightbulb! With hope in their hearts, Danny and Melissa take to their backyard to train Ruby.

Despite not having made it into the class, Danny and Ruby show up for the final K9 test and are allowed to show off their skills. However, will Ruby and Danny buckle under pressure?

RESCUED BY RUBY is playful and family friendly. There’s a great balance between comedy and drama with very clear stakes for the characters. Also, filmmakers occasionally show sequences through Ruby’s perspective as a dog, which helps viewers quiet literally see through her eyes. The actors do a great job in their roles too, and the movie flows with ease without being too long. The scene transitions aren’t distracting, and the background music aids the onscreen action instead of taking away from it. The script also has some sweet light plot twists towards the end.

RESCUED BY RUBY has a strong moral worldview with some Christian and light Romantic elements. The themes of providing for one’s family, adoption and protecting one’s community are prominent. The husband and wife in the movie have a good marriage too where they communicate well and are a strong team. There’s also one comment where a character jokes, “The taller the hat the closer to God.” Light Romantic elements come into play as a character wants to follow his professional dream, but it’s rooted in a desire to provide for his family and do purposeful work. RESCUED BY RUBY is a terrific, heartwarming movie for the whole family, though there is some jeopardy involving police work.