ALL THE OLD KNIVES

"Suspenseful but Lewd, Woke and Depressing" 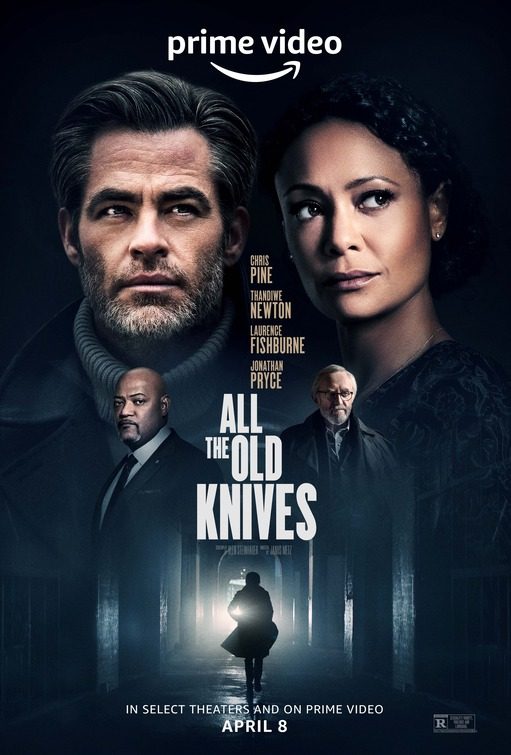 ALL THE OLD KNIVES is a modern day spy movie on Amazon Prime. It’s about a CIA agent named Henry Pelham who’s ordered to find out who helped some Muslim terrorists foil a rescue plan and kill a planeload of passengers in Vienna eight years ago. Henry’s boss orders him to investigate everyone in the office, including one man who later committed suicide. He’s also ordered to investigate his former lover, Celia, who worked with them at the time, and her former boss.

ALL THE OLD KNIVES is engrossing and suspenseful. However, it’s too woke. For example, it turns out that the Muslim man behind the terrorist hijacking and murders used to be a CIA informant but was betrayed to the Russians by CIA officials. So, the movie almost excuses the man’s turn to terrorist evil. ALL THE OLD KNIVES also contains more than 20 strong obscenities, three strong profanities and explicit bedroom scenes between the main CIA agent and his lover. The foul language, sex and nudity in ALL THE OLD KNIVES are clearly gratuitous and unnecessary. Ultimately, the story ends up being rather depressing.

(B, PCPC, APAP, FR, LLL, V, SS, NN, AA, D, M):
Dominant Worldview and Other Worldview Content/Elements:
Light moral worldview about finding and punishing a CIA traitor who helps some Muslim terrorists and hijackers foil a rescue attempt, marred by politically correct, Anti-American elements that blame the United States for the main Muslim terrorist’s actions and motivations, with some moral relativism
Foul Language:
24 obscenities (mostly “f” words), three Jesus profanities, three light profanities, and woman vomits
Violence:
Brief light violence includes character poisoned and blood oozes from the mouth, terrorists threaten to blow up passengers in hijacked plane, terrorists do that off screen, assassinations arranged and one carried out
Sex:
Depicted fornication in one scene and implied fornication in other scenes with a man and woman in and out of bed in two sequences
Nudity:
Upper and rear male and female nudity during sex scenes and upper and rear female nudity in other scenes related to the sex scenes
Alcohol Use:
Alcohol use and man appears slightly tipsy after drinking a lot of wine during a lengthy dinner
Smoking and/or Drug Use and Abuse:
Smoking but no drugs; and,
Miscellaneous Immorality:
Threats, extortion, lying, deceit.

ALL THE OLD KNIVES is a modern day spy movie on Amazon Prime about a CIA agent investigating whether a traitor in the CIA’s Vienna office helped Muslim terrorists blow up a plane full of airplane passengers eight years ago in Austria. ALL THE OLD KNIVES is engrossing and suspenseful, but it’s too woke, excuses some of the actions of the Muslim terrorists, and contains more than 25 obscenities and profanities and several flashbacks that include explicit bedroom scenes between the investigator and his former lover, who worked with him in the Vienna office and is also under his scrutiny.

The movie stars Chris Pine as CIA agent Henry Pelham, who’s ordered to investigate a terrorist bombing of a plane full of airplane passengers in Vienna, Austria eight years ago. The boss of the CIA office in Vienna, Vick Wallinger (played by Laurence Fishburne), orders the investigation. Vick was also the Vienna boss eight years ago, when a group of Muslim terrorists held the plane and its passengers hostage on the local airport’s tarmac. The terrorists eventually murdered the passengers and themselves when their demands weren’t met.

Vick tells Henry the CIA recently captured the Muslim mastermind behind the terrorist plot. The man told the CIA that his terrorists had help from a traitor within the CIA’s Vienna office. Vick orders Henry to investigate everyone in the office, including one man who later committed suicide. He’s also ordered to investigate his former lover, Celia Harrison (played by Thandiwe Newton), who worked with them at the time in Vienna, and her former boss, Bill Compton (played by Jonathan Pryce). Henry finds out that a mysterious phone call was placed from Bill’s phone, to which both he and Celia had access. However, Bill and Celia point out to Henry that anyone in the office easily could have gained access to that phone.

The movie’s second half involves a lengthy interview between Henry and Celia at a fancy restaurant in Carmel-by-the-Sea, where Celia lives with her husband and two children. The filmmakers create suspense in two ways here. First, they create suspense in flashbacks leading up to the deadline the terrorists set eight years ago. It becomes clear in these flashbacks that the movie is going to reveal who helped the terrorists. Secondly, they create suspense because what Celia doesn’t know is that Henry has lined up a CIA assassin who’s ready to kill Celia as soon as Henry gives him the word and she exits the restaurant.

ALL THE OLD KNIVES is engrossing and suspenseful. However, it’s too woke.

For example, it turns out that Henry knows the man behind the terrorists who hijacked the Turkish plane and flew it to Vienna. The man is a Muslim informant Henry used to keep a handle on Muslim terrorists in Chechnya when Henry was working in Moscow several years before being stationed in Vienna. Henry personally promised the man never to betray him, but he has to break his promise when his CIA bosses order him to do just that so they can make an important deal for information with the Russians, who had details about an impending attack on an American embassy. The Russians tortured the man and his daughter, but then released them to Iran. Sadly, the man’s daughter died in Iran because they couldn’t get important medical treatment because of U.S. sanctions against Iran. So, now her father has become radicalized and is out to exact revenge against the West.

This subplot blames the United States and almost excuses the Muslim terrorist plot to hijack the plane and threaten the passengers’ lives. Also, it should be noted that American sanctions against the Muslim terrorist extremists controlling Iran haven’t affected medical supplies to Iran until the last three years, not back in 2012 when the terrorists hijacked the plane in this movie.

ALL THE OLD KNIVES contains about 27 strong obscenities and profanities. In addition, the flashbacks to Henry and Celia’s love affair in 2012 has several explicit bedroom scenes with explicit nudity. The movie’s foul language, sex and nudity are clearly gratuitous and unnecessary.

Finally, although the traitor is eventually exposed and dealt with, the story is rather depressing, because viewers are told from the start that an attempt to rescue the passengers was foiled and the Muslim terrorists ended up killing all of them. That said, ALL THE OLD KNIVES clearly shows that the Muslim terrorists are killing the passengers in the name of Allah. Of course, Muslims have been murdering, enslaving and oppressing Non-Muslims for centuries, beginning with Mohammed.