"Depressing Look into the Making of I LOVE LUCY" 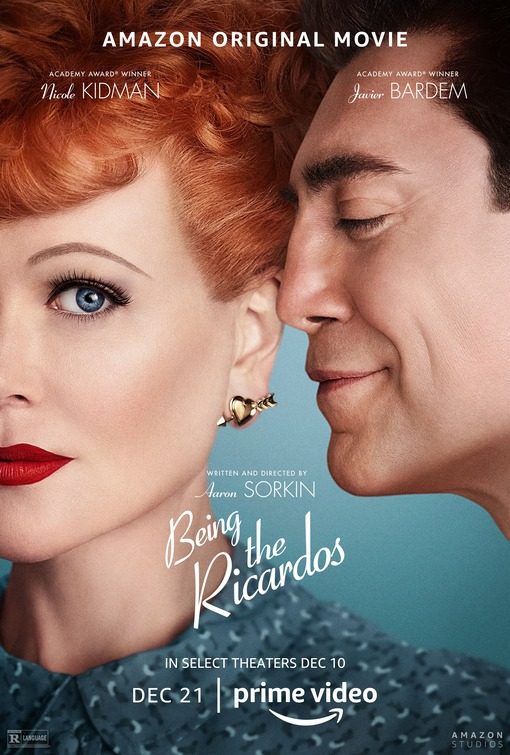 BEING THE RICARDOS follows Lucille Ball and Desi Arnaz and the production of the I LOVE LUCY television show. Lucy has been accused of being a communist, while Desi has been accused of being unfaithful in their marriage. When the sponsors and network are worried the show will not continue because of the accusations, the team must find a plan to reach the audience even through the midst of trails. Tensions are high, everyone has some sort of problem, and there’s very little happiness being on the set of I LOVE LUCY.

(RoRo, Co, AC, LLL, SS, N, AA, D, M):
Dominant Worldview and Other Worldview Content/Elements:
Strong Romantic worldview with very little repercussions for actions, communism is supported in dialogue, but then refuted by another cast member
Foul Language:
21 obscenities (including 13 “f” words and 10 strong profanities using Jesus and GD
Violence:
No violence
Sex:
Sex between a married couple, and sex between unmarried couple, plus adulterous affair mentioned
Nudity:
Characters take off clothing, and underwear shown
Alcohol Use:
Drinking and implied drunkenness
Smoking and/or Drug Use and Abuse:
Smoking, but no drugs; and,
Miscellaneous Immorality:
Lying and deceit.

Lucille Ball and her husband Desi has created an extremely successful show in I Love Lucy, but now Lucy has been outed as a Communist. Along with this news, the news of Desi’ affair has also come up in the press. Lucy doesn’t think she can trust Desi, and Desi wants to protect Lucy. Lucy says that she did indeed check the box saying she was a communist, but this was years ago, and it was in support of her family member who was a communist. The movie then makes a case for communism, but Desi refutes that, saying his family’s home was taken by the communist party in Cuba.

Lucy is mostly concerned with that fact that Desi is thought to have had an affair. Desi of course denies this, but Lucy can’t get it out of her head. The show must go on, and we watch as the cast does a table read, rehearsal, rewrites, and arguments. Tensions are high and it seems as if every cast member and everyone working on the show, has some sort of problem, leading to very little joy and happiness of being on the set of I LOVE LUCY.

To add to everything, Lucy finds out she’s pregnant, and she wants to show the world, and the pregnancy will be included in I Love Lucy. At the time, this was a big deal as a pregnant woman was typically not shown on TV. Making matters worse, the sponsors are thinking of pulling support for the show, if they show the pregnancy.

Will Lucy get off the hook for supposedly being communist? Did Desi cheat on Lucy and is their marriage on the brink? Will Lucy be able to show that she’s pregnant on TV?

BEING THE RICARDOS is a dramatic, dialogue filled movie. The movie is all dialogue with very little action. In fact, the movie feels much like a theater production. Nicole Kidman doesn’t have the twinkle or charm that Lucille Ball had. For a movie based on a beloved TV comedy, I LOVE LUCY, there is little to no laughter in this movie. The question is, why do modern Hollywood movies, Oscar praised movies, about the lives of these actors in the 50’s and 60’s often try to reveal the negative and hopelessness of these people in the spotlight. We can’t just appreciate the work that they did with their roles. We have to see into their deepest darkest fears and burdens that weighed them down. For us at MOVIEGUIDE® ,we prefer the IT’S A WONDERFUL LIFE movies, the movies that show the hardships, but that also show problems, hardships and obstacles can be overcome by redemption and hope in the future.

BEING THE RICARDOS has a Romantic worldview. Despite her denials, Lucille Ball makes a point for communism, but Desi Arnez makes a point for the American Dream. Each character in the movie is following their own desire, and there are little repercussions for their actions. Despite a pro-life comment, there’s very little to commend about BEING THE RICARDOS, and audiences that loved I LOVE LUCY won’t feel the same way about this movie.

Watch BEING THE RICARDOS: