"The Rise of Two Television Icons" 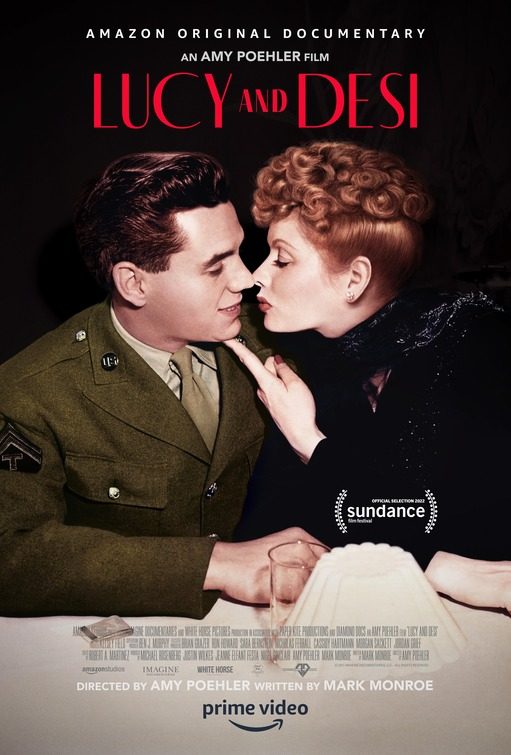 LUCY AND DESI is a front row seat on Amazon Prime into the rise and fall of TV sitcom icon Lucille Ball and her husband, Desi Arnaz. Featuring stories from their children, friends and producers who knew them best, viewers get an inside scoop into the highs and lows of both their lives. The documentary tells an incredible story of how they grew from poor starving artists to filming a TV pilot and owning the biggest independent entertainment company.

LUCY AND DESI does a great job helping viewers see the world from Lucy and Desi’s eyes. Audio tapes and interviews from the two stars make it seem like Lucy and Desi are telling their own story. The movie’s overarching worldview is Romantic, featuring a whirlwind romance and two people chasing their dreams despite the cost. This drives home a message that attaining wealth and fame is the biggest ideal one can achieve. That said, LUCY AND DESI has little objectionable content and takes a strong pro-marriage stance. Despite their divorce, their daughter, Lucie Arnaz, said they still felt an “unconditional love” toward each another.

(RoRo, B, Co, C, L, V, A, D, M):
Dominant Worldview and Other Worldview Content/Elements:
Strong Romantic worldview of attaining love despite the cost, living for oneself and doing what makes you happy even if it compromises your morals, mitigated by a pro-marriage message and a depiction of ongoing unconditional love between a married couple despite a divorce, plus movie discusses a controversy when Lucille Ball was accused of being a communist and references to Lucy’s Catholic mother
Foul Language:
One “a” word
Violence:
Light violence including a couple of scenes of physical violence in a situation comedy; one description of a boy being shot
Sex:
No sex scenes or sexual immorality, but brief scenes of two people kissing
Nudity:
No explicit nudity but there’s an exposed pregnant belly and a woman’s cleavage is exposed
Alcohol Use:
Several scenes of two adults drinking (not rebuked)
Smoking and/or Drug Use and Abuse:
Several scenes of smoking one scene of cigarettes being marketed on television;
Miscellaneous Immorality:
Light miscellaneous immorality such as divorce.

In LUCY AND DESI, their daughter, Lucie Arnaz Luckinbell releases secrets about Lucy and Desi’s lives documented on twenty audio tapes that Lucy and Desi recorded themselves about their lives, their love and show business. Lucie, their daughter, says, “underneath it all was deep, unconditional love.” This is what the documentary does its best to portray.

The movie starts off in Hollywood in 1953, at the height of Lucy and Desi’s career. Stars of the I LOVE LUCY, the biggest television hit at the time, and ranked among the wealthiest couples, Lucy and Desi seemed to have it all. Celebrities such as Bette Midler and Carol Burnett chime in on the couple’s ability to use all different forms of comedy.

Raised by her grandfather, Lucy used to go to Vaudeville shows every Saturday with her father, and that is what sparked her love for acting and comedy. Coming to New York in 1928, she got odd jobs, but amounted to nothing. She made her initial career in modeling. She then took an internship working with Lela Rogers, a talent manager, who taught her daughter, Ginger Rogers, and Katherine Hepburn simultaneously.

Desi dreamed of fame as well. He started in Miami in a band called The Siboney Septet. Xavier Cugat, a Spanish musician and bandleader nicknamed, “the King of Rhumba,” discovered Desi and took him under his wing, teaching him how to play Latin music. Desi met Lucy for the first time in a movie called TOO MANY GIRLS. It was a whirlwind romance, and they married six months later. However, they struggled. Because it was an interracial marriage, many people didn’t want them to be together. Desi also had to care for his mother soon after they wed.

As Desi rose to fame, Lucy did as well. She was dubbed “Queen of the Bs,” meaning Queen of the B pictures. Lucy wanted to highlight her comical talent, so she branched out into radio. On the helm of television as a new form of media, Lucy and Desi’s first television appearance was on THE ED WYNN SHOW in 1949, where they adapted their radio show on television. Desi, going on tour with his band, took Lucy with him, and she joined him on stage.

Suddenly, however, Lucy became pregnant, but tried to keep it private. Walter Winchell, a popular gossip columnist, spread the news, only to have Lucy lose the baby soon afterwards. On the heels of success on stage, CBS brainstormed a pilot for I LOVE LUCY. When they shot the pilot, Lucy was pregnant with her first child, Lucie. At the end of the first season, Lucy was pregnant again. Having their son at the same time the episode aired that Lucy had a baby on the show, it began the rerun model known in television today.

Controversy followed when the government exposed Lucy as having communist leanings. Cleared of the charges, their careers continued to skyrocket, with Desi and Lucy becoming a producer of television shows, creating Desilu Studios. No matter how successful Desi became, however, Lucy was always portrayed as the bigger star. This strained their marriage, eventually leading to divorce.

The overarching worldview is Romantic with the idea that chasing your dreams no matter the cost is the biggest ideal to achieve in life. There is no Christian worldview present, and God is only mentioned once in reference to Lucy’s mother who was Catholic and superstitions.

The cinematography is gorgeous, interspersing black and white film and pictures with colored photos. Using real audio tapes from Desi and Lucy, it makes the audience feel as though Lucy and Desi are still alive. These scenes are often shot with the voices of family members, celebrities who were inspired by their presence in movies and television, and producers in the business. LUCY AND DESI is a high-quality documentary packed with information about Lucy and Desi, careful to give equal attention to both the highs and lows of their lives.

The movie is clean, with only one light obscenity and no other objectionable content. LUCY AND DESI has a strong pro-marriage stance. Despite their divorce, their daughter, Lucie Arnaz, says they still felt an “unconditional love” toward one another.