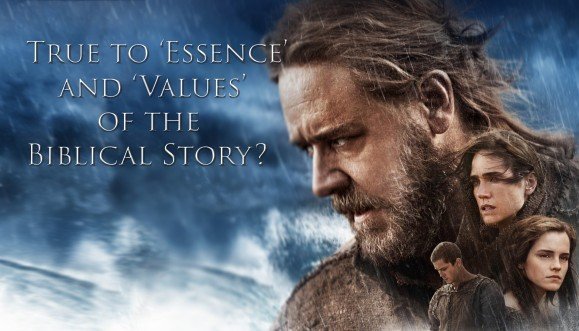 Paramount Pictures has added a disclaimer in their promotional materials for their new movie, NOAH, based on the famous biblical story, at the request of some Christian leaders.

The disclaimer admits some “artistic license” has been taken with regard to the story, but that the movie is “true to the essence, values, and integrity of a story that is a cornerstone of faith for millions of people worldwide.”

The disclaimer also adds, “The biblical story of Noah can be found in the book of Genesis.”

The disclaimer is being added at a suggestion coming from a panel on the movie NOAH at the recent National Religious Broadcasters (NRB) convention in Nashville last week. The panel, led by President and CEO of the NRB, Dr. Jerry Johnson, discussed NOAH’s positive qualities and its departures from the Bible.

Johnson concluded the event by requesting Paramount add an appropriate disclaimer to the movie that would show respect for the original biblical text, as DreamWorks did in 1997 when it released the animated epic THE PRINCE OF EGYPT, which was about Moses and the Exodus.

Paramount Pictures Vice Chairman Rob Moore said, “We are deeply appreciative of Dr. Johnson’s efforts to bring this idea to us, our goal has been to take every measure we can to ensure moviegoers have the information they need before deciding to buy a ticket to see the film. We are very proud of Darren Aronofsky’s NOAH. We think audiences all over the world will enjoy this epic film.”

Dr. Ted Baehr, chairman of NRB’s new Film Committee and founder and publisher of MOVIEGUIDE®:  The Family Guide to Movies and Entertainment, was a major advisor to DreamWorks on THE PRINCE OF EGYPT.

“Now more than ever, Hollywood understands Christians want entertainment that lifts up their values and encourages their faith,” he said, noting that there are about 2.38 billion Christians in the world, more than 238 million of them in the United States.

“This is the biggest demographic for NOAH.” Baehr pointed out. “Every Christian should be pleased that Paramount has decided to honor the biblical text in this way. The disclaimer should help NOAH find the audience it needs to succeed.”

NOAH opens wide on March 28. Readers can check back later in March for the full MOVIEGUIDE® review of NOAH.

Author of THE CULTURE-WISE FAMILY and HOW TO SUCCEED IN HOLLYWOOD (WITHOUT LOSING YOUR SOUL), Dr. Baehr was a producer of CBS-TV’s animated feature THE LION, THE WITCH, AND THE WARDROBE, which won an Emmy Award and was seen by more than 37 million viewers in the United States in 1979.