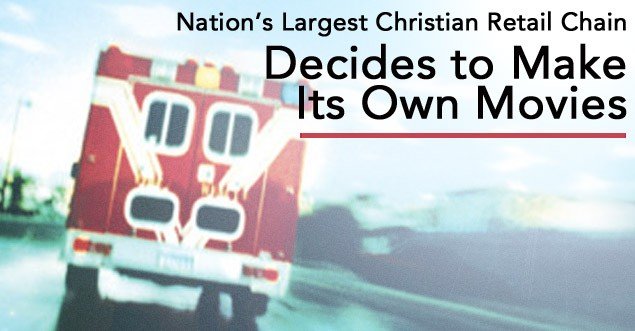 With Christian entrepreneur Rick Jackson at the helm, the company will produce two movies per year, beginning with the movie adaptation of Don Piper’s bestselling book, 90 MINUTES IN HEAVEN.

The movie, based on the Baptist pastor’s true story about going to and returning from heaven after dying in a terrible car accident, has been scripted and will be directed by Michael Polish (THE ASTRONAUT FARMER). Hayden Christensen (STAR WARS:  REVENGE OF THE SITH) and Kate Bosworth (SUPERMAN RETURNS) will star.

Jackson said he’s been a passive financier in six faith-based movies, but made the decision to create his own sister company with Family Christian Stores when he realized that, while wholesome movies do sell well (for example, the Family Christian chain sold $4 million worth of THE BLIND SIDE DVDs), there is still a need to produce more, and more with higher quality.

“In production, in quality, budgets and professionalism, the Christian and family markets are maturing, and we’re upping the ante again,” Jackson said.

He adds that Family Christian Entertainment is open for receiving ideas from a variety of sources, from developing original scripts to ideas that come in the door.

“One of the problems I saw with Family Christian Stores [when] I first got into it,” Jackson said, “was that it did not have any original content. Our performance and profitability was based on if THE BLIND SIDE or GOD’S NOT DEAD or other movies came out. So our focus was, where is our opportunity? The idea is to have our own content. . . .  We want to make more money to give away more money.”

On the subject of giving away money, a business decision that is undoubtedly rare in Hollywood, Jackson said that profits from FCE movies, including 90 MINUTES IN HEAVEN, will be donated entirely to charity.

Jackson said Family Christian Entertainment will specifically cater to Christian audiences and that he hopes that one-day it will be on par with Walt Disney Pictures.

“We are not on a mission to teach Hollywood a lesson,” Jackson told the Christian Post. “I don’t care about that. What I am interested in doing is speaking to this audience in professional way and create a platform; we’d almost like to be the Disney of this space.”

“It’s more than just a movie,” Jackson said about the movie version of 90 MINUTES IN HEAVEN. “It’s a real modern day biblical story, and I think it’s a story that Christians are gonna attach to and really like.”

90 MINUTES IN HEAVEN will start shooting in Atlanta later this month.