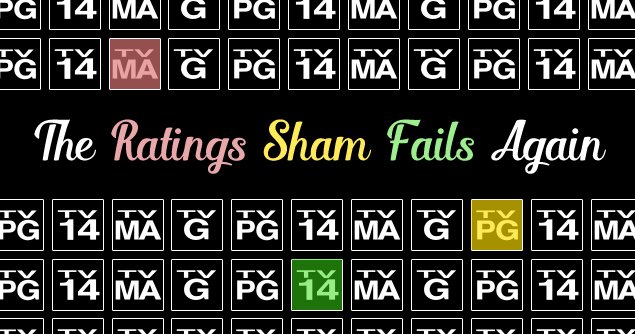 Our friends at the Parents Television Council (PTC) do great work exposing the bad on television and even commending the good. We commend them.

They just released a 20-year examination of the effectiveness of the TV content ratings system. Their conclusion is that the ratings have failed and, instead of protecting children, protect Hollywood’s salacious content.

In this massive and well-researched study, PTC shows that the number of primetime appropriate for all audiences “TV-G” programs has decreased from 27 hours in a two week period in 1997 to Zero hours in 2014. It also shows that, from 1997 to 2014, there was a 38 percent decrease in the number of hours networks aired TV-PG programming. Finally, the study shows that the amount and intensity of obscene, sexual and violent programming has increased dramatically.

This is a fascinating study that deserves to be read.

However, as we have pointed out for many, many years, since the late 1980s, the ratings system itself is the cause of the problem.

The rating system can’t be fixed. Why? Because a ratings system will always give Hollywood a license to insert toxic content into more and more of their movies and television programs.

Instead, Hollywood, including the television networks and cable outlets, needs to return to objective standards.

It’s important to note that the TV ratings system, just like the movie ratings system that started in the late 1960s, has marked the death knell of network or broadcast television. For example, the Number One rated show in 1998, SEINFELD, averaged slightly more than 38 million viewers, but the Number One rated show last season, THE BIG BANG THEORY, averaged slightly more than 19 million viewers, a drop of 50 percent.