‘The Cos’ Returns to Network TV 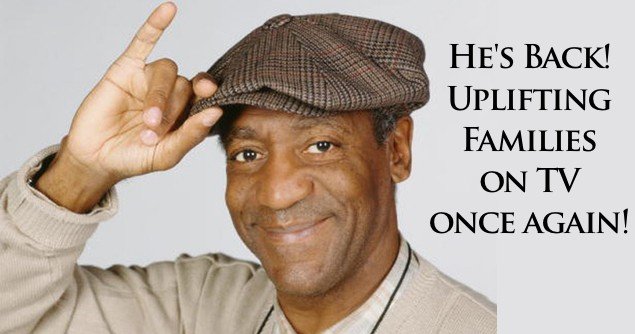 ‘The Cos’ Returns to Network TV

When I was little, I couldn’t wait to sit down in front of my television set on Thursday evenings. With my bowl of popcorn nearby, I’d munch away and laugh at the antics of iconic TV characters such as the educated and witty Huxtable family on THE COSBY SHOW and the loveable political leanings of everyone’s favorite Republican, Alex P. Keaton on FAMILY TIES. It was funny, smart, and, most of all, family friendly.

Today, however, I struggle to give my family those same memories. Most network producers use suggestive dialogue, over the top violence, and gratuitous sex scenes to spice up their plots. Instead of bonding over the laughter of our favorite TV show, I cover my children’s eyes and send them to bed before the last round of Wheel of Fortune.

I want more. I want programming that makes my face red with laughter, not flushed with embarrassment. I bet there are others who want that, too. Perhaps, the TV networks are finally understanding.

Bill Cosby, patriarch of the long-running series hit THE COSBY SHOW, is teaming up with Producer Carsey Werner to deliver more appropriate programming to the small screen, for NBC, which used to be the king of the sitcom during the 1980s and 90s.

“I want to be able to deliver a wonderful show to network,” Cosby told The Hollywood Reporter, “because there is a viewership out there that wants to see comedy, and warmth, and love, and surprise, and cleverness, without going into the party attitude. They would like to see a married couple that acts like they love each other, warts and all, children who respect the parenting, and the comedy of people who make mistakes. Warmth and forgiveness. So, I hope to get that opportunity, and I will deliver the best of Cosby, and that will be a series, I assume, that we could get enough people week after week after week to tune in to, to come along with us.”

Some producers have started to embrace this trend. Shows like THE MIDDLE on ABC and THE MICHAEL J. FOX SHOW on NBC both portray families that, despite their dysfunction, respect each other, love each other, and learn a life lesson or two along the way. These are the type of shows Cosby wants to see a resurgence of, and if he can pull off another ratings winner, he may just get it.

With the addition of a new family-friendly Cosby sitcom as the leader of their Thursday night lineup, NBC may successfully recreate the nostalgia of 1980s television and turn their ratings slump into a ratings victory.