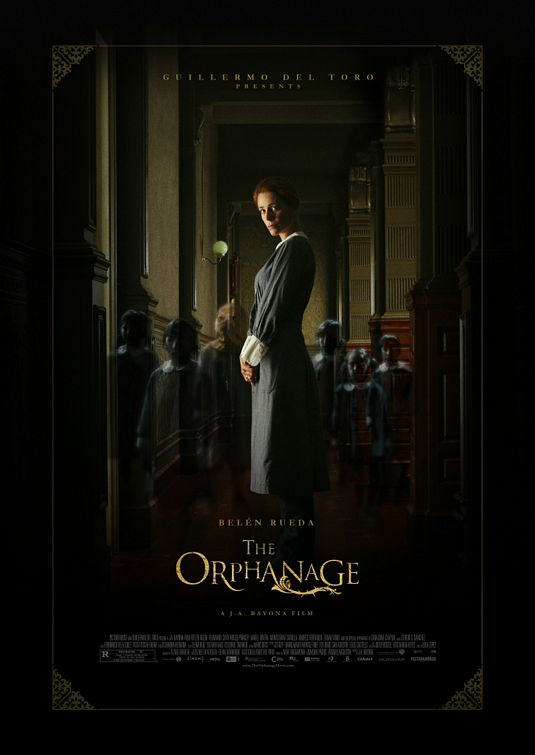 THE ORPHANAGE is a Spanish language horror movie about a woman, Laura, who moves her family back to the orphanage home where she was raised. When her adopted son, Simón, begins to talk with new invisible friends, Laura becomes concerned. Then, when a vengeful spirit takes her son, Laura and her husband bring in a team of psychics. She realizes that the orphan friends she grew up with may have never left the house alive. Now, Laura must play all of the ghosts’ games if she wants to see her son again.

THE ORPHANAGE uses some rehashed, retread, and worn-down horror movie devices. Although it uses these devices well and there is plenty of nail-biting moments, this movie is still nothing original. It’s almost as if the writer and director sat down with a checklist to make sure that they used all the ghost story clichés they could remember. THE ORPHANAGE also has a very strong pagan worldview with strong occult content. Thus, a woman psychic tries to communicate with the dead, which is forbidden by the Bible. THE ORPHANAGE also contains strong scary violence, but it’s not very graphic.

(PaPaPa, OO, Ab, H, C, B, L, VV, DD, MM,) Very strong pagan worldview takes place in haunted house with vengeful ghosts, poltergeist spirits and strong occult elements as couple brings psychic team in to contact spirits through regression ritual, psychic woman communicates with the dead, pagan view of the afterlife, humanist elements as Jung’s psychoanalytical studies are quoted, some Christian and biblical elements as prayer is depicted in two scenes, some Catholic elements as man gives a St. Anthony medallion to his wife for protection and a crucifix is seen in the background in one scene; three obscenities and no profanities; strong violence and disturbing imagery includes woman gets pushed by ghost, her fingers get smashed in a doorway, woman slaps her son, woman falls and breaks her leg, another woman is hit by car and killed, a deformed child is seen, ghosts are heard screaming, woman finds skeletons in bags, and, ghosts slam doors, move objects, etc.; no sex; no nudity but female cleavage shown; no alcohol; woman overdoses on pills; and, woman trespasses, some deceit, woman commits suicide, and woman chooses her relationship with her son over her relationship with her husband.

THE ORPHANAGE is a Spanish language horror movie about a woman, Laura, who moves her family back to the orphanage home where she was raised years earlier. When her adopted son, Simón, begins to talk with new invisible friends, though, Laura realizes that the orphan friends she grew up with may have never left the house alive.

Playing in a cave near the orphanage house, Laura’s son Simón meets an invisible friend, Tómas. When Simón invites Tómas home with him, strange occurrences begin. Then, Simón tells Laura that Tómas wants to play a game where he will take something valuable, and Laura and Simón must find it. Finding valuable items mysteriously missing throughout the house, Laura believes that her adopted son Simón is simply taking his imaginary friend games too far. That is, until the vengeful spirit of Tómas wants to play the game only with Laura so that Simón is the valuable thing that goes missing.

For many months, Laura and her husband Carlos search for Simón but to no avail. Carlos believes that Simón is dead, but Laura knows that Tómas has taken him. Bringing in a team of psychics, Laura learns that Tómas is not the only ghostly spirit in the old orphanage. She learns that the spirits of all of her playmates from childhood, all of whom had been brutally murdered in the orphanage, still lurk about. Now, Laura must play all of their games if she ever wants to see her son again.

THE ORPHANAGE uses some of the same rehashed, retread, and worn-down pagan, horror, movie devices. Although it uses these devices well and there is plenty of tension and nail-biting moments, this movie is still nothing original. It’s almost as if the writer and director sat down with a checklist to make sure that they had an abandoned old building, creaking wood floors, doors that close by themselves, a child with extra sensory perception, a creepy old woman, a character who is seen as crazy by her unbelieving family members, sequences with deadpan children standing in shadows, psychic visions, and all the other things that go bump in the night.

Most disturbing to people of faith and values, though, is the spiritual content of this movie, especially the sequence with the team of psychics that go through stages of regression in an occult ritual in order to find out what horrors have occurred in the old home. As the lead psychic journeys through the house, she hears the screams of the children who were murdered there years before. She speaks to the dead children, and they answer her. This is a clear violation of the Lord’s mandate in scripture to avoid communication with the dead.

Although not brutally violent like most modern horror movies, THE ORPHANAGE is still an excessive, blatantly pagan movie with strong occult elements that directly violate the Word of God. MOVIEGUIDE® advises that all audiences, not just culture-wise people of faith and values, would be well served to spend their time and their money on other more worthwhile movies. For a list of morally uplifting and enjoyable movies, please go to www.movieguide.org.