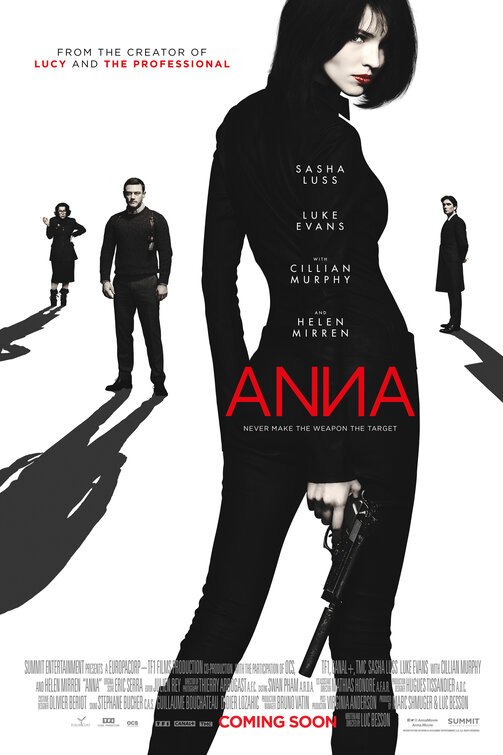 ANNA opens with a drug-addicted female teenager stuck in an abusive relationship. When she gets caught up in her boyfriend’s violent crime spree, the KGB intercepts her. They train her to be a lethal assassin then send her out on missions. She lives as an undercover high fashion model. After three years, she becomes weary from killing for the KGB and wants to be free. When she realizes that the KGB intends for her to be an assassin for life, she plots her escape. A CIA agent, Alex, offers Anna freedom in exchange for murdering the head of the KGB. Anna sets out to win her freedom and make sure she’s in control of her own destiny.

ANNA is all over the place. The movie lacks any sense of a moral compass. Anna and her cohorts rob, destroy and kill. In fact, Anna becomes even worse than her abusive boyfriend at the beginning. Despite some exciting action scenes and a few touching moments, ANNA is a poorly written movie with an overdone story. It contains excessive foul language, gruesome violence and illicit bedroom scenes.

(PaPaPa, P, B, HoHo, LLL, VVV, SSS, NN, A, DD, MM):
Dominant Worldview and Other Worldview Content/Elements:
Very strong pagan worldview with little sense of values, but woman tries to win her freedom from the KGB, though the freedom she seeks is not well defined, woman has a mother-daughter relationship with a superior, plus some strong, overt homosexual content
Foul Language:
At least 57 obscenities (mostly “f” words) and several profanities
Violence:
Very strong and strong violence scenes of murder, gunfights, martial arts fighting, stabbings, bludgeoning with a fork, and a borderline rape scene
Sex:
Very strong sexual content overall includes several semi-graphic carnal sex scenes with partial nudity, bisexual title character, homosexual sex, brief sex scene with multiple partners, and brief sex-related dialogue
Nudity:
Upper female nudity, partial sexual nudity, upper male nudity
Alcohol Use:
Three party scenes with alcohol use
Smoking and/or Drug Use and Abuse:
Party scenes with characters smoking, and movie opens with title character as a drug addict, but it’s portrayed in a negative light; and,
Miscellaneous Immorality:
Absolutely no remorse or moral culpability by the main character, or any other character.

ANNA is a troubling spy thriller about a young woman who’s both a victim and deadly assassin. A victim turned killer for the KGB, Anna learns to enjoy killing or at least has no qualms about it. However, Anna grows restless when she realizes the KGB won’t give her the freedom they promised her after five years. So, she takes the matter of winning her freedom into her own hands.

The movie opens up with a drug addicted Anna being humiliated and abused by her live-in boyfriend. After he practically rapes her, he forces her to go along on his crime spree. At this point, Anna seems to be deeply concerned about the violence committed against an elderly tourist for his cash. The robbery leads to a shootout in the streets. Anna and her boyfriend decide to flee. The KGB intercepts her and kills her boyfriend. She agrees to work for the KGB if they set her free after five years.

The audience doesn’t see how or where Anna is trained, but after a year of “spy” training, Anna is completely desensitized to violence and murder. Her first test assignment leads her to commit a gruesome bloodbath in a local restaurant. The scene is complete when she jumps on her victim and bludgeons him with a fork. Passing the test, she’s sent to live as an undercover fashion model in Paris.

Flash forward three years, and Anna is told she will be an assassin for life. The CIA captures Anna during one of her assignments at a time when she happens to be looking for an exit from the KGB. The CIA offers her an exchange of her assassin services for the promise of her freedom. All she has to do is murder the head of the KGB. Experience has taught Anna to trust no one. While she accepts the deal from the CIA, she secures her own type of insurance so that neither the KGB nor CIA will take her freedom again.

Though Anna sets out to win her freedom, the movie never really discloses what this “freedom” looks like to her. Anna lies, steals, uses people for sexual gratification, and commits countless murders in cold blood. However, the only objection she has to her lifestyle as an assassin is her concern that her living accommodations aren’t good enough. Her character shifts from emotionless to rage to well-mannered and endearing (though not believable) at will. The movie never shows viewers who the real Anna is. For example, at one moment she appears to be heterosexual with real feelings for her KGB boyfriend, Alex. That’s why it’s perplexing when she has no problem having intimate relations with her lesbian girlfriend. Later on in the story, she has sexual escapades with the CIA agent.

There are some exciting scenes of suspense and action in ANNA. Also, the title character has some touching “mother/daughter” moments with her KGB boss Olga, played by Helen Mirren. The concept of freedom in general is extolled, but Anna’s idea of freedom without a purpose fails to give adequate character motivation. The movie jumps back and forth in time, which makes it tiresome and at times very confusing. Anna’s physical strength is completely unbelievable, as she is gauntly thin and undernourished. Nevertheless, she’s shown “taking out” an entire room full of large men, more than once. Also, Anna is depicted mostly as an emotionless, robotic killer. She lacks passion, which is why it’s hard to explain how the movie’s peppered with sex scenes from out of nowhere. These bursts of carnal passion come across as a writer’s pornographic fantasy rather than a part of Anna’s character.

ANNA is a poorly written movie with an overdone story. With the exceptions of some good filming, exciting action scenes and a few touching moments, the movie lacks direction, motivation and any sense of values. It’s also fraught with foul language, gruesome violence and illicit sex scenes. ANNA contains excessive objectionable content.