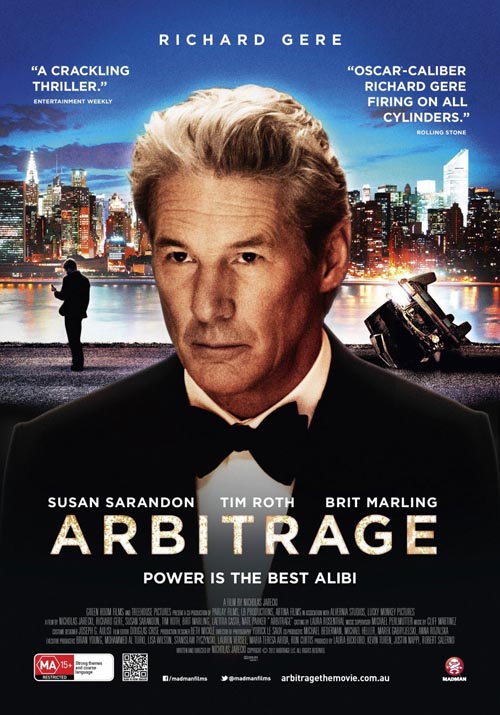 ARBITRAGE is a captivating morality tale. Richard Gere stars as 60-year-old Wall Street financier Robert Miller. Robert has made a bad bet in the market. Worse, he’s trying to hide his losses so he can sell his company to another wealthy man. If anyone, especially the potential buyer, finds out, Robert and his family will lose everything. Meanwhile, Robert also is covering up his affair with a younger woman. While driving her to a secluded getaway, he accidentally crashes the car and she dies. Now, Robert also has to hide his part in the crash because that could crash the deal. How far will Robert go?

ARBITRAGE is a morality play, not a political attack on Wall Street. It’s more like a suspenseful character study with sobering thoughts on moral corruption. The acting in ARBITRAGE is excellent. Richard Gere gives one of his best performances. That said, ARBITRAGE contains lots of strong foul language. The sexual content isn’t explicit, but it’s still designed for older audiences. Overall, therefore, MOVIEGUIDE® advises extreme caution.

(BB, PaPa, LLL, VV, S, A, D, MM) Strong moral worldview in what becomes a morality tale where the protagonist commits wrongdoing but gets his comeuppance in a clever, profound way, marred by strong pagan use of foul language in dialogue; 86 obscenities (mostly “f” words), seven strong profanities, four light profanities; violent car crash, dead victim has deep gash on her neck because of it, man has cut on scalp; implied adulterous fornication in one or two scenes and man is about to take mistress to a secluded hideaway; no nudity; alcohol use; smoking; and, lying, cheating, manipulation, policeman cheats and manipulates evidence, and protagonist puts others at risk of jail, including his own daughter.

ARBITRAGE is a captivating morality tale about a hedge-fund magnate in over his head, who suddenly has to deal with a personal tragedy. The movie is suspenseful and absorbing, but it does have some strong adult content so extreme caution is advised.

The movie opens with Wall Street financier Robert Miller celebrating his 60th birthday with his wife and family. Both his daughter and his son work for him at his hedge fund company, but it’s the daughter who has the brains, so she’s handling the company books.

What she and the other family members don’t know, however, is that Robert has made a bad bet in the market. Making matters worse, he’s trying to hide his losses from everyone so he can sell his company to another wealthy man. If the man learns about the closes, which are being covered by a huge loan from a friend, he won’t buy the company, and Robert will go bankrupt, or worse, being charged for criminal activity by the feds.

Robert is also covering up his affair with a much younger woman. As is natural for these kinds of things, the other woman is upset that Robert never has enough time for her and keeps putting off a divorce.

Later that evening, Robert soothes her feelings by offering her a whole weekend at a secluded hideaway they’ve used before. On the way there, a terrible accident occurs, the woman dies in a vicious car wreck, and Robert covers up the fact he was driving the car. He uses the son of a long-dead African-American associate to pick him up and get out of Dodge, so to speak.

Will Robert be able to evade exposure of all his irresponsible decisions? How far will he go?

ARBITRAGE is more of a morality play than an attack on capitalism. In fact, when Robert bluffs the other guy into buying his company at the price Robert wants and needs, the movie makes it easy to root for Robert. Thus, there’s some moral ambiguity in the script that allows viewers to take part in Robert’s world, but at the same time, delight when Robert finally gets his comeuppance. In that sense, ARBITRAGE isn’t some propaganda piece about Wall Street, but it is a sober look at the corruption that sometimes takes over the lives of those in high finance.

It helps that the acting in ARBITRAGE is excellent. Richard Gere gives one of his best performances as the charming and compassionate, but deeply flawed lead character. First-time director Nicholas Jarecki (who also wrote the script) is clearly a new talent to watch.