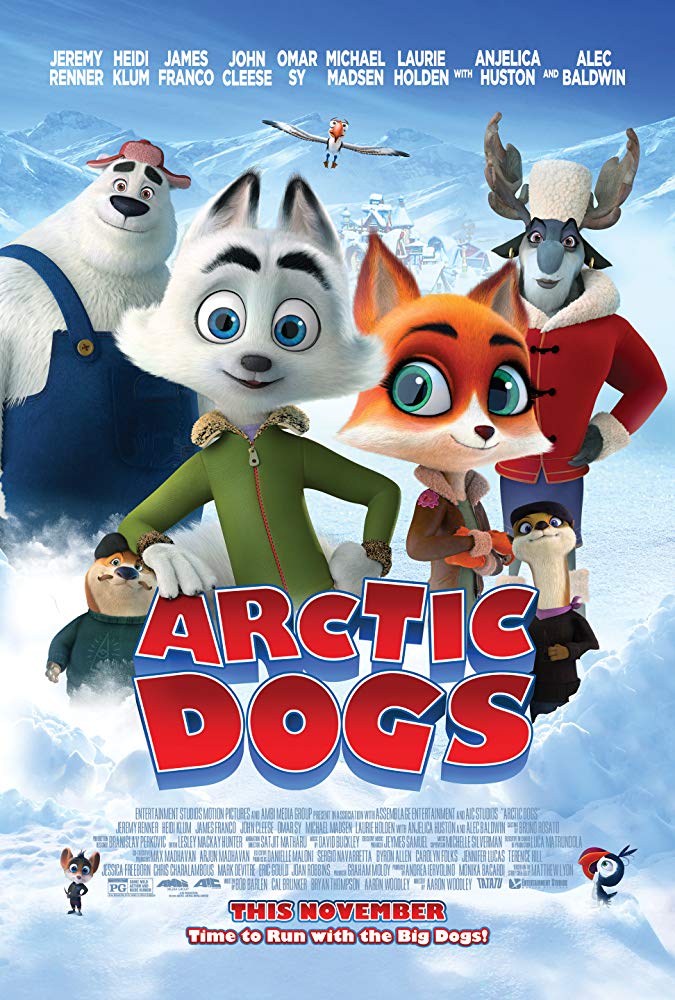 ARCTIC DOGS is a cute animated movie about a little white fox named Swifty, who dreams of growing up to be a “Top Sled Dog” at the local Arctic Blast Delivery Service. His idols are three large huskies who are the current heroic Top Dogs. Everybody tells Swifty he can’t become a Top Dog because he’s “just a fox” and only dogs can deliver things. Undaunted, Swifty works hard but becomes discouraged when he gets a bad review that tags him as only “extremely adequate.” Instead of giving up, Swifty takes matters into his own hands but uncovers a global warming plot to destroy the town.

ARCTIC DOGS is a playful, funny movie with whimsical, eccentric characters. It has a strong moral, redemptive worldview with positive messages about being your true self, sacrifice, helping others, teamwork, supportive friendships, and working hard toward your dreams, even if the odds are against you. These positive elements in ARCTIC DOGS are tarnished, however, by some politically correct, environmentalist messages about global warming, some brief rude humor and scary moments. So, caution is advised for some children.

(BB, C, PCPC, EE, Ro, Cap, V, M):
Dominant Worldview and Other Worldview Content/Elements:
Solid moral worldview on the importance of supportive friendships, helping others and togetherness, with redemptive elements of sacrifice, mitigated by strong politically correct, environmentalist elements about a global warming conspiracy, gas drilling and an intentional effort to wreck the earth, with some Romantic elements about pursuing personal dreams, but some capitalist elements about a delivery service and working hard to get ahead
Foul Language:
No foul language, but some mild rude humor
Violence:
Action related peril, which involves guns and an explosion
Sex:
No sex
Nudity:
No real nudity, but the fox is seen in his “underwear” and there are a few jokes about “streaking”
Alcohol Use:
No alcohol use
Smoking and/or Drug Use and Abuse:
No smoking or drugs; and,
Miscellaneous Immorality:
Movie contains an overt message that there is a global warming crisis, which could be scary and cause anxiety in some children.

ARCTIC DOGS is tale about a sweet white fox in the Arctic named Swifty, who literally blends in with his snow-covered background. Swifty idolizes the three Top Sled Dogs at the local Arctic Blast Delivery Service (ABDS), who make all the deliveries. The little fox doesn’t realize he’s completely ignored by his idols and continues to hold them high on a pedestal. He dreams of growing up to be a Top Dog mail courier himself. The problem is that deliveries are only made by husky dogs. To complicate matters further, Swifty is tiny and lacks the physical strength to pull a sleigh.

Swifty grows up and secures a job in the assembly line at ABDS, under the management of a caribou named Magda. After several (dog) years, Swifty becomes discouraged when Magda informs him he will never become a Top Dog. No matter how hard he tries, he receives reviews from Magda that he is only “competently sufficient” or “extremely adequate.”

Swifty gets some good news when his childhood sweetheart, Jade, moves back to town. However, he can’t seem to connect to his foxy friend Jade, because he is not able to be himself. In a desperate attempt to impress her, and also realize his lifelong dream, Swifty, takes an old sled without permission and delivers one of Jade’s packages.

Upon delivery to a “Mr. Occu Pant,” Swifty stumbles on the evil Otto Von Walrus and his band of cute little villains, the puffins. After a successful delivery, Swifty returns to a very angry boss. Magda fires Swifty for breaking the rules and lying. His dreams are crushed, and he becomes the laughing stock of the town. Two French-speaking otters, referred to as “la resistance,” capture Swifty in order to interrogate him about Otto Von Walrus.

Meanwhile, Otto Von Walrus feels threatened he’ll be discovered, so he sends out his villainous assistants, the puffins, to capture the Top Dogs. The whole Arctic town is up in arms without the delivery service. Swifty convinces his ex-boss to give him another chance to prove he can take over the deliveries. He becomes the town hero after a successful day of being a Top Dog delivery fox. However, he also uncovers that Otto Von Walrus is building an enormous machine, with Jade’s unknowing assistance, in order to drill underneath their town eight miles down for “Bad Gas.”

Swifty overlooks the evil plot for a bit as he basks in his lifelong dream of being a celebrated Top Dog. The town begins to melt and flood due to rising temperatures. Otto Von Walrus kidnaps Jade to force her to work faster on his drilling machine. In an attempt to rescue Jade and stop Otto’s evil plans, Swifty employs the help of PB, his nervous friend, Lemmy, a bird who cannot fly, Leopold, Bertha, Magda, and the Otters. The entire zany band of friends get put in jail. They will end up in boiling waters if they don’t devise an escape plan that works.

ARCTIC DOGS is a playful movie with some whimsical, eccentric characters. It has some very good messages about being your true self, teamwork, helping others, and working hard toward your dreams, even if the odds are stacked against you. There are also some nice messages about the importance of friendship. Eventually, Swifty must risk his own life to save everybody.

That said, the story is scattered with what seems to be a politically correct sermon on a supposed climate crisis with villains intentionally trying to heat up the earth and destroy it. There’s also some mild rude humor and scary elements in ARCTIC DOGS. So, some caution is advised for children. The message that there’s a global warming crisis could be scary and cause anxiety in some sensitive children.