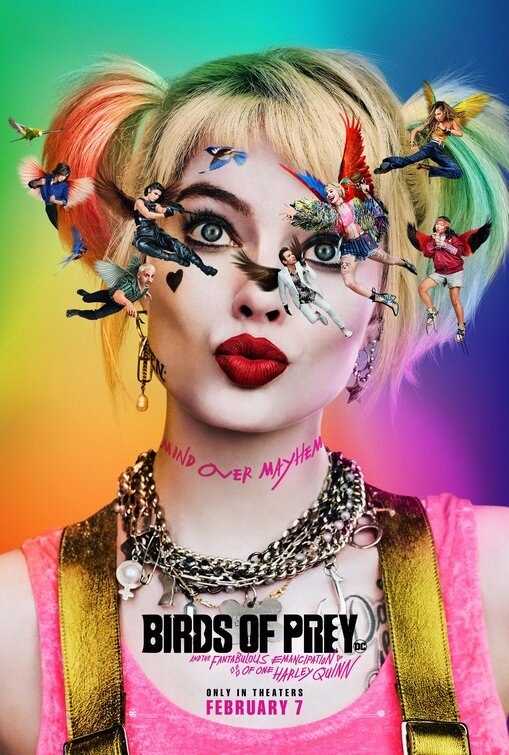 BIRDS OF PREY is a violent, satirical thriller about the former lover of the Joker, a female criminal named Harley Quinn. When the criminal world of Gotham City learns Harley has broken up with Joker and is no longer under his protection, the people Harley’s wronged try to kill her. The Black Mask, an evil gangster trying to take over the city, captures her, but she makes a deal with him to let her live, in exchange for finding a super-valuable diamond. The trail leads to a teenage pickpocket who stole the diamond from the Black Mask’s henchman, but the police have arrested the pickpocket.

Margot Robbie does a entertaining job as Harley Quinn, as does Ewan McGregor, who plays the crazed Black Mask. The script is laced with lots of humor and action. However, BIRDS OF PREY has abundant foul language and constant violence. In addition, some of the violence is extreme. BIRDS OF PREY is fairly entertaining, but the foul language is decidedly excessive, the plot is a little convoluted, and the story needs a more uplifting and positive foundation.

(HH, FeFe, B, LLL, VVV, S, NN, AA, DD, MM):
Dominant Worldview and Other Worldview Content/Elements:
Strong humanist, feminist, satirical worldview set in a dark criminal, film noir world where goodness and justice are hard to find, but not impossible, including all the men in the story are no good and a female detective’s male boss is a bad guy who intentionally deprives her of the promotions she clearly deserves
Foul Language:
At least 128 obscenities, three strong profanities, one light profanity, one obscene gesture, and a thief swallows a valuable diamond so there’s a couple brief comments about retrieving the diamond, including cutting it out of her digestive system or giving her some laxatives or prune juice
Violence:
Some very strong violence, and lots of strong violence includes gangsters assassinate another gangster and his family, one young teenage girl survives the carnage and then trains to get revenge, female antihero using baseball bat against assailants breaks one henchman’s legs, female antihero breaks another man’s legs by leaping on them after he rudely insults her at a bar, many fight scenes involve leaping and punching and kicking with many groin shots, female anti-hero shoots shotgun shells filled with colored glitter and colored smoke at police to knock them down and free a prisoner she wants, car and motorcycle chase scene where the woman driving the motorcycle has her friend on roller skates hanging onto the motorcycle to catch the main villain racing down the street in his car with a teenage girl he’s kidnapped, it’s implied that evil gangster has his henchman cut off the faces of three victims, woman shoots arrows from a crossbow to kill and stop bad guys, man’s head busts through a car window, explosions, violent threats, and female antihero has a scary-looking large hyena as a pet
Sex:
Brief references to female antihero being the girlfriend of a notorious male villain and gangster gets mad at a female customer in his bar and starts to order her to take off her clothes, but nothing else shown except for the top corner of her bra
Nudity:
Gangster has drawings of two topless women in his office, and some female cleavage is shown several times in movie
Alcohol Use:
Alcohol use and people appear drunk in several scenes
Smoking and/or Drug Use and Abuse:
No smoking but female antihero finds some cocaine packages in a police station and throws them at some would-be assailants (this scene is meant to generate a couple laughs); and,
Miscellaneous Immorality:
Vengeance, revenge, betrayal, female vigilante kills the men who murdered her family, stealing, female antihero says, “You make me want to be less terrible,” and female antihero says people should never pay their taxes.

BIRDS OF PREY is a violent, satirical thriller about the former lover of the Joker, a female criminal named Harley Quinn. Harley becomes the target of an evil gangster and must bargain her way out of the mess that involves finding a diamond having information leading to a vast hidden fortune.

The movie stars Margot Robbie as Harley Quinn, the Mad Maid of Mischief. Narrated by Harley, the story opens with Harley unable to convince anyone she broke up with the Joker. So, she blows up their favorite rendezvous place, the Ace Chemical Plant. The explosion draws the attention of female detective Renee Montoya, who was passed over for promotion when her male partner stole the credit for solving a big crime. Also, however, without the Joker’s protection, Harley now becomes the target for every person in Gotham City that she ever wronged. One of the angry victims is a vicious gangster named Roman Sionis, aka the Black Mask.

Roman is trying to take over all the organized crime in the city, but he needs more funding. A diamond owned by another gangster, who’s now dead, has secret information embedded within it that reveals the location of the dead gangster’s vast hidden fortune. Happily for Roman, his righthand man, Victor, has found the diamond. Unhappily for Roman, a talented teenage pickpocket named Cassandra took the diamond from Victor’s pocket and is now sitting in a police station.

When Victor captures Harley and brings her to Roman for elimination, Harley overhears them talking about the diamond. She makes a deal with Roman to let her live, in exchange for giving her a chance to bring in Cassandra and the diamond. If she fails to get the diamond him, he can kill her then, she tells him. Roman agrees, but when Harley leaves to get the girl, he puts a $500,000 bounty on Cassandra and the diamond to give Harley some “incentive.” So, Harley must now compete with every bounty hunter in town.

Margot Robbie does a spirited, entertaining job as Harley Quinn, as does Ewan McGregor, who plays the crazed gangster Black Mask. The script is laced with lots of humor and action. However, BIRDS OF PREY also has abundant foul language and constant violence. Some of the violence is extreme and includes things like breaking people’s legs and an assassination massacre of a gangster’s family.

BIRDS OF PREY is also set in a dark criminal world. As a character, Harley Quinn has few moral scruples and pays little attention to laws and social norms. However, she befriends the young pickpocket and apologizes to her when she wrongs her. “You make me want to be a less terrible person,” she says in one of the movie’s biggest laughs. Of course, Harley’s character is set in the world of the Batman comic books and Gotham City, a world that’s usually been darker than other superhero comic books.

Strangely, the title BIRDS OF PREY doesn’t really refer to Harley Quinn at all. That title belongs to a group of female heroes who fight crime in Gotham City. In the DC comic book world, the female heroes include Barbara, the daughter of Police Commissioner Jim Gordon, Batman’s friend, a character named the Huntress, and the Black Canary, a longtime DC Comics female hero identified with a woman, Dinah Drake, and her daughter, Laurel Lance. In the iteration here, Harley Quinn must team up with Detective Montoya, Dinah Lance aka the Black Canary and the Huntress when the Black Mask and his henchmen trap them and wants to kill them all the women for helping the teenage pickpocket, Cassandra. A short epilogue narrated by Harley Quinn reveals that Montoya, the Black Canary and the Huntress will form a crime-fighting group named Birds of Prey.

Of all the female characters in this movie, Harley Quinn is definitely the best developed. The other female characters seem a little too under-developed. Also, the Black Mask’s henchman, Victor, is not very well developed either. The movie suffers a little bit because of this. MOVIEGUIDE® doesn’t think, therefore, that BIRDS OF PREY will have as strong a fan base as other DC Comics-inspired entertainment such as the recent WONDER WOMAN movie or the GOTHAM TV series, which excelled at creating well-rounded versions for many iconic comic book characters. For example, in the GOTHAM series, Anthony Carrigan made a more menacing and more formidable, not to mention super creepy, Victor.

All in all, though, BIRDS OF PREY is fairly entertaining, but the foul language is decidedly excessive, the plot is a little convoluted, and the story needs a more uplifting and positive foundation.