BLINDED BY THE LIGHT

"Inspiring Story of Self-Discovery and Reconciliation" 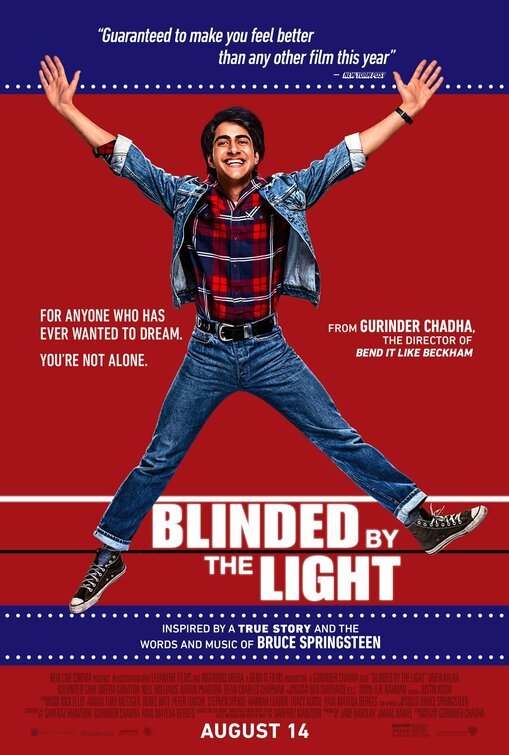 BLINDED BY THE LIGHT is a spirited musical comedy, set in 1987 England. It’s filled with a celebration of American rock icon Bruce Springsteen’s early music. Javed, a 16-year-old Pakistani immigrant growing up in a London suburb, is upset by his father’s strict vision of Javed’s future. Javed’s father wants Javed to become a lawyer or an accountant, but Javed loves to write. His junior college writing teacher encourages Javed’s writing. When a new college friend introduces Javed to the joys of Springsteen’s music, Javed is inspired to pursue his own path. Clashes with his father become inevitable.

BLINDED BY THE LIGHT is an infectious, heartwarming movie, with several fun musical numbers involving Springsteen’s inspiring early music. Eventually, the father and son reconcile. Also, the movie extols hard work and honoring one’s parents at one point. Finally, one major song also talks about believing in a promised land. That said, BLINDED BY THE LIGHT contains some foul language and a few light references to the Muslim faith of the hero and his family. So, MOVIEGUIDE® advises strong caution for older children.

(BB, C, P, FR, PC, LL, V, N, M):
Dominant Worldview and Other Worldview Content/Elements:
Strong moral worldview with some Christian, biblical allusions includes a plot where a son and his strict father eventually reconcile, son validates hard work and respect for one’s parents in one crucial scene, and American culture and forgiveness are extolled, marred by some light references to Islam and some political correctness;
Foul Language:
Nine obscenities and four light profanities;
Violence:
A man is beaten up, Pakistani teenager is harassed by a bigoted skinhead, skinhead spits into teenager’s face, marchers get rowdy;
Sex:
No sex but a couple scenes with kissing;
Nudity:
Upper male nudity in one scene;
Alcohol Use:
No alcohol use;
Smoking and/or Drug Use and Abuse:
No smoking or drugs; and,
Miscellaneous Immorality:
Some teenager rebellion and lying, white racism is rebuked, and Pakistani father thinks Bruce Springsteen is Jewish and earlier tells his son to copy what Jews do because the father thinks they are so successful.

BLINDED BY THE LIGHT is a toe tapping musical about an older teenage Pakistan immigrant in England, in 1987, who’s disgruntled by his father’s disciplinarian style of parenting, but who discovers the joys of Bruce Springsteen’s music, which encourages the boy to pursue his love of writing. BLINDED BY THE LIGHT is a delightful piece of entertainment that captures the best of Springsteen’s early music. The boy learns to respect his father, and the father learns to acknowledge his son’s talent, but BLINDED BY THE LIGHT contains some foul language, light references to the family’s Muslim background and some political attacks on Prime Minister Margaret Thatcher’s rule that may upset viewers.

The movie opens with 16-year-old Javed beginning to take classes at his local junior college in his hometown of Luton, England, a suburb of London. Javed’s father, who’s been working at the local GM plant all of Javed’s life, wants Javed to become a lawyer or an accountant, but Javed has dreams of becoming a writer. However, like his father, Javed has no idea how he’s going to make a living pursuing such a career, though he doesn’t tell his dad that he’s signed up for an English writing class.

In his writing class, the female teacher draws Javed out of his shell and encourages his writing. At the same time, Javed runs into another Pakistani student in the halls, a rebel named Roops. Roops tells Javed that all of life’s meaning can be summed up in the lyrics of Bruce Springsteen, about whom Javed knows nothing. Roops hands Javed two cassette tapes of two early Springsteen albums.

After a bad argument with his father one stormy evening, Javed sneaks out of his room with his Walkman cassette player and starts playing one of Springsteen’s songs, “The Promised Land.” The redemptive lyrics and driving music of the rock anthem totally captivate Javed and inspire him to change his life. However, Javbed’s father and his English childhood friend, a punk rocker named Matt, aren’t happy about the changes in Javed’s life.

Everything comes to a head on the day of his sister’s wedding.

BLINDED BY THE LIGHT tells an infectious, heartwarming story. Several fun musical numbers revolve around Bruce Springsteen’s early music, which Javed wants to share with everyone he meets. In one scene, Javed and his new friend, Roops, lock the stuffy college radio DJ out of his studio so they can blast Springsteen’s “Born to Run” to the whole campus. The scene is made even funnier when you consider the fact that the movie notes that, by 1987, Springsteen’s early music is considered old hat by everyone except Javed and Roops. Later, Javed sings a Springsteen song in the public streets to woo a girl in his writing class that he likes.

It’s really very smart for the filmmakers to use “The Promised Land” as the movie’s introduction to the impact of Springsteen’s music on Javed. “The Promised Land” is one of the most inspiring and most redemptive of Springsteen’s songs. It encourages listeners to rise up, be an adult and leave behind all the lies and false dreams that have ensnared them. Then, using biblical imagery, the anthem ends by saying, “Mister, I ain’t a boy, no I’m a man, and I believe in a promised land.”

On first blush, BLINDED BY THE LIGHT sounds like another story of rock and roll rebellion. However, eventually, the father and son in the story reconcile. In fact, the son learns to respect his father, and the father learns to acknowledge his son’s talent. Also, a great uplifting speech by the son has the son telling people, including his family, that Springsteen’s songs have taught him the value of hard work and the importance of respecting one’s parents, while, at the same time, making him realize that people shouldn’t let the “hardness” of the world destroy their better selves. “I want to build a bridge to my ambition but not a wall between me and my family,” he says.

The son’s speech is doubly interesting and compelling if you realize that, although it’s set in England, BLINDED BY THE LIGHT is really celebrating an iconic American voice as it uses Springsteen’s music and lyrics. Although it’s set in England, it also ironically celebrates American cinema’s ability to take two opposing sides, in this case the clash between the father’s traditional view of life versus the son’s discovery of a new world, and reconcile them in an entertaining fashion. This is what happens in many classic Hollywood movies, like Frank Capra’s IT HAPPENED ONE NIGHT, where Clark Cable’s down-to-earth working class reporter finds common ground with Claudette Colbert’s wealthy, exasperated father.

That said, BLINDED BY THE LIGHT has some foul language. Also, the son’s family has a Muslim background, even though the son himself is more of a nominal Muslim. At one point, everyone becomes concerned by attacks on the Muslim Pakistan community from skinheads and other bigoted groups. In one scene, an unknown person has placed a pig’s carcass on top of the local mosque. In another scene, a march by some bigots results in the father being beaten. In the second scene, the movie tries to make an unfounded link between the march and the administration of Prime Minister Margaret Thatcher. Though Thatcher’s administration curbed skyrocketing inflation and increased economic growth, the movie is correct when it claims that the people at the time were concerned about high unemployment under her rule in the 1980s.

Watch BLINDED BY THE LIGHT: