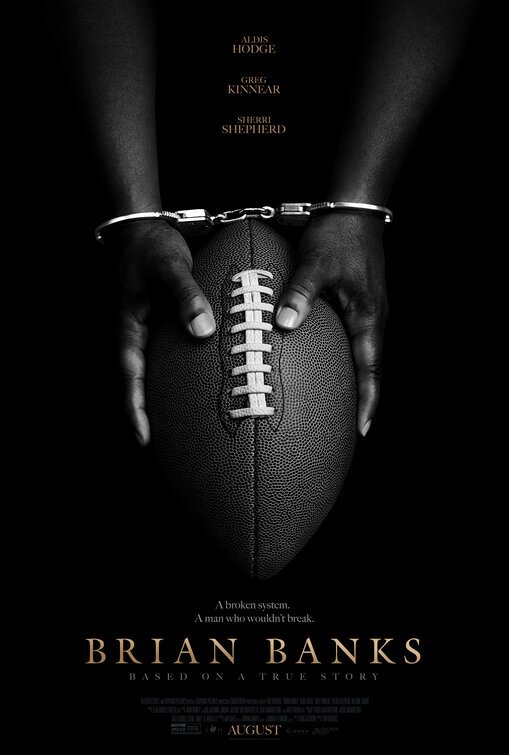 BRIAN BANKS is an inspiring drama based on a true story. Brian is a respectful son, as well as student, and gives his all on the football field, crediting his talent to God. However, when he’s 16-years-old, a girl in his school accuses him of kidnapping and raping her. He’s tried as an adult and serves time in prison for five years, after receiving bad legal advice to accept a plea bargain. Upon release, Brian is determined to prove his innocence and not be legally assigned the title of “sex offender” for the rest of his life. When his accuser unexpectedly befriends him on Facebook, Brian sees a way out.

The acting in BRIAN BANKS sometimes wavers, but the movie tells a captivating, encouraging story. BRIAN BANKS has a strong Christian, moral worldview. It promotes justice and shows that right will prevail. Also, Brian credits his talent totally to God and, encouraged by his mother, prays to God for help and guidance. However, there are a couple “f” words and two strong profanities. So, MOVIEGUIDE® advises strong caution for BRIAN BANKS.

(CCC, BBB, LL, V, S, N, D, M):
Dominant Worldview and Other Worldview Content/Elements:
Very strong Christian, moral worldview where an innocent man, along with a team of people who believe in him, sets out to prove his innocence and get justice after having been convicted of rape, main character gives God the credit for the talent he has for football and is shown praying multiple times to God for guidance, which is encouraged by his loving mother;
Foul Language:
21 obscenities (including two “f” words) and two GD profanities;
Violence:
Very brief, mild violence as a young boy playing football begins to beat up another player but is quickly stopped;
Sex:
Teenagers make out in a stairwell, the main character is falsely accused of rape, and a woman recounts a story of someone sexually abusing and harassing her;
Nudity:
Upper male nudity when character changes his shirt;
Alcohol Use:
No alcohol use;
Smoking and/or Drug Use and Abuse:
A few background characters are shown smoking cigarettes on one occasion but no drugs; and,
Miscellaneous Immorality:
Light miscellaneous immorality such as lying and deception when the false testimony of a few people lead to the imprisonment of an innocent man because of a desire for revenge, and examples of fraud.

BRIAN BANKS is based on a true story about a teenager who once had a promising football career until a girl in his high school class falsely accuses him of a heinous crime, and he gets sentenced to six years in prison.

Brian Banks is a young black man with a very promising career in football, working every day to make sure his dream comes true. He’s 16-years-old and attending summer school when he runs into a girl he knows in the hallway one day. She hints that he accompanies her to a far off building that’s known for people going there to get frisky. He walks with her down the long hallway and down the stairwell where it is empty and far away enough to begin to kiss. They are there for a few minutes when a teacher passes a few floors above them in the stairwell. Brian is quickly spooked and stops immediately, telling her to go out one door, and he will go out another.

Before he knows it, Brian’s being arrested in his bed, with his mother yelling and crying at the police. Brian is falsely accused of kidnapping and rape. Eventually, some bad legal advice from his lawyer convinces Brian to accept a plea bargain with a six year prison sentence.

Now that he’s out of prison, Brian has one thing on his mind: football. He begins playing at Long Beach Community College, but that gets quickly shut down when his parole officer informs him he must start wearing a tracking device. With this device around his ankle, he’s prohibited from coming near a school or park, which eliminates the only thing he loves to do. He’s been searching nonstop for jobs, but once employers see that he’s a convicted felon, they immediately turn him away.

Brian’s mom has always been by his side, and now she encourages him to write again to a program called the California Innocence Project. This group of volunteers works to exonerate people who have been found guilty but are truly innocent. Brian had written to them before but hadn’t received a response. His mother encourages him to write to them, not about his case, but just about him as a person. He tells them about who he is, his love for football, and the promise that he had for a future prior to his conviction.

Brian finally has a team that really believes in him. The California Innocence Project is on his side, and it’s up to all of them to find new evidence to use for him.

Out of the blue, the girl who accused Brian years before contacts him on Facebook wanting to be friends. This gives him an idea. He works with a friend who’s trying to start a private investigation firm. The girl agrees to meet with him, not knowing she’s being filmed by hidden cameras. She admits Brian never kidnapped or raped her, and they have it all on tape. Unfortunately, when they bring it to the California Innocence Project, they learn it’s illegal to film someone without their knowledge and consent, so it’s completely unusable. Brian and his team have to quickly figure out a way to get the fresh evidence, convince the district attorney of his innocence and stop him from being a registered sex offender for the rest of his life.

BRIAN BANKS is an uplifting true story about a man on a quest for justice. When opposite a strong actor like Morgan Freeman or Greg Kinnear, the actor playing Brian Banks, Aldis Hodge, sometimes appears to not be totally able to hold up to the level of talent displayed by his co-stars. However, the movie’s story is captivating and makes up for any weakness from other parts of the production.

BRIAN BANKS has a very strong Christian, moral worldview. It promotes justice and shows that what’s right will prevail. There are also overt Christian elements. For example, Brian credits his talent totally to God and is shown praying to God, encouraged by his mother to look to the Lord for guidance. However, the movie is marred by some foul language, including two “f” words and two strong profanities, that should have been cut. So, MOVIEGUIDE® advises strong caution.