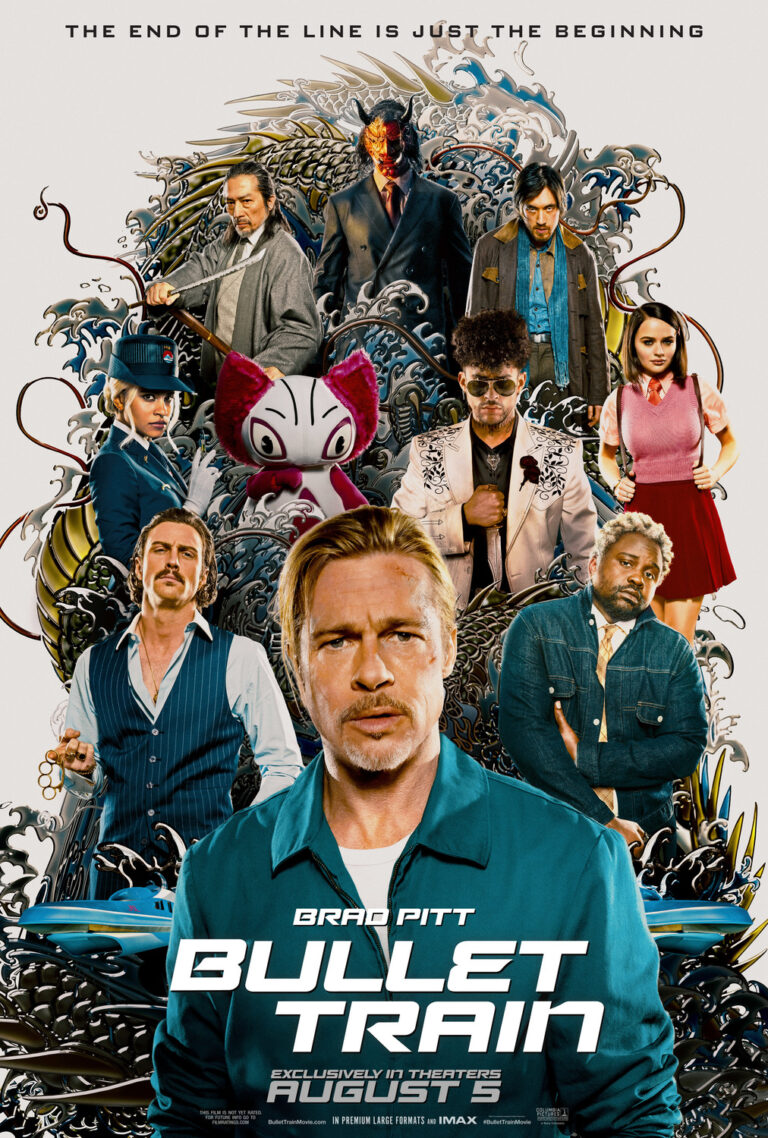 BULLET TRAIN is an ultraviolent action thriller. Brad Pitt plays a hitman who thinks he’s cursed with bad luck. His guru, Barry, has given him a pacifist attitude. His female handler changes his codename to Ladybug and gives him a simple assignment to retrieve a steel briefcase on the Japanese bullet train speeding from Tokyo to Kyoto. Ladybug learns there are five other hitmen with overlapping, conflicting assignments on the same train. He also learns a vicious Russian crime lord, who controls the Japanese criminal underworld, is involved.

BULLET TRAIN is a foul exercise in excess. Despite some spectacular action scenes and clever twists, BULLET TRAIN is sloppily filmed and plotted. There are too many flashbacks in the first act, for example. The movie has lots of bloody violence, more than 120 obscenities and profanities, and a brief bedroom scene. It tells an ultraviolent tale of survival, with many humanist, pagan references to luck and fate. BULLET TRAIN is like a combination of DIE HARD, KILL BILL and a British gangster movie by Guy Ritchie, without any good guys. It’s unacceptable and distasteful.

(HH, Pa, FR, LLL, VVV, SS, NN, A, MM):
Dominant Worldview and Other Worldview Content/Elements:
Strong humanist, anti-family worldview about a brutal fight for survival involving hired assassins, gangsters, thugs, and kidnappers, with the villain being rather cruel to his son and his daughter, who wants to kill her father, a second father is flawed but not evil, and positive mentions of Fate, plus superstitious hitman man thinks he suffers from chronic bad luck but another man talks to him about Fate and the bad luck man eventually concludes that what looks like bad luck at first actually may turn out to be for the good, so he decides to wait and see, hitman also develops a Zen pacifist attitude, mentions his guru, Barry, and doesn’t want to do any more assassinations, and female hitman refers several times to her chronic good luck, but her luck eventually runs out
Foul Language:
At least 112 obscenities (including at least 70 “f” words), three Jesus profanities, three GD profanities, three light profanities, and wedding party starts vomiting blood after they’re poisoned
Violence:
Lots of extreme and bloody violence and lots of strong action violence includes gun backfires and the explosion takes off half of gunman’s head, man’s neck sprays bloody after being wounded, two hitmen slaughter 16 kidnappers, people shoot and fight and stab villainous gangster’s thugs, innocent bystander gets caught in car explosion, another character is poisoned, snake bites man’s arm but man has already taken the anti-venom serum so he survives though it takes 30 seconds for him to know for sure, an injured young boy’s life is threatened, villain and another man engage in an intense fight with samurai swords, two men hang on for dear life outside a speeding bullet train, attempted patricide, briefcase explodes and explosion kills two men, character deliberately hit by a speeding truck carrying tangerines, a spectacular train wreck, etc.
Sex:
Briefly depicted sex between a man and a woman through a window that’s shot from outside the window and implied fornication in a flashback where a man is lying in a bed with a woman
Nudity:
Brief upper female nudity in the depicted sex scene and upper male nudity in another scene
Alcohol Use:
Brief alcohol use
Smoking and/or Drug Use and Abuse:
No smoking or drugs; and,
Miscellaneous Immorality:
Strong miscellaneous immorality includes a flashback to rescuing a kidnapped man being held for ransom, three or more revenge subplots, a betrayal, extortion.

BULLET TRAIN is an ultraviolent action thriller starring Brad Pitt as an American assassin with a new pacifist outlook who discovers there are five other assassins with overlapping assignments traveling on the same fast-moving Japanese bullet train going from Tokyo to Kyoto. Despite some clever plot twists and dialogue, and spectacular action, BULLET TRAIN is plotted and filmed rather sloppily with too many confusing flashbacks in the first act, too much blood and guts, abundant foul language, and a non-Christian, anti-family worldview that talks a lot about luck and fate.

The movie opens with a hitman, played by Brad Pitt, getting an assignment from his handler, Maria, after spending time with his guru, Barry. Maria gives him his new codename, Ladybug. The simple assignment involves retrieving a steel briefcase on a bullet train traveling south in Japan from Tokyo. Maria urges Ladybug to take a gun with him, but Ladybug has a newfound love for peace and just wants easy assignments, with no more killing. All he has with him is some sleeping powder. Maria reminds him that the last time he used it, a man almost died of a heart attack. Don’t worry, Ladybug says, he’s corrected the dosage.

As luck would have it, and Ladybug thinks he’s been cursed with bad luck, the two men with the briefcase are two vicious English hitmen nicknamed Lemon and Tangerine. Lemon is black while Tangerine is white. A flashback shows that the two men have just returned from slaughtering 16 men who kidnaped the son of a Russian crime lord calling himself White Death, who controls the criminal underworld in Japan. Years ago, White Death infiltrated the gang of the previous crime lord, then betrayed him. So, now, Lemon and Tangerine have the son riding safely on the bullet train, while Lemon has put the ransom money in the briefcase in the nearby luggage compartment of the first-class section.

Ladybug easily finds the briefcase in the first-class luggage compartment, takes it and hides it. Meanwhile, Tangerine gets upset when he learns Lemon left the briefcase with the ransom money with the other luggage. They both get up to retrieve the briefcase, but it’s gone. When they return to their seats, they find that White Death’s son has been poisoned to death. The poison is a snake venom known to cause bleeding from the eyes. The poison is the modus operandi of a mysterious assassin called The Hornet.

A fourth assassin is a Japanese criminal named Kimura. He’s tracking down a fifth hitman, a female assassin calling herself The Prince. He thinks she’s the one who pushed his own young son off a building. Kimura wants revenge, but Prince turns the tables on him. She threatens to have his son killed if he doesn’t help her kill White Death, who happens to be her father.

Meanwhile, White Death keeps calling Tangerine to arrange a place and time for him and Lemon to deliver his son and the ransom money. Tangerine keeps stalling him, so White Death decides to meet the bullet train himself at Kyoto.

BULLET TRAIN is a foul exercise in excess. Despite a few spectacular action scenes and some clever twists, BULLET TRAIN is also rather sloppily filmed and plotted. There are too many flashbacks in the first act. For example, there’s a flashback to Lemon and Tangerine slaughtering the 16 men holding White Death’s son hostage. Then, there’s a flashback about White Death infiltrating the Japanese gang and betraying the boss. Finally, there’s a flashback to The Hornet’s most spectacular mass poisoning, where a drug lord’s whole wedding party is murdered. The first act also includes a brief scene of Kimura and his father hovering near the hospital bed of Kimura’s son, who was pushed off the roof by Prince. So, if moviegoers are looking to watch a Brad Pitt movie, BULLET TRAIN is less a star vehicle and more like an international hybrid of a DIE HARD movie mixed with KILL BILL and a British crime movie directed by Guy Ritchie (LOCK, STOCK AND TWO SMOKING BARRELS). Unlike the DIE HARD movies, however, there are no good guys in BULLET TRAIN.

BULLET TRAIN has lots of bloody violence, especially in the first act, which contains many people being slaughtered, including gunfights, samurai swordfights, and people vomiting and pouring blood from their orifices after being poisoned. Another person is killed by the snake poison in the movie’s second half, along with more mages of people spraying blood after being shot or stabbed. The movie also has more than 100 obscenities, including many “f” words, plus several strong profanities.

Ultimately, BULLET RAIN is an ultraviolent, bloody tale of survival. As such, it has a strong non-Christian, humanist, anti-family worldview. First of all, the villain’s family is a mess. Neither he nor his daughter think much of the son. Finally, the daughter wants to kill her father for neglecting her in favor of the son. In addition, the grandfather of the boy in the hospital talks to Brad Pitt’s character about Fate when Pitt’s character, Ladybug, complains to him about his bad luck. At the end of the movie, after he miraculously survives three or so near-death experiences, Ladybug decides that the things which he may consider bad luck often turn out for the better. It’s better to wait and see, he decides.