"What a Tangled Internet We Weave" 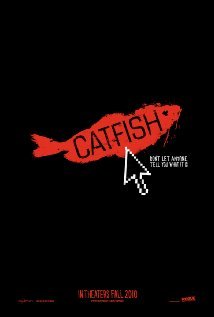 CATFISH is a unique documentary. Nev Schulman is a New York City photographer who lives with his brother and a friend, both of whom are aspiring filmmakers. They get involved with a Michigan family over the Internet, whose 7-year-old daughter, Abby, sent Nev a painting of one of her photographs. Abby’s mom claims Abby’s paintings are selling for thousands of dollars, and they are opening a gallery to showcase her work. Then, Nev starts falling in love with Abby’s older sister, Megan, who has a Facebook page on the Internet. As Nev and his roommates piece together the facets of Megan’s story, they suspect that Megan, along with Abby and perhaps the family, may not be who they say they are.

CATFISH is very entertaining and captivating. It moves at a brisk pace with good editing and riveting twists and turns. The movie’s hook is fascinating while almost being too incredulous to believe. However, the filmmakers claim the movie is absolutely true with no manipulation on their part. This indicates that truth is indeed stranger than fiction. CATFISH has brief foul language and some lewd content, so extreme caution is warranted.

(PaPa, Ab, B, Ro, L, S, N, MM) Strong mixed pagan worldview with some immoral anti-biblical behavior including an overall theme of deception but truth is sought and found eventually; five obscenities and four profanities; no violence; some sexual content such as sexual dialogue and discussions as well as man reads a “sexting” conversation he had with woman via their text messages, man grabs his crotch and some salacious Facebook photos are shown; upper male nudity, man in underwear, swimsuits, and female bare back is shown in picture as well as female cleavage in photos; no alcohol use; no smoking; and, lying and deception is the overall theme of movie, although the filmmakers seek the truth out eventually.

CATFISH is an intriguing documentary that reveals the pitfalls of our virtual world, the dangers of social networking, and the deceptive capabilities of people in an online society.

Nev Schulman is a New York City photographer. He lives with his brother and a friend, both of whom are aspiring filmmakers. One day, Nev receives a package from a 7-year-old girl from Michigan named Abby. The package is a painting of one of Nev’s photos that was picked up in a national newspaper.

Abby and Nev become fast friends, sharing his photos and her paintings back and forth. When Abby’s mom claims that Abby’s paintings are selling for thousands of dollars and that they are opening a gallery to showcase her work, Nev’s roommates grab their cameras to capture this amazing, and unlikely, success story of a hip New York photographer and his partnership with a 7-year-old painting prodigy.

Abby and Nev connect through Facebook, an online social network, and Nev connects with all of Abby’s family, including her mom, dad, cousins, and beautiful sister, Megan. Soon, Nev and Megan begin an online relationship. They chat online; they text each other; they call each other; they photoshop pictures of the two of them together. Nev is quickly falling in love with Megan.

However, as Nev and his roommates piece together the facets of Megan’s story, they have suspicions that Megan, along with Abby and perhaps their entire family, may not be who they say they are. This leads the filmmakers and Nev to go on a road trip to Michigan in order to find out the truth. What they discover is an intriguing tale of deception through the world of social networks.

CATFISH is entertaining and captivating. This 88-minute documentary moves at a brisk pace with good editing and riveting twists and turns. The movie’s hook is fascinating while being almost too incredulous to believe. The filmmakers claim the movie is 100% true with no manipulation on their part. If that is the case, then CATFISH proves that, sometimes, truth really is stranger than fiction.

The movie does contain some cautionary content, of which media-wise viewers will want to be aware. There is some brief foul language, as well as some miscellaneous, mixed pagan worldview elements and an overall theme of deception, although the filmmakers search for and eventually find the truth. There is also some salacious content, such as sexual dialogue, coarse joking, and Nev reads a “sexting” conversation he and Megan had on their text messages. There are also some suggestive and revealing photos of Megan on her Facebook page.

Media-wise audiences and discerning viewers should be cautioned of those content elements when they see CATFISH. That said, CATFISH is a fascinating documentary that reveals the dangers of online networks as well as the pitfalls of today’s virtual world.