"Great, Exciting Exposé of the Evils of Socialist Bureaucracy" 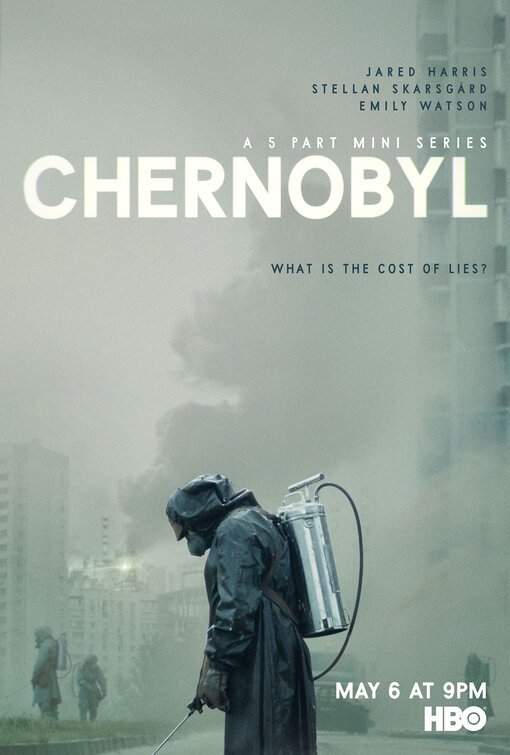 CHERNOBYL is a powerful, edge of your seat, dramatic exposé of the worst man-made disaster when the Chernobyl nuclear power plant in the Soviet Union exploded in 1986, spewing radioactive material across Ukraine, Russia, Belarus, and Western Europe. The series is a search for truth in the midst of a communist bureaucracy’s lies and cover-ups. The story focuses on two scientists and the national head of energy, who work together to limit the disaster’s effects, contain the nuclear meltdown and fight the government because of the potential for similar accidents at other Soviet nuclear plants. Somehow, in the midst of all the lies, the truth is revealed.

CHERNOBYL is a very accurate portrait of a bureaucratic state that tries to control everything with strong secret police. CHERNOBYL brilliantly exposes the failures of Soviet-style communist tyranny. However, the five-part series is hard to watch. There’s a lot of foul language, full male nudity and gruesome deaths and violence. The violence includes having to shoot all the animals to prevent them from bringing their mutated genes elsewhere. MOVIEGUIDE® advises extreme caution for CHERNOBYL.

(BB, ACACAC, LLL, VVV, NNN, A, D, M):
Dominant Worldview and Other Worldview Content/Elements:
Strong moral worldview about the evils of bureaucratic lying and the search for truth regarding the 1986 Chernobyl nuclear power plant explosion in the Soviet Union that caused immense devastation and loss of lives
Foul Language:
29 obscenities (often “F” word)
Violence:
Sometimes very gruesome violence about radiation completely destroying those exposed to it, sometimes over months with their skin disappearing, implied suicide as camera focuses on feet dangling, and threats of violence at an army campy and other government locations, including the KGB or secret police constantly following people
Sex:
No sex but marital kissing
Nudity:
Complete male nudity in scenes of workers who strip to work underneath the nuclear reactor in incredible heat
Alcohol Use:
Alcohol use throughout
Smoking and/or Drug Use and Abuse:
Constant smoking and medical drugs; and,
Miscellaneous Immorality:
Bureaucratic lies, deception, bullying, threats, manipulation.

CHERNOBYL is a powerful, edge of your seat, dramatic exposé of the worst man-made disaster when the Chernobyl nuclear power plant in the Soviet Union exploded in 1986, spewing radioactive material across the Ukraine, Russia, Belarus, and Western Europe. The series is a search for truth in the midst of a communist socialist bureaucracy’s lies and cover-ups.

The first of five episodes features the nuclear scientist Valery Legasov, who realized the scope of the accident and fought the government because of the cost in human lives and the potential for similar accidents at the other Soviet nuclear power plants. The episode opens with Legasov secretly recording the true story on his tape recorder and hiding the tapes, although he’s constantly watched by the KGB. Then, Legasov hangs himself.

Cut to two years earlier when, in a nearby town, a firefighter’s wife, Lyudmilla, sees the explosion out a window. Meanwhile, the nuclear powerplant administrator, Anatoly Dyatlov, bullies his staff with foul language and threats of being stripped of all identity if they don’t follow his orders, which ignore the real situation as his staff tries to tell him. When he’s told the plant has exploded, he refuses to believe. He calls in firefighters, who are exposed to acute radiation by the many pieces of graphite, which are now small engines of nuclear destruction.

In the second episode, Legasov is summoned to report to the Central Committee. Legasov understands from reading the report that the reactor blew up. President Gorbachev and the Central Committee in Moscow don’t believe it and assign the head of energy in Russia, Boris Shcherbina, to go with Legasov to investigate.

In flight, Boris demands Legasov tell him why nuclear radiation is so bad or be thrown out of the plane. Boris moves from being an acute skeptic to realizing the scope of the problem.

Boris confronts the two communist bureaucrats overseeing the project about their disinformation. Legasov convinces Boris to bring in the military to fight the fire and eventually to evacuate hundreds of miles.

Ulana Khomyuk, another nuclear scientist, realizes from her offices in Minsk, miles away, what happened and goes to work with Legasov to solve the problem. Khomyuk tells Boris and Legasov that a massive explosion will occur if the molten core establishes contact with water in the flooded basement. Nuclear plant workers are sent to drien the water at the risk of their own lives.

In the third episode, Legasov realizes a nuclear meltdown has begun, which will contaminate the groundwater and perhaps make most of Eastern Europe uninhabitable.

Miners are recruited to dig under the reactor to try to insert a heat exchanger. The temperature is so bad that the miners work totally nude.

Meanwhile, the firefighter’s wife, Lyudmilla, travels to Mosco to find her husband, and illegally stays with him as he body slowly decomposes before her eyes. She refuses to leave his bedside and stays throughout this gruesome process, which takes weeks.

Khomyuk goes to the hospital to interview Dyatlov and the other staff in the control room to try to find out the truth about what happened.

In the fourth episode, residents are evacuated from large areas around Chernobyl. Military and others are commissioned to kill all the animals in the several hundred mile exclusion zone.

On the roof and the exploded areas of the reactor, men are sent to remove the graphite knowing they’re being sent to their death for the fatherland, because nobody wants to ask the United States for the equipment to help.

Legasov confronts the KGB secret police chief who says that the system works by having everyone tailed by the KGB, including the head of the KGB.

Boris, Legasov and Khomyuk realize they’ll have to testify at the trial and try to expose that every Soviet reactor has the same flaw, which was compounded by bureaucratic stupidity and deception.

The fifth and last episode is the trial. In front of other nuclear scientists, Legasov reveals the problem. Finally, the judge asks why this happened and was told because the government wanted to save money. Somehow, in the midst of all the lies, the truth is revealed. But, the KGB tries to stop the word from getting out and isolates Legasov.

Having done ministry in Russia, Ukraine and Poland, CHERNOBYL is a very accurate portrait of a bureaucratic state that tries to control everything with nefarious secret police. Not only are the people watched, the KGB head is also watched, and he reveals this is the only way they can sustain society. Of course, the alternative is a free society with self-government from knowing the ultimate Truth who will set you free, which is Jesus Christ and His Word Written so that His Holy Spirit keeps you from living in deception.

The series is an incredible indictment of communism, socialism and bureaucracy. It should be watched again and again.

Some in the press have picked apart some of the dramatic devices used to reveal the lies of Marxist socialism, such as one of the nuclear scientists is a fictional character who represents several scientists who were trying to solve the problem. Most of these attacks are either missing the point or very clever disinformation.