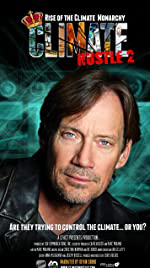 CLIMATE HUSTLE 2: RISE OF THE CLIMATE MONARCHY is an informative documentary available on Vimeo for rent or purchase. The movie exposes the lies and hypocrisy of climate change alarmists like Al Gore. Narrator Kevin Sorbo uses research and scientific testimony to disprove many of these fallacies and hypocrisy. For example, many elite celebrities and politicians claim to care about creating a greener earth, but they personally don’t practice what they preach. The documentary also exposes how children are being brainwashed by government schools to believe climate change lies. If the world’s really going to end so soon, Sorbo asks, why are climate change radicals not panicking?

CLIMATE HUSTLE 2: RISE OF THE CLIMATE MONARCHY is of average quality, but it imparts vital information to viewers. For example, earth’s temperature hasn’t drastically changed since people have kept records and extreme weather patterns are pretty much the same. CLIMATE HUSTLE 2 presents a strong Christian, biblical worldview that rebukes environmentalist extremism and its false theology. Some of the information may go over children’s heads, but the documentary is acceptable for older children and adults.

(CCC, BBB, CapCapCap, V, M):
Dominant Worldview and Other Worldview Content/Elements:
Very strong Christian, biblical worldview refuting climate change alarmism with reference to Noah building an ark, and Kevin Sorbo stands in front of a church, rebukes environmentalist extremism as well as the false pagan religions behind it, exposes politically correct elements, warns against giving up freedoms, and rebukes Marxism and socialism while supporting capitalist ideals of a free marketplace and a free exchange of ideas
Foul Language:
Two expletives are completely bleeped out
Violence:
One scene features a British school ad where children are blown up for refusing to talk to their parents about how to help climate change
Sex:
No sex
Nudity:
No nudity
Alcohol Use:
No alcohol use
Smoking and/or Drug Use and Abuse:
No smoking or drugs; and,
Miscellaneous Immorality:
Some miscellaneous immorality as one person continues to lie, even while giving congressional testimony.

CLIMATE HUSTLE 2: RISE OF THE CLIMATE MONARCHY is a documentary narrated by Kevin Sorbo that exposes the agenda and hypocrisy of climate change and global warming alarmists.

The movie, available to rent or buy on Vimeo, begins with Marc Morano, the founder of Climate Depot, explaining that CLIMATE HUSTLE 2: RISE OF The CLIMATE MONARCHY was supposed to premiere in more than 700 theaters. Due to the COVID-19 pandemic, the movie bypassed theaters and is available through a streaming link. Morano discusses how the COVID-19 lockdown foreshadows the potential lockdowns society could experience at the hands of the climate police.

Next, a small girl dressed as Rep. Alexandria Ocasio-Cortez appears. “Mini AOC,” as she is dubbed, talks about how bad climate change is and how she learned about global warming from the “documentary” ICE AGE 2. The segment is cute but highlights how the inexperienced politician doesn’t understand the reality of what is happening in our world today. As Mini AOC fades out, audiences are greeted by Kevin Sorbo as he slowly begins to unpack the politically incorrect truth about global warming and climate change. Sorbo will occasionally toss the camera back to Morano, dressed like King Louis XIV, in Versailles as the two address the rise of the climate monarchy. They posit that the “facts” the news media feeds consumers are indeed false and that the world is not in any danger of burning up anytime soon.

Sorbo offers a thorough look at the key players in the climate change game. People like Al Gore, Leonardo DiCaprio, Harrison Ford, Barbara Streisand, and more all claim to want a greener earth, but they live hypocritically – consuming more electricity than the average person, flying their dogs around the globe, flying a personal plane up the coast to get a cheeseburger. It’s these actions, Sorbo discusses, that prove we could indeed have a climate monarchy/aristocracy on our hands. The elite demand the proletariat abide by impossible and arbitrary standards while they enjoy the finest luxuries at their fingertips.

The documentary intersperses these revelations in between clips of scientists discussing the truth about climate change. The clips include congressional testimonials where scientists assert that the earth’s temperature hasn’t drastically changed since people have kept records, extreme weather patterns are not increasing, and even the polar bears are increasing, not going extinct like the global warming alarmists would have people believe.

If the extreme assertions by climate change alarmists have been disproven, why do they persist? CLIMATE HUSTLE 2 exposes the roots of the alarmist agenda to be power, control and money.

Visually, THE CLIMATE HUSTLE 2: RISE OF THE CLIMATE MONARCHY feels average. There is no overly impressive footage, nor does the camp get out of control. The movie presents the facts of the other side of an argument which have long been silenced by those with deep pockets. The sources are knowledgeable, and the research is commendable. The graphics leave something to be desired, but the humor keeps viewers engaged. There’s a strong Christian, biblical worldview that references the Bible. Also, Sorbo often speaks in front of churches with steeples. Environmentalism is condemned, as is the false religion built up behind ecology.

The movie has some questionable elements, such as one brief violent scene where children comically explode like volcanoes. Overall, however, CLIMATE HUSTLE 2 teaches valuable media discernment to its viewers. Some children may find it boring, but the documentary supports rational thinking and exposes some of the pitfalls of public education and big government. These are important lessons for children to learn.