"Is Cold Justice That Satisfying?" 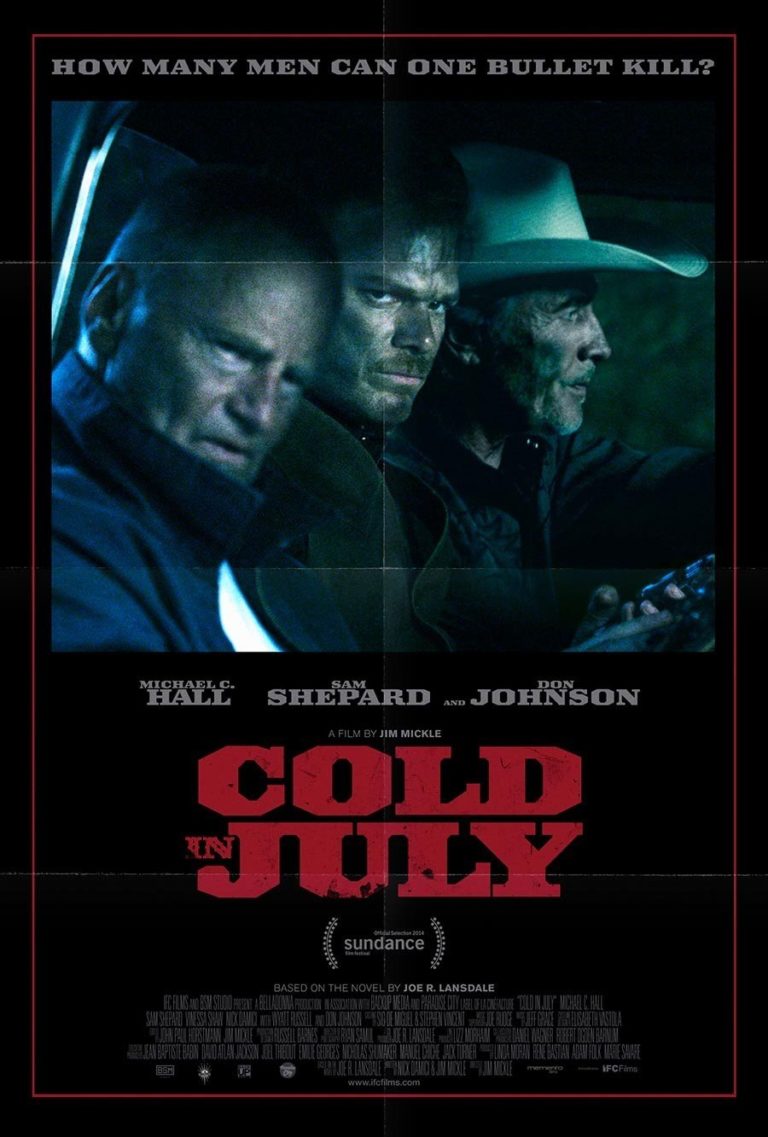 COLD IN JULY is a crime drama set in a small Texas town in 1989. One night, regular family man Richard Dane accidentally kills an unarmed intruder. Considered self defense, the case is shut and the body is buried. The burglar’s father starts stalking Richard and his family and threatens them, but the police catch him as well. Things get even more weird when Richard discovers that the young man he killed wasn’t the person the police said he was. This uncovers a dark plot, and Richard is in it to the bitter end.

COLD IN JULY starts off as an interesting crime thriller with a tinge of mystery. However, as the plot unravels, the story veers down a much darker and more twisted path. Richard seems to have a heavy conscience about the whole situation, which sets him out to find truth and justice, but by the end, it turns into a vigilante bloodbath full of moral ambiguity. Though a certain amount of justice is dealt, it’s neither satisfying nor redeeming. COLD IN JULY is an excessive movie with little value.

(PaPa, C, B, HH, LLL, VV, SS, NN, A, DD, MM) Strong mixed pagan worldview with Christian and biblical references, characters who seek to find truth and justice and who abhor evil, but mixed with some strong humanist vigilante themes and moral ambiguity; at least 40 obscenities (12 “f” words) and 10 strong and minor profanities; strong violence includes many people getting shot point blank with blood splatter, a man smashes a teenage girl with a baseball bat off screen, a man’s ear and hand are shot, a drugged man is discarded on train tracks to be killed; strong sexual themes includes it’s implied that men smuggle underage prostitutes from Mexico and abuse them and then kill them while videotaping the whole thing, viewer sees the video tape briefly of two men messing around with a young girl in bed before they kill her, a sex prison is interrupted and stopped; brief upper female nudity when prostitute is saved, teenage girl in underwear on videotape, bikini models on posters; moderate drinking; light drug use; and, corrupt police officers are never brought to justice.

COLD IN JULY is a crime drama set in a small Texas town in 1989.

Richard Dane (Michael C. Hall) hears noises one night in his family’s home. When he sneaks out of the bedroom with a gun, he sees an intruder. Startled, Richard accidentally fires the weapon and kills the young man, only to find out he was unarmed. The police come and consider the incident to be self-defense. The young man, Freddy Russell, was a low-life burglar and already wanted by the authorities. The police quickly file the death and bury the body at a local cemetery.

Richard can’t seem to shake a feeling of uncertainty, however, especially since Freddy’s father was just released from prison. He also feels guilty over the fact that the young man didn’t attack him and wasn’t armed. When he watches Freddy get buried from a distance, Ben Russell, Freddy’s father approaches his vehicle and threatens him. Immediately driving away, Richard gathers his son and wife and tells the police that his life is in danger. Ben toys with Richard and the police and shows them he can get at them anytime he wants, but the police finally catch Ben.

Just when things look like they might be over, Richard sees a “wanted” picture for Freddy, but the young man on the picture looks nothing like the man he shot. When he starts following the lead detective of the investigation, he sees them capture Ben and throw him on the train tracks to be run over while drugged.

Now knowing that he in fact didn’t kill this man’s son, but the police are trying to cover everything up, Richard springs into action and pulls Ben to safety. Together, Richard, Ben, and a private investigator named Jim Luke begin to uncover what the dirty cops were trying to hide. They discover (SPOILER) that Ben’s son is in the witness protection program, but he’s currently involved in an underground sex ring where he’s killing young girls. The three men set out to stop the evil that Ben’s son is doing.

COLD IN JULY starts off as an interesting crime thriller with a tinge of mystery, but as the plot unravels, the story veers down a much darker and more twisted path. The movie’s second half is almost an entirely different story than the first. Michael C. Hall, most known for his starring role in the TV show DEXTER, is adequate as the dangerously curious family man. About the only great thing the movie has going for itself is the engaging cinematography and the 1980s style music.

Richard’s family is supposedly Christian, but it’s clearly more of a cultural thing than a legitimate choice to follow Jesus. Richard seems to have a heavy conscience about the whole thing, which sets him out to find truth and justice, but by the end, it turns into a vigilante bloodbath full of moral ambiguity. Though a certain amount of justice is dealt, it’s neither satisfying nor redeeming. COLD IN JULY is an excessive movie with little value.