"Soulful Artistry In a Material World" 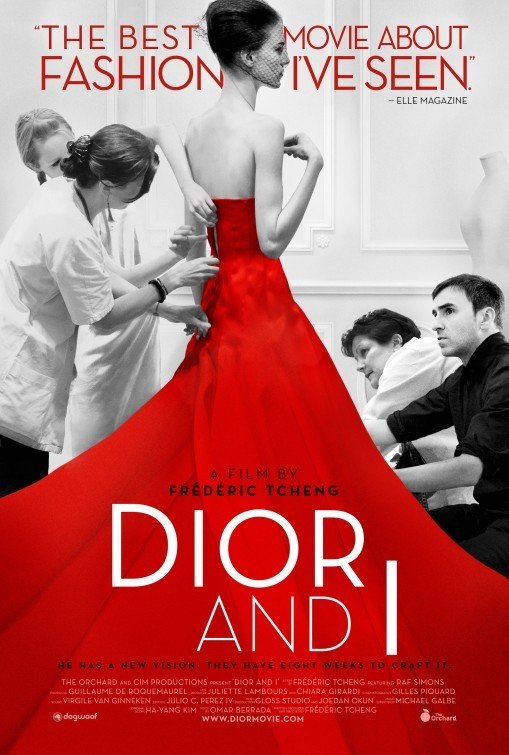 The documentary DIOR & I goes behind the scenes of the Parisian fashion house Christian Dior as new artistic director, Rafe Simons is only given eight weeks to redesign the classic haute couture collection and prove himself worthy of his new position. He is nervous about meeting expectations since his reputation in the fashion industry is one of a minimalist designer, a style he hopes to marry with the more ornate Dior classic design.

The quality of this DIOR & I speaks to its value to entertain those who might not know anything about the fashion industry. Another striking feature is the juxtaposition of the old and the new. Though it is never said, the theme of God's process of creation manifesting itself in humans can be witnessed throughout the whole of the documentary. Despite this, humans are revered as almost godlike in reference to their artistic genius. There is a very materialistic mentality that is present in nearly every scene. A few strong obscenities, cigarette smoking, and light drinking in this documentary make it unsuitable for children. Some caution is recommended.

(H, Pa, Cap, L, Ho, A, D) Very focused on human achievements with no acknowledgement of God, very focused on material things such as fashion, shows inner-workings of a business; total of 4 obscenities; no violence; one of the shop workers jokes that she'd date a guy if he weren't homosexual; no nudity; some scenes with light drinking at fashion events; and, a couple of scenes with cigarette smoking.

The documentary DIOR & I goes behind the scenes of the Parisian fashion house of Christian Dior as new artistic director, Raf Simons, begins his first day overseeing a staff of more than forty people. With his right-hand man, Peter, by his side, he addresses his new colleagues in broken French and tells them how humbled he is to be stepping into the shoes of his legendary predecessor. Raf is nervous about meeting expectations, especially since his reputation in the fashion industry is one of a minimalist designer, a style he hopes to marry with the more ornate Dior classic haute couture. The workers serving under him are eager to see what he creates, but are a little cautious about his ability to pull it off.

Part of this documentary’s fascination is that it focuses on the people working alongside Raf just as much as it focuses on him. Their individual stories are told and the pressures of their jobs are brought to the forefront. It becomes a precarious balancing act as they try to meet the demands of their high-end clients while also striving to complete Raf’s designs before the deadline.

A particularly likable fellow, Peter gets stuck in the middle as the liaison between Raf and those who go to work implementing his creative vision. Although Raf enjoys getting to know his staff and prefers to spend hands-on time with them in their workspace, his naïveté of the complex work that haute couture requires invokes unrealistic expectations upon an already stretched staff. At one point, he loses his temper when one of his key people must fly to New York and work with a client, which makes her an hour late getting back to put the finishing touches on some dresses that must be shown that day.

Although Raf has yet to prove himself as a haute couture master, his competency and passion as an artist is clear as he is brought to tears on more than one occasion at the sheer beauty of human artistry and the realization of his own creations. His attention to detail and demands for perfection offer a peek into the mentality of a world-class businessman and artist. Watching him becomes an inspirational treat for his staff, and despite his shortcomings in dealing with people, he manages to win them over in the race to the finish line. The eyes of the entire fashion industry are upon Dior as the day approaches when his new Dior collection is revealed in an extravagant runway show. As someone who does not like to be in the limelight, Raf must contend with the barrage of media attention and anxiety over whether he will be a success as a haute couture designer for one of the most respected fashion houses in the world.

The quality of DIOR & I speaks to its value to entertain those who might not be fashion conscious or know anything about the fashion industry. Its appeal mostly lies in the process of watching haute couture artists bring their masterpieces to life amongst the chaotic schedules they’ve been given. Their individual personalities bring an element of fun to what could otherwise be a rather boring documentary. Another striking feature is the juxtaposition of the old and the new. Christian Dior has a storied history within the fashion industry, and Raf takes great pains to stay true to the original classic haute couture made famous in the mid-twentieth century while upgrading it for modern tastes. In surreal scenes, the lights go out at the end of the night in the workshop as vintage scenes of Christian Dior designing in that very space play out on the projector-like fabrics of dresses and jackets. It gives a sense of eminence to the craftsmanship of the current Dior team.

Raf points to the beauty of nature as being an inspirational source of his artistry. Though it is never said, the theme of God’s process of creation manifesting itself in humans can be witnessed throughout the whole of the documentary.

Despite this, humans are revered as almost godlike in reference to their artistic genius. There is also a very materialistic mentality that is present in nearly every scene. Models are treated like dolls as they are judged solely on physical traits. People allow themselves to get worked up over seemingly unimportant things such as the nuances of a designer jacket. Although an artist always wants to put forth their best effort, there is a fine line between using creativity to add meaning to the world and getting so caught up in one’s own creations that they become the center of the universe. The old adage that we are living in a materialistic world certainly rings true in this movie. There is a small amount of strong curse words, cigarette smoking, and light drinking in this documentary that make it unsuitable for children. Some caution is recommended for adults.