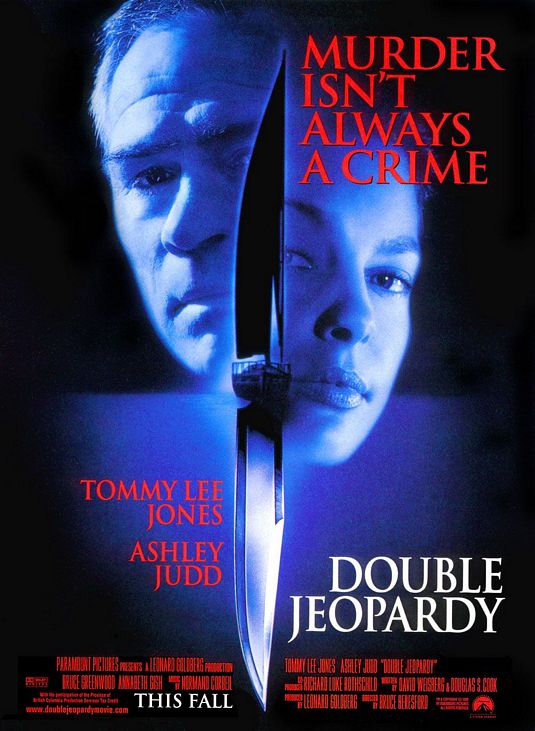 In DOUBLE JEOPARDY, a woman escapes her parole officer to find the son stolen from her by her husband, who faked his own murder. Rather mundane and familiar, DOUBLE JEOPARDY is fairly exciting at times and mostly moral, although it includes plenty of foul language and a gratuitous sex scene between a married couple.

Mild moral worldview with moderately strong pagan elements & some anti-moral implications that, happily, are not really carried out or applauded; 39 obscenities & 16 profanities; some scary mostly action violence, including woman finds vast amount of blood indicating a murder occurred, police chase burglar, woman on parole tries to break out of custody, people struggle in & out of sinking car, man knocks out woman & places her inside coffin with decayed corpse, & final shootout leaves one person wounded, another dead; one scene of obscured depicted sex between married couple; upper nudity; alcohol use & drunkenness; smoking; and, adultery, fraud, burglary, & stealing.

Paramount’s thriller DOUBLE JEOPARDY, starring Ashley Judd and Tommy Lee Jones, has a great advertising campaign that highlights the premise behind its title and promises some chills, but the premise turns out to be a red herring and the chills are a little bit of a letdown.

As the ads for the movie make clear, a woman, Libby, is sent to prison when her husband is apparently murdered. In the movie, she wakes up to find her husband missing and a trail of blood leading topside to the edge of a sailboat they are thinking about buying. In prison, Libby finds out her husband is still alive and faked his death to run off with her best friend, with whom she left her little 4-year-old son. In prison, another inmate, who used to be a lawyer, tells Libby that she can now murder her husband for real. The inmate used to be a lawyer and believes that the double jeopardy amendment of the U.S. Constitution means Libby cannot be tried a second time for the murder of her husband. Eventually, Libby breaks her parole and finds her husband living under another identity in New Orleans. Will she exact her revenge, or does she just want to force her husband to return the little boy, her son, whom he so cruelly snatched from her six years ago.

DOUBLE JEOPARDY just goes through the motions in the first part of the movie. The husband disappears, and the wife sent to prison in very rapid succession, as if the director was in a great big hurry to get to the fun part of the plot. This worked in another similar movie, THE FUGITIVE, with Harrison Ford, because the filmmakers used very little dialogue to set up the premise, while DOUBLE JEOPARDY delays the real action by having the protagonist interact with people and handle small situations that become almost completely unimportant later during the meat of the story. There is, however, an exciting, unique action scene on a ferry part way through the movie, even though the rest of the action seems rather mundane or familiar.

Still, the movie has a mild moral worldview, because Libby’s main goal throughout the story is not to exact revenge but to reunite with her son. That gives DOUBLE JEOPARDY a sympathetic moral center that contradicts the premise about double jeopardy, which turns out to be a red herring. The movie has plenty of foul language, however, and a gratuitous sex scene between the married couple. There’s also a scary scene where Libby’s wily husband knocks her out and buries her alive in a coffin with a corpse.