EYE IN THE SKY 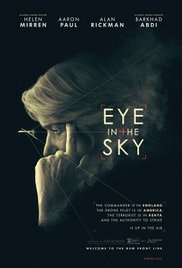 EYE IN THE SKY is a war drama that may attract many viewers because it’s the last movie actor Alan Rickman filmed before he died. Helen Mirren stars as a British colonel commanding a top secret military operation. When a mini drone shows some terrorists are planning a suicide bombing, she orders a bombing strike. However, conflict arises when the American pilot refuses to pull the trigger after a 9-year-old girl enters the kill zone. The conflict is passed up to the highest political officials to make the final call to kill or not to kill.

EYE IN THE SKY is a typical war movie because it tells the story from the view of political decision makers, not troops. This gives the movie a unique perspective. With an outstanding cast, the acting is first-rate, but the arguments go around in circles. When the debates finally end, however, the movie becomes an engaging drama filled with heightened suspense. EYE IN THE SKY has a strong moral worldview, but there’s plenty of foul language and some graphic violence. So, MOVIEGUIDE® advises extreme caution.

(BB, P, H, LLL, VVV, D, MM) Strong moral worldview with some patriotic elements where British and American leaders seek to rebuke evil, a pilot is ordered to bomb some terrorists, but his compassion toward one girl’s life takes over, the pilot’s persistence to save one girl when 80 are at risk subtly makes reference to the Biblical parable of the lost sheep (every life matters even if it’s just one); 31 obscenities and profanities; extreme violence includes excessive amounts of blood and gore, disturbing images of terribly wounded people and dead people with skeletal faces, woman’s hands smashed under debris, images of a man with legs blown off, man is beaten by guards, guards push locals forcefully with guns, small village bombed causing buildings to shatter and destroying part of a village, terrorists burned alive, shootings, military attacks, smoke and fire erupt from bombings; no sexual content, just one hug exchanged between husband and wife; no nudity; no alcohol use; some smoking but no mention of illegal drugs; and strong miscellaneous immorality includes revenge, lying, self-righteousness, and terrorism.

EYE IN THE SKY is an insightful war movie about the internal challenges people face during war. A female British colonel is asked to lead a secret drone mission to kill a terrorist group in Kenya, but the plans change when the pilot refuses to carry out the mission after he discovers a 9-year-old lingering in the kill zone.

EYE IN THE SKY opens up with a happy little girl from Kenya dancing in her village, shedding light on a blissful moment that won’t be for long. The scene ends abruptly and cuts to a tense military base where a female British Colonel named Powell has been put in charge of a top secret operation to capture terrorists in Kenya. Colonel Powell is a sharp, no nonsense woman who wants this mission completed quickly. American pilot Steve Watts, a recent college graduate, who joined the military to “pay off his student loans,” is ordered to carry out this mission. Carrie, a woman about his age, joins him in the aircraft to carry out the mission. What at first looks like a romantic relationship emerging between the two, alone in the sky, is quickly put to rest when a crisis emerges.

While they are in the sky, the stakes rise significantly after Colonel Powell discovers (thanks to the use of a bug shaped drone) the terrorists are planning a suicide attack that would result in the death of 80 people. Powell orders Watts to bomb the place at once, but when the young girl enters the kill zone, he refuses to do it. Knowing the suicide bombers could attack any moment, Powell orders him to strike again, but he won’t budge. Their disagreement triggers an international dispute, which is passed on to high-level American and British government officials to make the final call to kill or not to kill. The stakes are high, knowing if they bomb the terrorists and risk killing the life of an innocent girl, they may lose the propaganda war and perhaps the support of the people if news leaks out about an innocent death.

The stakes are raised furthermore when the drone watching the suicide bombers inside the home cuts out. After their man on the ground, disguised as a local from Kenya, is attacked by military officers, the US and British officials have no way to get another drone back in the home to see what’s happening. The leaders have to make a decision fast. Do they risk 80 lives for the life of one little girl?

The movie’s ending implies that innocent people will always suffer most in a war. [SPOILERS FOLLOW] After the two pilots return to base, shaken from their experience, their military leader tells them, “Get some rest. You have 12 hours before work begins.” This statement is one of the movie’s major themes, showing the tragedy soldiers endure daily comes at the end of the day after their mission. Their job can be a tragic, soul crushing and agonizing job they must learn to cope with forever.

EYE IN THE SKY is not your typical war movie because it often tells the story from the view of political decision makers, not troops on the ground. This gives the movie a unique perspective. With an outstanding cast, the acting is first-rate, but the scenes of disputes among the British colonel, the pilot, and American and British government officials are too lengthy. In fact, it sometimes seems like their arguments go around in circles. When the debates finally end, however, the movie becomes an engaging drama filled with heightened suspense. EYE IN THE SKY has a strong moral worldview, but there’s plenty of foul language and some graphic violence. So, MOVIEGUIDE® advises extreme caution.