"Let God Work Through You" 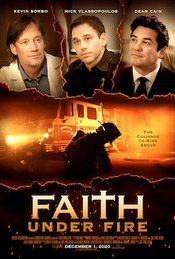 FAITH UNDER FIRE is a powerful, heart-rending drama. Tom Hatcher is the best firefighter in his firehouse. Though he can save lives, he couldn’t save his wife’s life two years ago when she died from cancer. Now his 6-year-old daughter is getting treatment for a cancerous brain tumor. The new pastor at his late wife’s church reaches out to Tom, but Tom just punches him in the nose. The pastor doesn’t give up. The only person who might be able to help Tom rediscover his connection to God is his ailing, bedridden daughter.

FAITH UNDER FIRE is a very well-acted, tearful drama. There are some lighter moments, but the ending delivers an emotional wallop. The movie advises people to let God work through them. It also teaches that God is the Redeemer of broken things and that Jesus stands at the door and knocks. FAITH UNDER FIRE encourages people to pray, attend church, read the Bible, have faith, and to be a light to others. Caution is advised for younger children due to themes of sickness and death in FAITH UNDER FIRE.

(CCC, BBB, V, AA):
Dominant Worldview and Other Worldview Content/Elements:
Very strong Christian, moral worldview advising viewers to let God work through them and teaching that God is the Redeemer of broken things and that Jesus stands at the door and knocks, with many positive encouragements to pray, attend church, read the Bible (including specific references to Ecclesiastes 3:1-8 and John 16:33), see God’s love around us, have faith and hope, and to be a light to other people
Foul Language:
No obscenities or profanities
Violence:
Man punches pastor in the nose, firefighters fights a big house fire and run into the house to rescue a little girl, and scenes are set in hospital where man’s wife died, and his young daughter is getting treated for a cancerous brain tumor
Sex:
No sex
Nudity:
No nudity
Alcohol Use:
Some alcohol use and man seems a bit tipsy during a New Year’s Eve party where couples are dancing and kissing
Smoking and/or Drug Use and Abuse:
No smoking or drugs; and,
Miscellaneous Immorality:
Nothing else objectionable.

FAITH UNDER FIRE is a powerful heart-rending drama about a fireman whose Christian faith is challenged when his wife dies of cancer and his 6-year-old daughter develops a cancerous brain tumor. Despite its heart-rending story, FAITH UNDER FIRE presents an important, spiritually uplifting Christian message that will bring faith, hope and comfort to any person facing suffering and tragedy. Caution is advised for younger children due to themes of sickness, death and dying.

The movie opens with the story’s heroic fireman, Tom Hatcher, saving the life of a little girl during a raging house fire. The story soon reveals that Tom lost his wife to cancer two years ago, and now his daughter, Tiffany, is in the hospital getting chemo treatments for a cancerous brain tumor.

After his wife’s death, Tom stopped going to their church. One Sunday, however, he goes to their old church, where the new pastor, Dan Underwood, starts to preach a sermon about dealing with pain and suffering based on Ecclesiastes 3:1-8. Tom angrily interrupts the service. Pastor Dan comes down from the pulpit to talk to Tom in front of everyone. When the Pastor mentions the benefit of having faith in God, Tom replies, “I’m all out of faith.” Tom then punches Pastor Dan in the nose and ends up in jail.

The next day, Pastor Dan bails Tom out of jail and offers him a ride home. Tom reluctantly accepts. Tom apologizes to Dan for punching him in the nose, but he still doesn’t want to talk about God or Jesus with Dan. Despite this, Dan tells Tom he’ll gladly talk with him any time Tom wants.

Tom refuses not only to talk with Pastor Dan about his suffering. He also doesn’t want to talk with anyone else about it, including his best friend, David, and the young nurse he starts talking with in the hospital cafeteria. It seems only one person might be able to help Tom rediscover his connection to God. His ailing, bedridden daughter.

FAITH UNDER FIRE is a very well-acted, tearful drama about coping with tragic situations. Nick Vlassopoulos delivers a poignant performance in his first leading role on the Big Screen as Tom. Playing his daughter, Tiffany, is a relative newcomer named Tenley, who turns in a heartbreaking but winsome and appealing performance. They are extremely well supported by Dean Cain as Pastor Dan and Kevin Sorbo as Tiffany’s compassionate doctor.

FAITH UNDER FIRE has a strong Christian worldview that’s very inspirational. The movie advises viewers to let God work through them. It also teaches that God is the Redeemer of broken things and that Jesus stans at the door and knocks. In addition, FAITH UNDER FIRE has many encouraging messages. It urges people to pray, attend church, read the Bible, see God’s love around us, have faith and hope, and to be a light to other people. Caution is advised for younger children due to themes of sickness, death and dying in FAITH UNDER FIRE.