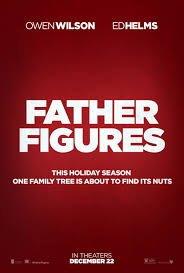 FATHER FIGURES tells the story of two fraternal twin brothers, who have spent their lives clashing. Kyle, a laid-back wealthy beach bum, and Peter, an uptight divorced doctor, attend their mother’s newest wedding. They discover their mother has been lying about having a dead father. Kyle and Peter decide to put aside their differences to search for their real father. This leads to a road trip with several encounters with men across America, who reveal embarrassing stories about their mom. Among the men they meet are NFL Hall of Fame quarterback and TV announcer Terry Bradshaw and an amoral thief.

FATHER FIGURES is an uneven comedy. The brothers amble too easily into meeting their potential fathers. The movie veers awkwardly from being too crass one moment and sad, sweet and emotional the next. As a result, the movie has a strong mixed worldview with strong Romantic, immoral content and behavior and strong positive content embracing family, forgiveness, and a pro-life twist. FATHER FIGURES has lots of foul language, including many obscenities and more profanities than usual. Extreme caution is advised.

PaPa, RoRo, AbAb, BB, C, LLL, VV, SS, A, DD, MM) Mixed pagan worldview with strong Romantic, lawless, immoral elements featuring crass behavior and strong moral elements promoting family, overcoming sibling rivalry, a pro-life twist, and forgiveness; at least 88 obscenities (at least 59 “f” words), eight strong profanities, nine light profanities, and man and boy urinate on each other in the bathroom as part of a prank fight; strong and light comic violence includes man steals car but winds up getting out and comically hit by another car, men fight in car and narrowly escape locomotive as it runs into car on railroad tracks, man shoots after two men to scare them away from his sports car, three men fight, man shot in back with tranquilizer gun, mother hits sons with bouquet; sexual jokes and innuendoes are a running theme in the movie and include two brothers have to endure hearing their various potential fathers discuss their mother’s wild past sexual behavior in graphic and lewd comical terms, other crude sex talk, passionate kissing before implied fornication; no explicit nudity but woman appears in bra and panties; alcohol use; no smoking but talk of past drug use; and, stealing cars, lying, and woman has lied to her two sons for years.

FATHER FIGURES tells the story of two brothers, a laid-back wealthy beach bum and an uptight divorced doctor, who were born fraternal twins and have spent their whole lives clashing, but then have to get along when they go in search of their father. FATHER FIGURES is an uneven, often annoying comedy and has a strong mixed worldview with strong Romantic, immoral elements making crude jokes about sexual promiscuity and strong positive elements embracing family, forgiveness, and a pro-life twist. It also has lots of strong foul language.

Kyle (Owen Wilson), the beach bum, and uptight doctor Peter (Ed Helms) have clashed their entire lives. They reunite at their mother’s latest wedding, where she reveals to them that the man they thought was their father, whom they never knew but were told had died when they were babies, was not. They decide to put aside their differences to go in search of their real father. This leads to a complicated road trip and several embarrassing encounters with men across America, who reveal embarrassing sexual stories about their mom.

Among the men that they try to meet are NFL Hall of Fame quarterback/TV announcer Terry Bradshaw and an amoral thief (J.K. Simmons). While the men they seek are eclectic and each provide a few moments of interest or whimsy, ultimately the weak script by Justin Malen doesn’t ever raise the comedic or emotional stakes for viewers to truly laugh or care.

The brothers amble way too easily into meeting Bradshaw and the other men they seek to know, and their encounters with them also end too abruptly. While similar crass sexual jokes are a running and repeated theme in the movie, it also errs on the side of trying to be too sweet and emotional too. It seems that every time a scene or scenes are building to some major surprise comic payoff, some horrible, sappy music score is played, and the brothers just sit down and look sad and perplexed.

Rated R, FATHER FIGURES wants to be a raunchy comedy that’s crude and gross one moment and sweet and kind the next. The resulting mix is simply too annoying to satisfy media-wise viewers or fans of crude comedy. Moviegoers should exercise extreme caution with both their wallets and their conscience.