"Separating Reality from Fantasy Is a Matter of Life and Death" 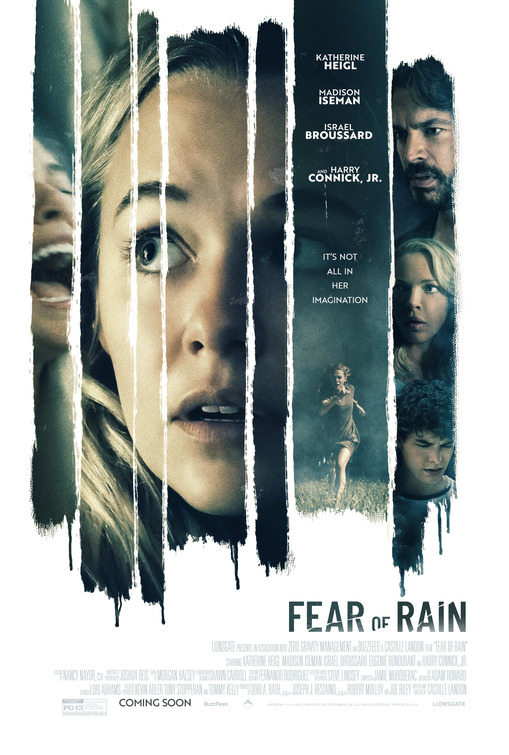 FEAR OF RAIN is a psychological thriller about a schizophrenic high school teenager named Rain who has episodes that take her in and out of reality. Rain’s delusional episodes get worse whenever she doesn’t take her medication. One evening, Rain hears a scream from the house next door, which is owned by her female teacher. Rain begins to believe her teacher has kidnapped an innocent young girl. Rain hatches a scheme to sneak into her home to verify her suspicions. Are Rain’s suspicions real, or is she just suffering from schizophrenia?

FEAR OF RAIN is an intense, entertaining, well-acted psychological thriller. It has a strong moral worldview. For example, the title character constantly pursues the truth. Also, the movie promotes parental love, friendship and helping people in trouble. In one scene, the protagonist makes a reference to people having faith in God, even though she doesn’t. Regrettably, though, there are some occult references, including some Tarot cards that show up in a magic trick. MOVIEGUIDE® advises extreme caution because of this occult content, plus some foul language and scary violence in FEAR OF RAIN.

(BB, C, OO, LL, VV, S, N, MM):
Dominant Worldview and Other Worldview Content/Elements:
Strong moral worldview overall where the protagonist is in constant pursuit of the truth and her parents utter many times “I love you” and care for her with intentionality and including themes of rescue and friendship that add to the movie’s positive morality, plus there’s some angel statues in a cemetery, and one instance where the protagonist makes a reference to people having faith in God even though she doesn’t, marred by two scenes where a teenage boy uses Tarot cards for a magic trick when he easily could’ve used a regular deck of cards and some scary occult imagery that viewers must discern if it’s a hallucination or not
Foul Language:
11 obscenities (including two “f” words) and six profanities, including one mentioning Christ
Violence:
Strong violence includes teenager accidentally cuts her finger while slicing veggies, but there’s no depicted blood, reference to a suicide attempt, and a voice inside a teenagers head tells her to kill herself, kidnapping, a mentally ill teenager has scrapes on her person from manic episodes and she holds a knife in a few scenes thinking it will help her fend off the voices in her head, woman kills herself by hanging, father strikes his teenage daughter across the face in anger, blood filters out of a shower and an angel statue’s eyes, and choking
Sex:
No premarital sex or other sexual immorality, but teenagers share a kiss
Nudity:
No explicit nudity but some dolls and mannequins appear without clothes, but there’s no graphic detail
Alcohol Use:
No alcohol use
Smoking and/or Drug Use and Abuse:
No smoking or illegal drugs, but teenager takes prescribed medication for schizophrenia, and doctors use a syringe to sedate a manic patient; and,
Miscellaneous Immorality:
Dismissive friends, gossip, name-calling, breaking and entering depicted in more than one scene, and some dysfunctional family portrayals.

FEAR OF RAIN is an intense psychological thriller about a teenage girl with schizophrenia who suspects her neighbor of kidnapping a girl. FEAR OF RAIN is an entertaining, well-acted thriller, with a strong moral worldview promoting parental love, friendship and truth, but it’s marred by some occult references, foul language and some scary violence.

The movie begins with high intensity. A girl runs through a cemetery while being followed by some hooded figure. Despite the girl’s attempts to break free, she’s buried alive until she busts up from the ground to her freedom. Cut to a hospital. The same girl is being held down by doctors and nurses until she’s injected with a tranquilizer of sorts until she calms down entirely.

Viewers learn that the girl’s name is Rain and that she has schizophrenia. Her parents, John and Michelle, don’t want her to go to a psychiatric facility. However, Rain’s episodes get worse when she doesn’t take her medication. Rain returns home to a disheveled bedroom, probably from a manic episode. At school, all her friends have deserted her. Also, they gossip about her condition behind her back. Thankfully, Rain finds a friend in a teenage boy named Caleb, who seems to fancy her, even though she’s just trying to make sure he’s real and not a hallucination in her head.

One evening, Rain hears a scream from the house next door, which is owned by her female teacher. Rain begins to believe that her teacher has kidnapped an innocent young girl and begins to hatch a scheme to sneak into her home to verify if it’s the truth. Caleb accompanies her, and they bond over their pursuit.

After the female teacher unearths that Rain is spying on her, she informs John, Rain’s father. He’s beside himself with frustration. How can he keep Rain from scaring others or being a danger to herself? Still, he’s about to sway the teacher to hold off on any charges for the time being so that Rain won’t end up in a facility.

Despite John’s best efforts and motherly affection from Michelle, Rain can’t seem to shake her concern for the young girl who might be held against her will in her teacher’s home. Is Rain worthy to be feared? Or, is her teacher a villain?

FEAR OF RAIN follows the style of many thrillers. Several shots are handheld and eerie music introduces the leitmotif of fear and paranoia. Katherine Heigl (27 DRESSES) and Harry Connick, Jr. (P.S. I LOVE YOU) are great parents in the movie. Their onscreen daughter, played by Madison Iseman of JUMANJI: THE NEXT LEVEL, is convincing as a high schooler with schizophrenia. Sporadically, Rain’s thoughts are literally written out across the screen for a stylistic touch. Thriller fans will find the movie intense and entertaining.

FEAR OF RAIN has a strong moral worldview. For example, the title character constantly pursue the truth. Also, her parents utter many times “I love you” and care for her with intentionality. In addition, the movie also has themes of rescue and friendship that add to its positive morality. There’s one instance where the protagonist makes a reference to people having faith in God, even though she doesn’t. Regrettably, though, in two scenes a teenage boy uses Tarot cards for a magic trick when he easily could’ve used a regular deck of cards. MOVIEGUIDE® advises extreme caution because of this occult element, some foul language and some scary violence.