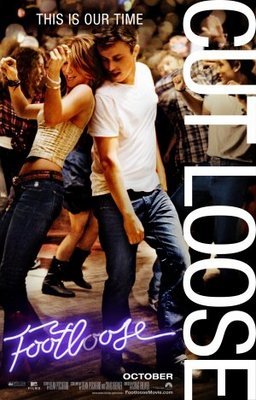 FOOTLOOSE is a remake of the 1984 dance musical starring Kevin Bacon. The story opens with a terrible car crash in a small Georgia town that kills five teenagers, including the pastor’s only son, driving home from an impromptu dance party. In the wake of the tragedy, the town bans non-sanctioned dances, loud music, and lewd dancing. It also institutes a harsher curfew for teenagers. Several years later, 17-year-old Ren McCormick, whose mother just died of cancer, comes to live with his mother’s sister and her husband, a churchgoing car salesman. Ren can’t believe the town’s strict laws. As Ren gets to know the townspeople, including the pastor’s troubled teenage daughter, he decides to challenge the laws against dancing and loud music

FOOTLOOSE has an uplifting, positive ending with strong biblical references, where Ren and the town leaders figure out a compromise. Until then, however, the movie is full of teenage rebellion, plenty of foul language, some implied underage alcohol use, and some lewd behavior. This negative content is combined with an attitude that rules are meant to be broken. FOOTLOOSE is not an appropriate movie for impressionable teenagers.

(Ro, CC, BB, LLL, VV, S, AA, DD, M) Light Romantic worldview featuring acts of sometimes lewd teenage rebellion, promotion of self-expression, and a comment that “rules are meant to be broken,” but mitigated by an ultimately positive view of a conflicted Christian pastor, another Christian character is a very positive role model and leads a dinner prayer with his family, and the teenage protagonist uses the Bible to prove his point and reconcile two sides of a controversial issue; 41 obscenities and three light profanities; two fights occur with girl smashing mug over one guy’s head, mean boyfriend hits girl, father slaps daughter, implied head-on collision kills five teenagers, and teenagers crash a couple school buses during a dangerous “figure eight” race, with one bus crashing into another and making small explosion; implied fornication between 17-year-old preacher’s daughter and older boyfriend, teenage girl acts seductively toward teenage boy, and he crudely mocks her for teasing him, lewd dancing depicted in one scene, and teenage girl in bra waves her blouse around as an underground race begins; no nudity but teenage girl in bra and teenage girls have midriffs and legs showing; underage alcohol use and teenagers visit country dance bar; stoner teenager gets teenage protagonist in trouble by thrusting a couple marijuana cigarettes upon him but he flushes them down toilet in time; and, teenage rebellion, father and daughter have become estranged and daughter keeps acting out, teenage boy gets upset with policeman who pulls him over for playing loud music, and country rock song talks about getting a fake ID.

FOOTLOOSE is a remake of the 1984 dance musical starring Kevin Bacon. Sadly, the new movie has a lot of teenage rebellion and lewd content that taints the uplifting, positive ending.

The story opens with a terrible car crash in a small Georgia town that kills five teenagers driving home from an impromptu dance party on a nearby farm. One of the victims is the only son of the town preacher, Shaw Moore. In the wake of the tragedy, Rev. Moore speaks in favor of a city ordinance that bans non-sanctioned dances, loud music, and lewd dancing and that institutes a harsher curfew for teenagers.

Meanwhile, the pastor’s daughter, Ariel, also 17, has rebelled against her father and taken up with an older boy, Chuck. Chuck takes Ariel for granted but goads her into fornicating with her.

Chuck gets jealous when he sees Ren has taken a liking to Ariel. For her part, Ariel tries to play both boys against one another. In one scene, she tries seducing Ren, but Ren mocks her sexual tease. He realizes she’s acting out. It also becomes clear that Ariel and her father have never gotten over her brother’s death.

Eventually, Ariel breaks up with Chuck and takes up with Ren. Then, Ren decides to challenge the town’s strict laws against dancing. He sets up a senior dance outside the city limits and decides to defend his decision before the town council.

Like the first movie, the most entertaining part of FOOTLOOSE is the title song dance number and the scene where Ren teaches the awkward country boy how to dance, to the jaunty tune “Let’s Hear It for the Boy.” The youthful cast is very good, as are the veteran actors who add some gravitas to the story.

The first two acts, however, have many scenes of teenage rebellion, including lewd behavior and foul language. This changes when the teenage hero, Ren, decides to challenge the laws by using Bible verses like Psalm 149:3 and Ecclesiastes 3:4, which says there’s “a time to mourn and a time to dance. . . .” Ren also tells his fellow teenagers that there will be no lewd dancing or alcohol at their dance. Thus, despite the movie’s earlier scenes of teenage rebellion, the ending offers a biblical resolution of the controversy between the adults and the teenagers. Not only does Ren offer Bible verses, he also compromises with the grief-stricken pastor and town leaders by making the proposed dance less objectionable.

This kind of compromise has long been a trope in many Hollywood movies, where social tensions between rich and poor, men and women, ranchers and farmers, etc., are resolved by a higher law or a larger sense of community. FOOTLOOSE is to be commended for making the position of the pastor and the other grief-stricken parents more understandable. As Producer Brad Weston notes, he and the director wanted to make the parents more sympathetic because “we are both parents of young children.”

That said, the foul language, teenage rebellion, and lewd content in the rest of the movie warrant extreme caution. Consequently, the movie’s Romantic promotion of free self-expression goes a bit too far. One line of dialogue symbolizes this negative content in the first two acts, when Ren tells his new friends, “Rules are meant to be broken.” This content could have been toned down to make a cleaner, more family-friendly movie. As it is, despite the happy ending, MOVIEGUIDE® cannot entirely sanctify this FOOTLOOSE for impressionable teenagers, who might act out the movie’s more objectionable parts. See the CONTENT section above for more details.