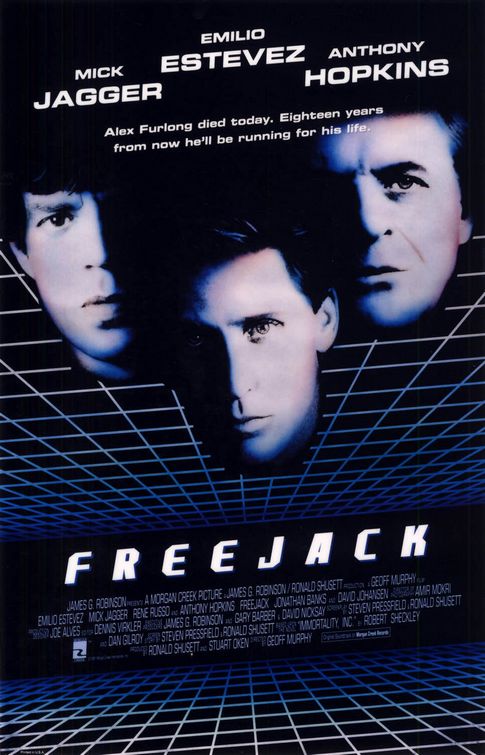 In the movie FREEJACK, race-car driver Alex Furlong supposedly dies in a fiery car crash, but instead, is catapulted into the 21st Century and pursued by body-switching bounty hunters who plan on giving his body to someone else. With full-frontal male nude dancing, extreme violence and a gun-toting nun who spouts obscene language and blasphemy, the film defines mediocrity.

FREEJACK opens with race-car driver Alex Furlong supposedly dying in a fiery crash in 20th Century New York. However, clever body snatchers whisk his body to the 21st Century where they hope to sell it to a new occupant. From this point, the movie is one long, confusing chase in which bounty hunters, led by the sardonic, murderous Vacendak (Mick Jagger), try to retrieve Alex to recycle his body. Controlling everything is the McCandless Corporation headed by a ruthless businessman. In one episode, as the bounty hunters close in on Alex for the umpteenth time, Alex encounters a nun who wields a gun and spouts foul, blasphemous language. Alex manages to escape several times, until he and his love, who defected from serving as McCandless’ right-hand person, drive off into the 21th Century sunset.

Despite some exciting chase scenes and intriguing special effects, FREEJACK loses on all counts: mediocre sets, unconvincing plot and stilted acting. In fact, with male nude dancing, extreme violence and a nun who spouts blasphemy, the film defines mediocrity. As for the body-switching idea to achieve a kind of immortality, eternal life is free for anyone who asks through Jesus Christ.